Italian manufacturer flips the script as the producer of new men's brand SheJi-Sorgere, which launches next month. 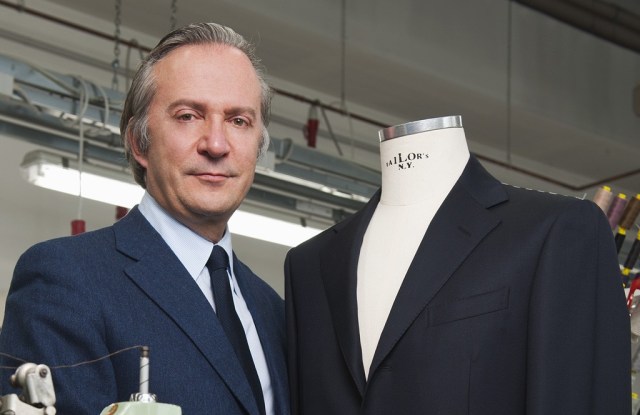 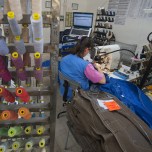 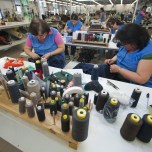 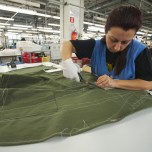 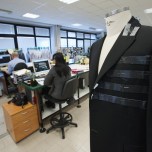 SORAGNA, Italy — Beijing couldn’t seem farther away from the cobblestone streets of the medieval town of Soragna, a one-hour drive east of Milan, with its stately castle filled with Baroque treasures that is still owned by Prince Diofebo Meli Lupi, and its population of less than 5,000. However, there’s a new link between the two cities, a link that centers around fashion.

In an interesting juxtaposition, SheJi-Sorgere, a new high-end Chinese men’s power brand launching next month, is being produced by an Italian manufacturer, Caruso SpA, which specializes in luxury and sartorial men’s wear.

Calling the deal historic, Caruso chief executive officer Umberto Angeloni said the Chinese consumer is maturing rapidly in his appreciation for quality and the benefits of true luxury. “We are talking about powerful people, not merely rich — they are even more important and they are wondering what brand to turn to for the next power suit,” he said, during a tour of the impressive three-building Caruso manufacturing plant in Soragna. “The Chinese consumer is as evolved as the European one. I say, let’s not give them a fake brand, with an improbable Italian name such as Lampo Uomo, Immobile or Vitello. It’s pointless to come to Italy and buy brands that are more or less dead, or brands that are second-tier labels and make believe they are huge. Why not opt for a true Chinese brand made in Italy?”

SheJi-Sorgere, which means “nation” in Chinese and “to rise” in Italian, is owned by China Garments Co. Ltd., a large public company with holdings in fashion and media that is listed on the Shenzhen Stock Exchange. The Chinese government also has a stake in the group.

To design the brand, China Garments tapped Francesco Fiordelli, whose previous stints include posts at Gucci and Hugo Boss, and who has been living in China for the past eight years. “Fiordelli has a very good sense of fashion, he knows Chinese culture and loves it, and the line is a combination of Western and Eastern cultures,” said China Garments ceo Yingjie Zhan, who underscored that the brand will be positioned in the luxury range. The line is expected to “fit with the tradition,” and will include Mandarin necks and suits manufactured from precious fabrics.

“We don’t want to copy European brands. This aims at educated customers who understand quality,” said Zhan, who holds an M.B.A. from State University of New York at Buffalo. The logo for the label nods to both its Chinese and European names with two “S” letters designed to symbolize the rising of a new luxury brand that combines the best of Chinese culture and Italian aesthetics, explained Zhan. The brand will bow on March 30 during Beijing Fashion Week, followed by the opening of a freestanding Sorgere store in that city.

It will be sold only in Sorgere stores, but Zhan declined to be more specific regarding distribution or pricing for the collection.

For Angeloni, the introduction of SheJi-Sorgere comes at a time of strong national pride in China. Upscale Chinese men, he believes, don’t want to depend entirely on foreign brands and have turned to Italy because of its “supremacy” in high-end, sartorial tailoring, similar to other iconic manufacturing hubs such as Scotland for whiskey and Switzerland for watches. He called the deal with China Garments “the mother of all projects,” with enormous “global projections and future historical implications.”

Caruso, while small, nonetheless epitomizes the merger of industrialization and handmade tailoring. Although Angeloni remains tight-lipped and avoids any name-dropping, it is no secret the company produces for top luxury brands ranging from Lanvin to Dior and, most recently, Berluti, as confirmed by its new creative director, Alessandro Sartori. It produces around 2,000 garments a season.

Caruso employs 600 people, mostly women who stitch buttonholes by hand and go through thousands of variations on lapels or pockets, and at least 12 steps of ironing per jacket. Most of these artisans are connected to computers that provide detailed information on the specific designer and garment they’re producing, with as many as 45 itemized data points per job ticket. Each Caruso building is devoted to either cutting, jackets or pants, and one jacket can take up to 12 hours of work to complete. It takes 18 months of training before an artisan is ready to create a jacket’s canvas interlining.

“Virtuoso manufacturing, which goes beyond product manufacturing, has always been Caruso’s mission,” said Angeloni of the firm’s 50-plus years of experience in luxury tailoring.

Since 2009, the executive, who was instrumental in building Brioni into a global lifestyle brand when he was its ceo, has been injecting new life into Caruso, resetting it with cultural references and highlighting its heritage. “It had no precise identity over the past few years,” he said. “We don’t have a big-name designer, stores or ads, but we are reaping the rewards of conveying our message simply through the product.”

The company closed 2011 with sales of 60.6 million euros, or $84.2 million at average exchange rates, up 30 percent from 2010. In 2012, Angeloni expects revenues to gain 16 percent to 70.3 million euros, or $92.5 million at current exchange. Five new brands were signed on with the fall-winter season, said the executive.

The Caruso line, which is available at 360 points of sale, from Neiman Marcus and Lawrence Covell in Denver to Sid Mashburn in Atlanta and Lane Crawford in Hong Kong, totaled sales of 13.1 million euros, or $18.2 million, in 2011, up 16 percent from the previous year.