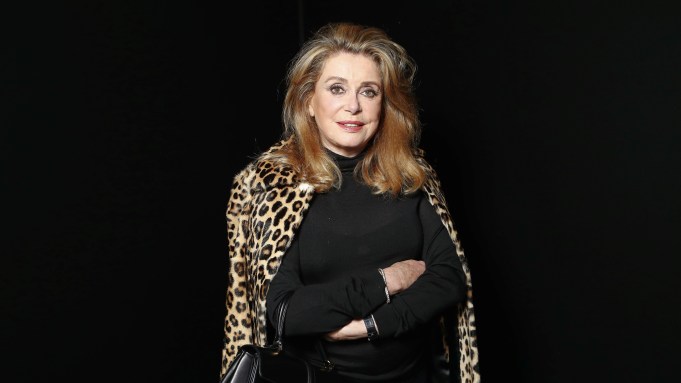 LONDON — It was the sale of her countryside château in Normandy that prompted Catherine Deneuve to let go of her Saint Laurent wardrobe — a varied collection filled with treasures from the Sixties up to the early 2000s and telling the story of a 40-year-old friendship with the late Yves Saint Laurent.

“It’s this big country house with a beautiful garden, because Catherine loves flowers and gardening. She was upset to be selling it, but it got a little too heavy for her, so she had to make the decision to let it go and sell her Saint Laurent wardrobe with it,” said Francois de Ricqlès, president at Christie’s Paris and a friend of Deneuve’s.

De Ricqlès described the château’s vast attic to be filled with the French movie star’s archival Saint Laurent pieces. “She is above a certain age and she found that it would be more joyful to use this time, rather than a sale after death, so she decided to do it herself.”

It’s a big moment for Christie’s, too, which rarely organizes fashion auctions anymore unless there is a certain element of rarity in a collection.

“We would only organize fashion sales if we have [access to] a very special wardrobe like those of Audrey Hepburn, Liz Taylor and Elsa Schiaparelli. These are the only three examples of fashion sales that you could find at Christie’s worldwide, in the last 10 or 15 years,” said De Ricqlès.

Catherine Deneuve’s Saint Laurent sale is particularly exciting because apart from the beauty of the pieces themselves, Deneuve’s persona and the stories of her friendship with the designer are attached to them, adding extra layers of value.

“You get these two stamps, that of Yves Saint Laurent and that of Catherine Deneuve, unified by their 40 years of friendship. Catherine really is the ultimate French star and one of the last remaining stars in the world of cinema in general, so fashion collectors are getting really excited,” added De Ricqlès. “For us and the auction world in general, this is the sale not to be missed this year.”

Although he couldn’t predict how much the sale would generate, De Ricqlès singled out smoking tuxedos and items from the French house’s famous “Russian Collection,” which are some of the hardest to find, among the items that are likely to generate the highest bids.

Other heroes in the collection include a minidress dripping in sequins that Deneuve wore to meet Alfred Hitchcock in 1969; a draped leopard-print velvet number dating back to 1992, which encapsulates the star’s love for animal prints, and a gold lamé halter-neck gown worn at the Oscars in 2000.

Creating the catalogue for the auction, also led Deneuve to revisit some of the stories and memories attached to them.

De Ricqlès said Deneuve often recalls how she met Saint Laurent, after insisting that he dress her for her lead role in “Belle du Jour,” and the elegant, bourgeois outfits he created ended up shaping the role.

Another favorite moment she narrates is the day she met Queen Elizabeth II in 1965, dressed in the first couture gown Saint Laurent ever created of her.

“Catherine is always happy to talk about her friendship with Saint Laurent, but at the same time, she is not looking back behind her, she is someone who is very much living in the present and in the future,” added de Ricqlès.

The auction will take place at Christie’s Paris, against the backdrop of Paris Couture Week, on Jan. 24, while an online sale will run simultaneously from Jan. 23 to 30.