Malandrino was recognized Wednesday night at the French Embassy in New York for her innovative fashion designs that have inspired Americans to take interest in French artistry. 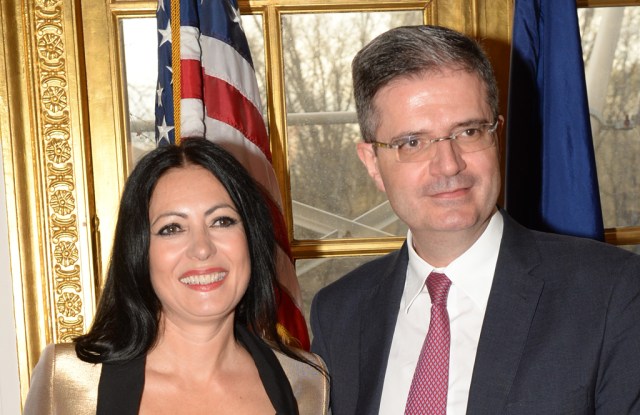 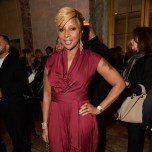 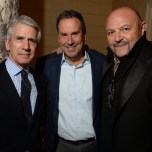 NEW YORK — “You’re the quintessential Parisian and perfect New Yorker. You personify French style,” said François Delattre, French ambassador to the United Nations, in presenting the Chevalier of the French Order of Arts and Letters to Catherine Malandrino.

Malandrino was recognized Wednesday night at the French Embassy here for her innovative fashion designs that have inspired Americans to take interest in French artistry.

Delattre said it was a “great privilege” to honor Malandrino, whom he called “an exceptional woman and extremely talented fashion designer whose elegance and humanity have led her to transform the fashion world.”

“She’s so beautiful, she’s intimidating to me,” said the ambassador. He said she has been very successful in uniting the energy of New York with the romance of Paris and described the award as “one of France’s most prestigious distinctions.” Established in 1957, the award recognizes eminent artists and writers, as well as people who have contributed significantly to furthering the arts in France and throughout the world. American recipients of the Chevalier of the French Order of Arts and Letters have included Meryl Streep, Uma Thurman, Paul Auster, Ornette Coleman, Agnes Gund, Marilyn Horne, Jim Jarmusch, Richard Meier, Robert Paxton and Robert Redford.

Having grown up in Grenoble, France, Malandrino graduated from Esmod and worked at such Paris houses as Dorothée Bis, Louis Féraud and Emanuel Ungaro. She then directed the French label Et Vous. In 1997, she came to New York and worked at Diane von Furstenberg before introducing her own signature collection in 1998, winning the windows of such stores as Bergdorf Goodman and Neiman Marcus. A high point of her career was her Flag collection which she sold in 2011, which was featured in Bergdorf’s windows. Her clothes have been worn by such celebrities as Mary J. Blige, Demi Moore, Heidi Klum, Nicole Kidman and Beyoncé. Malandrino has also become involved in several humanitarian ventures, such as promoting gender equality around the globe and fighting against human trafficking. “When elegance meets charity, it’s a magical combination,” Delattre said. “Catherine is one of the most photographed French women in New York, right after the Statue of Liberty,” he said, describing her as a “wonderful ambassador to French culture in the U.S.” and a bridge between Paris and New York.

Malandrino is writing a book about American and French style which she expects to have published by the end of the year.

“It’s really fantastic,” said Malandrino, in a chic black jumpsuit and gold jacket. “It’s an honor tonight and a joy to see all my friends together, who have been supporting me for more than 17 years. I can’t thank you enough for your friendship and support. I’m very honored to receive this medal to make France shine to the world. As French people we have a ‘je ne sais quoi’ to share with the world.”