The five-story unit on Via Montenapoleone spans 16,200 square feet.

By Luisa Zargani and Alessandra Turra on February 22, 2014
View Slideshow 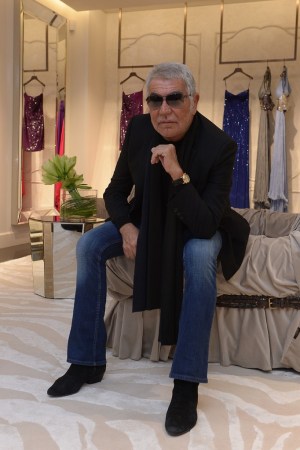 MILAN — Roberto Cavalli was up early on Saturday morning, giving tours of his new Milanese flagship store, clutching a new bold accessory — a crutch covered with black and white Swarovski crystals in a zebra pattern, following an operation on his hip two weeks ago.

Cavalli staged his fall runway show in the afternoon and was to cap off the day with a cocktail party to fete his biggest boutique in the world.

Located on Via Montenapoleone, also overlooking the historical Via Bagutta, the boutique spans 16,200 square feet and is meant to represent the brand’s new Global Fashion Store.

“The spaces available on Via Montenapoleone are getting fewer and fewer and prices are incredible,” Cavalli lamented. “But it’s so important to be here because Via Montenapoleone keeps growing, while in many other international cities several shopping streets are slowing down. Take Sloan Street in London, there is a lack of customers there.”

The boutique, which unfolds over five floors connected by a grand staircase with mother of pearl steps, as well as by a digital video wall visible on each level, features a single window on the street.

“Having ten shopping windows on the street is just a sign of opulence,” said Cavalli.

Along with showcasing the brand’s women’s, men’s and children’s ready-to-wear and accessories lines, on the second level the boutique hosts an atelier for made-to-measure designs, while the basement is dedicated to the home line and boasts an external garden.

Cavalli created an exclusive women’s collection of apparel and accessories, named ‘Montenapoleone’ Limited Edition and based on the house’s iconic leopard prints, available only at the location. He revealed that he  is developing another line.

“I’m creating a more casual and fun line of T-shirts and sweaters for the Roberto Cavalli label,” said the designer. “Then, I would like to add a jeans range, but I’m still waiting for another supernatural idea, I’m waiting for divine inspiration,” he quipped.

Unique items at the store include precious and models of the Hera bag in laminated gold leather and powder pink mink, or laminated silver leather and jewel applications. Other designs include a silver python leather look with a pavè of Swarovski crystals on the shoulder strap.