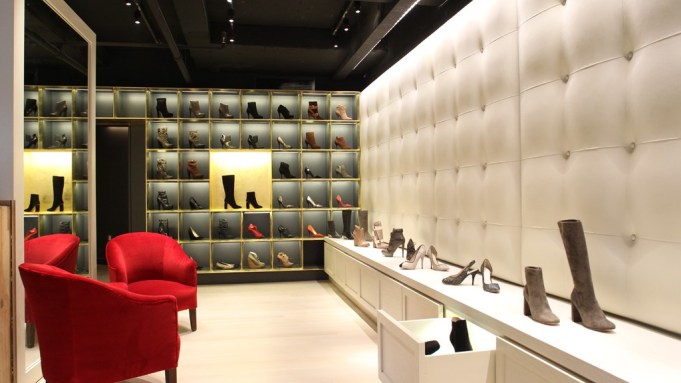 “It’s a beautiful day for me,” said Cazabat, who lists Marc Jacobs, Ralph Lauren and Jimmy Choo as his new retail neighbors. “I used to live in the West Village just two blocks away, and it’s one of the best streets for fashion retail. I think it’s perfect for us. People love to walk around here, and the foot traffic is very good — you can’t miss the store.”

The store will carry a full range of the brand’s fall offerings, which include women’s boots priced from $245 to $425, and a selection of exotic skinned handbags comprised of python and crocodile skins and men’s footwear that start at $1,250 and $550, respectively. Inspired by “distant lands” and “harsh winter climates,” the current collection focuses on texture and combines materials and techniques such as ruching, quilting, ruffles, chain and beaded detailing, horns and exotic skins, according to the designer.

The store’s colors are blue, red and gold — mirroring Cazabat’s home. A vibrant “Napolean” blue wall welcomes customers into the shop, as well as a scarlet “rouge taureau” ottoman, and there’s also a limestone fireplace with product displayed in walnut washed cabinets that resemble a chest of drawers.

“All seating areas [in the store] are red — just like in my house. When I launched my brand, I wanted to have a special color. I didn’t want boxes to be white or black,” he said of the boxes his shoes come in, which all have blue tops, red bottoms and a gold logo. “I want the customer to feel like they are in the ‘Jean Mi’ [the designer’s nickname] universe — like they are coming into my house.”

Cazabat — whose career in the category began 25 years ago as creative director and buyer for Charles Jourdan — said that is the first step in a global expansion plan for the 12-year-old company. The goal is to open additional retail locations in New York, as well as Los Angeles, Chicago and in major cities in Europe. The brand opened a shop-in-shop in Hangzhou, China, in August as a “test,” according to the designer, who was pleased with the results and hopes to open freestanding stores in Asia as well.

Digital is another major initiative for the brand, which will unveil a revamped Web site next week at jeanmichelcazabat.com, equipped with social media capabilities that include live feeds of the brand’s Facebook and Twitter accounts.

“This is the first step in making the brand present online,” said Jean-Michel Cazabat’s director of public relations, Liz Auerbach, who also spearheads the company’s social media initiatives. A new “JMC World” tab on the site will serve as a home for the designer to blog about his inspirations, post editorial credits and celebrities wearing the brand.