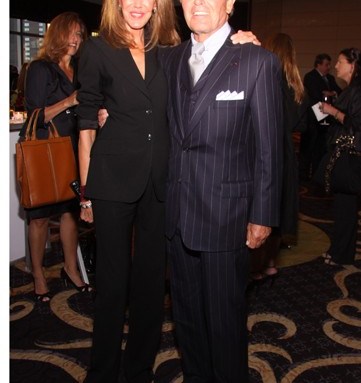 “We had one hell of a ride,” Tansky, who retires Oct. 6 as chairman and chief executive officer of the Neiman Marcus Group, said during a goodbye party at the Mandarin Oriental hotel here. “We moved into areas of luxury and quality that were just waiting to happen.”

The event on Wednesday night was the latest of several planned for Tansky in the U.S. and in Europe.

“It’s rushing up,” Tansky said of his departure, addressing about 300 vendors, designers, retailers, friends and family. “I will remember all of you fondly.”

It was a gathering of the old guard and the new guard. Some of the industry’s most accomplished players, including Marvin Traub, Ira Neimark, Philip Miller, Barry Schwartz and Howard Socol, mixed with those mentored by Tansky. Among them were Karen Katz, his successor; Jim Gold, president of Neiman Marcus Group specialty retail, and Brendan Hoffman, ceo of Lord & Taylor.

“We’re only halfway through the celebrations,” Katz said. “I promise you, my day job is much, much easier than this. His almost 50 years in business is hard to believe.”

Gold kept it light, recalling the early advice Tansky gave him on what to say to a designer after a fashion show that bombs. “He told me to look them straight in the eye, muster all the sincerity you can and say, ‘I’m speechless’ or ‘I just don’t know how you do it’ or, one of my very favorites, ‘You’ve done it again.’” Turning sentimental, Gold said: “Burt has made us better business people, but more importantly, he’s made us better people.”

Neimark, the former Bergdorf Goodman ceo, said, “Burt, if you want to learn to play golf, call me. If you want to write a book, call me. By the way, my book is on sale on the seventh floor of Bergdorf’s.”

David Simon, chairman of Simon Property Group, said, “When he commits, you can bank on it. He also happens to be the best personal shopper. He’s remade my wardrobe.”

Tansky seemed pensive, balancing his characteristic levity with a display of warmth. He encouraged everyone to visit Bergdorf Goodman, nearby on Fifth Avenue.

“It would be inappropriate if you didn’t buy anything,” he said, adding that it was “a privilege to work with you, to build businesses and to take your markdown money.” As for the future, Tansky said: “[My wife] Rita and I hopefully will be spending quality time together. She’ll find I am easy to get along with, but I have agreed to give her one hour a day of free time.”