The luxury brand is back with a boutique whose minimal and modernist decor echoes the streamlined designs of Phoebe Philo. 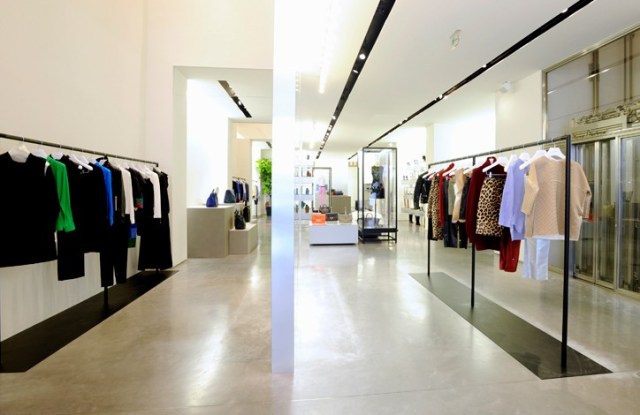 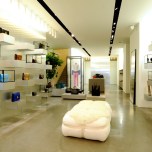 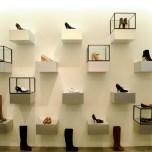 PARIS — Celine is back with a boutique on the Left Bank, whose minimal and modernist decor echoes the streamlined designs of Phoebe Philo.

The 2,500-square-foot unit at 16 Rue de Grenelle, which opened without fanfare earlier this week, retains the polished concrete floors utilized by its two previous retail occupants: Hermès, which used it on a temporary basis, and Miu Miu, which first arrived at the site in 2000.

Philo sliced into the white gallery-like space with dividing walls in brushed steel, and added a series of low, hulking plinths — in cement or steel gray — for displaying accessories. Three glass cases lined up in the center of the rectangular space each display one outfit on a Stockman.

A series of individual metal display shelves for shoes and handbags bring to mind Donald Judd’s wall sculptures. For seating, there’s a large ottoman resembling an ultrathick futon strapped with sheepskins.
Celine closed its unit on the Rue de Rennes last year as it weeded out about 30 percent of its directly operated stores and made a clean sweep of its product offer.

The fast-growing firm, owned by LVMH Moët Hennessy Louis Vuitton, plans to inaugurate twin flagships: one with 90 feet of frontage at 870 Madison Avenue in New York, the other a three-story unit at 24 Rue François 1er in Paris that is more than double the size of its current incarnation. Both are to showcase a new concept by architect Peter Marino.

A Celine spokeswoman noted that the Manhattan unit is slated to open before the end of the year, while the François 1er location’s opening has been pushed to early 2012. Showroom space in the latter unit — to be given over to retail floor space — has now been shifted to two floors above the new Rue de Grenelle store.

The company declined to give first-year sales projections for the new boutique. In Paris, Celine also operates a location on Avenue Victor Hugo near the Arc de Triomphe.