For the past three years, the Neapolitan bespoke tailor had sold its $5,500-plus custom suits by appointment out of a showroom on Fifth Avenue. 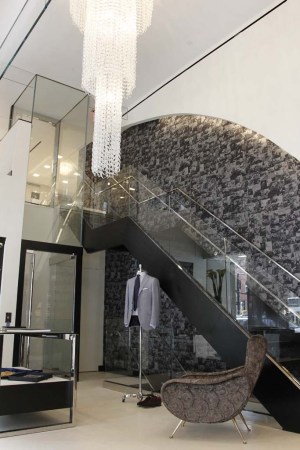 It took more than 80 years, but Cesare Attolini finally took the plunge into the New York City retail scene.

This story first appeared in the March 15, 2012 issue of WWD. Subscribe Today.

For the past three years, the Neapolitan bespoke tailor had sold its $5,500-plus custom suits by appointment out of a showroom on Fifth Avenue, but it has opened a 2,400-square-foot boutique at 798 Madison Avenue between 67th and 68th Streets, next door to the new John Lobb shop.

The store had a soft opening last week and a grand opening event, sponsored by Aston Martin, is slated for April 3.

“We opened on Friday and the reaction has been overwhelmingly positive,” said Enrico Libani, chief executive officer for North America. “It was the nicest surprise.”

The store showcases ready-to-wear, primarily shirts, on the lower level, along with bolts of fabrics to evoke the brand’s bespoke heritage, and some sportswear and outerwear pieces. A staircase leads customers upstairs, past a custom-designed printed wallpaper that shows images of the firm’s Italian tailoring heritage, to the atelier.

The bespoke room is designed to “look like a Madison Avenue apartment,” he said, and there is a door that can be closed for privacy.

Cesare Attolini, which was founded in the Thirties by Vincenzo Attolini and is still family owned and operated, is known for modernizing the traditional British suit with soft shoulders and high armholes. Boat-shaped chest pockets, a three-button roll to two, and a slim fit are also hallmarks of the brand. “It’s designed to fit like a second skin,” Libani said.

In the U.S., he said the brand expects to rely on “one-on-one marketing” to build its client list. “Once the consumer experiences this product, it’s addictive,” said Massimiliano Attolini, grandson of the founder.

This is only the company’s second store, following a unit in Naples. Libani said there are no plans to add more stores in the U.S. “We can only make 40 garments a day, so at most we can make seven for the U.S. market. We’re looking for a few good men.”

The label is wholesaled at 120 stores around the world and is sold at a select number of independent stores in the U.S. including Cuffs in Cleveland, James in Washington, D.C., Hadleigh’s in Dallas, Decorato in New York and Axel’s in Vail, Colo. “Our product does best in small boutiques,” said Massimiliano’s brother, Giuseppe Attolini.

Down the road, however, Libani said the company hopes to open stores in London, Shanghai and Dubai — “one store in each country in a city that counts,” he said, noting that the plan is to only have four to five in total.