The votes were tallied and the CFDA Awards went to Ashley and Mary-Kate Olsen for The Row for women's wear, Tom Ford for men's wear and Tabitha Simmons for accessories.

By Erik Maza and Jessica Iredale and Taylor Harris on June 1, 2015
View Slideshow 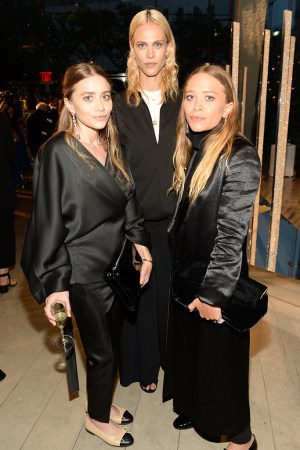 On Monday night in New York, the model Gigi Hadid arrived to the CFDA Awards at Alice Tully Hall looking like a living Academy Award statuette in a gold jumpsuit by Michael Kors. And why not? This was as good a place as any to wear it.

“It’s the Oscars of fashion,” the designer quipped. Indeed they are. On fashion’s biggest night, Kors was among the nominees for womenswear designers of the year along with Marc Jacobs, Joseph Altuzarra, Jack McCollough and Lazaro Hernandez for Proenza Schouler and Mary-Kate Olsen and Ashley Olsen for The Row.

It was the twin sisters who eventually won that top prize while Tom Ford picked up the award for menswear and Tabitha Simmons won for accessories designer of the year. As for the Swarovski Award winners for emerging talent, trophies went to Rosie Assoulin for womenswear, Shayne Oliver for Hood by Air for menswear and Rachel Mansur and Floriana Gavriel of Mansur Gavriel for accessories. The fashion icon award went to Pharrell, the first man to win the honor since Johnny Depp in 2012, and it was handed to him by none other than Kanye West.

Although talk of Caitlyn Jenner dominated the day’s news cycle, during cocktail hour it was another woman, a fashion iconoclast, who was getting singled out for praise: lifetime achievement award winner Betsey Johnson.

“You can’t not love this woman,” said Juliette Lewis.

The designer, in a trademark jumpsuit, was spotted near the bar trading compliments with “Empire” star Taraji P. Henson.

“Bold and different and cutting edge. I love her sense of humor,” Henson told WWD. “I’ve been wearing her for years, even when I couldn’t afford the clothes.”

Inevitably, talk of Jenner did circulate around the venue before the awards, but the only person who might have credibly commented on the Vanity Fair cover, Kim Kardashian, made her grand entrance around 8:30 p.m., as most guests had already taken their seats for the ceremony. You would think she was trying to avoid the cameras.

“I’m so glad it’s out – the suspense!” she was finally overheard saying as she headed inside to present the media award to Instagram.