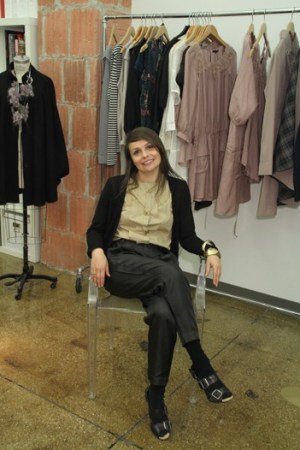 NEW YORK — In recent years, the American fashion industry has cultivated emerging talent like no other fashion capital. The CFDA Fashion Incubator, celebrated on Wednesday, is further proof of it.

This story first appeared in the May 20, 2010 issue of WWD. Subscribe Today.

The initiative consists of a full floor at 209 West 38th Street, where 12 up-and-coming designers have taken two-year leases for studios at rents from $1,000 to $2,000 — far below the market rate for space so centrally located in the Garment District. It also provides mentorship from industry professionals.

The incubator was launched by the Council of Fashion Designers of America with Mayor Michael Bloomberg in partnership with Newmark Holdings and the New York City Economic Development Corp.

“It’s a great example of what the CFDA, the city and the landlords can do when we come together,” Diane von Furstenberg said during a walk-through of the space. “I hope it’s the beginning of a movement.”

Seth Pinsky, president of the NYCEDC, which is giving the CFDA $200,000 toward the Fashion Incubator, echoed the sentiments. “It’s very important for the city to nurture its talent,” Pinsky said. “Our hope is that we will be able to announce a whole set of initiatives that build upon what we have here.”

If it all felt a little bit like an upscale mall, then so be it. “All the designers are really talented, they are all together here, and it’s a one-stop shop,” von Furstenberg said. “We are working with the city on all kinds of ideas.”

The 12 designer firms are Alice Ritter; Waris Ahluwalia from House of Waris; Prabal Gurung; Dao-Yi Chow and Maxwell Osborne of Public School; Bibhu Mohapatra; Grant Krajecki of Grey Ant; Rachel Dooley of Gemma Redux; Joel Diaz from Jolibe; Sang A Im-Propp of Sang A; Justin Giunta from Subversive Jewelry; Yuvi Alpert and Danna Kobo from Ruby Kobo, and Tom Scott. Each designer was on hand on Wednesday to show off their brand-new spaces, and many had put much effort into giving the spaces a personal touch with decorative elements that underline their fashion philosophies. Gurung, for instance, divided his space into three smaller rooms dedicated to design, operations and a sales showroom.

For many of the designers, this is the first time they are working outside of their apartments. “I really feel like I am grown-up now,” Scott said. “I guess I am a bit of a later bloomer.”