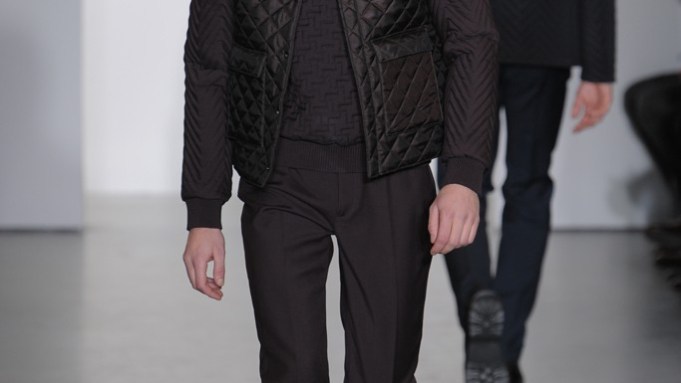 Could New York men’s wear stand on its own during a separate fashion week?

That’s the question being bandied about in high-level talks hosted by the Council of Fashion Designers of America. The discussions follow long-running complaints by designers, retailers and editors that men’s shows in New York get short shrift by attaching themselves to the women’s shows in February and September. With the buzzed-about launch last June of London Collections: Men, New York is now the only major fashion capital without a stand-alone showcase for men’s wear designers.

“Over the years, a number of industry people have talked to the CFDA about the value of a dedicated men’s week. In recent months, some key people with a deep and sincere interest in that idea have come together as a group to explore that possibility,” confirmed Steven Kolb, chief executive officer of the CFDA, when asked about the talks. “We are looking at the potential of a men’s week and how that might fit into the global men’s calendar.”

The CFDA has hosted two meetings on the subject at its headquarters in the past two months, with interested parties that have included Tom Florio, ceo of trade show producer Advanstar Fashion Group; men’s editors, including Jim Moore, creative director of GQ, and KCD, the fashion show production and publicity agency.

Kolb emphasized that the meetings remain in the planning stages, but the possibility exists of moving forward with a men’s fashion week either this summer or in early 2014. “It’s the right people having the right conversations. There’s a lot of discussion and evaluation and research. We’re looking at the business model, what the dates could be and whether it will attract the right numbers and level of designers and audience,” said Kolb. “There seems to be a real desire to map it out.”

This season, Rag & Bone opted to get an early jump on the official New York calendar with its men’s collection, staging a runway show on Jan. 30. Marcus Wainwright, cofounder of the label with David Neville, pointed out that the New York shows fall way behind the retail buying calendar. “If we show during women’s fashion week, then it misses the men’s market. For the fall season, the timing is OK, but for spring it’s a joke in September,” he noted.

In the past, he said, the duo had showed men’s and women’s on the runway together, but in an attempt to let the men’s line “live on its own,” they opted to separate it this season. “It’s a hugely important part of our business and it’s where we started,” Wainwright said.

Ralph Lauren regularly hosts informal seasonal presentations in his New York headquarters before the kickoff of the runway shows. “I would love to show on the runway again. I’m thinking about it. I can’t say I’m committed to it, but it’s something that we thought about,” said Lauren last week.

Ralph Lauren last staged an official men’s show in New York in 2007, but the designer is not convinced Manhattan is the way to go down the road. “We’re a very international company now and our goal is to have more people around the world see the brand,” he explained.

Without big men’s names like Ralph Lauren — which is rumored to be considering showing in Paris this summer — or Calvin Klein and John Varvatos, which both usually show in Milan, it could be difficult to establish a center of gravity in New York. However, Kolb and other observers were optimistic that enough design talent exists in New York to create momentum for a men’s week. This season, there are more than 40 men’s collections being shown in New York in either men’s-only or dual-gender shows and presentations.

“Years ago there were tents in Bryant Park for a separate men’s fashion week. It wasn’t as supersized as the women’s, but it was in Bryant Park and it was an official four days for men’s wear,” recalled GQ’s Moore. “It was a very robust time for men’s wear. And I think men’s wear is even stronger now, so I don’t see any reason it couldn’t work again.”

The CFDA previously organized a men’s fashion week in New York in 1995 under the auspices of 7th on Sixth, but the shows were canceled in 2000 due to waning interest from designers and attendees. During that time, designers such as Donna Karan, Tommy Hilfiger and John Bartlett often elected to show coed during women’s fashion week or moved their shows to Europe.

Designer Michael Bastian pointed out that American men’s designers are sometimes not served well by moving their shows overseas. “I think American men’s wear is totally different from what you see in Milan and Paris. Sometimes you see an American designer over there and it feels a bit out of context. It looks out of place,” he noted. “I think now we are getting critical mass in New York for men’s wear so that we could gang together and stand for something.”

Not everyone believes a separate men’s week is advisable. “It’s a silly thing to do,” said Doug Jakubowski, chief merchandising officer of Perry Ellis International Inc. “It’s exciting and wonderful to be around fashion week and having the full audience available to us is so compelling. To create another week and require editors and retailers from around the world to come to New York twice is unreasonable.”

Daniel Silver, who codesigns the Perry Ellis by Duckie Brown collection, was wary of attaching a men’s fashion week to the Advanstar trade shows, as some sources said was being considered. “If there was a men’s fashion week that was the same as those in Milan and Paris, that would be grand, but what they’re talking about for New York is to have it attached to a trade show, and that’s a very different kettle of fish. I’m curious about it, but I can’t say we’re eager to jump on board. Duckie Brown shows fashion, not clothing,” he explained.

Advanstar, which operates the MAGIC marketplace in Las Vegas and the Project men’s trade shows in Las Vegas and New York, could be a key supporter of a men’s fashion week in New York. Linking the two organizations could be helpful in drawing a large number of men’s buyers and press to New York at the same time. In Paris, for instance, the Tranoï and Capsule trade shows are timed to coincide with the men’s shows there.

“There is so much great talent being supported in women’s, which is wonderful, but there is very little voice for men’s wear unless you’re one of the megabrands,” said Advanstar’s Florio. “Early on, when I arrived [at Advanstar], people would say we don’t have something like the Vogue/CFDA Fashion Fund supporting men’s design. We have all this incredible talent in men’s wear that needs to be supported and we’re trying to help.”

Florio has deep ties to the designer world and runway shows, as he is a former publisher of both Vogue and GQ, and was previously a senior adviser at IMG Worldwide, the organizers of Mercedes-Benz Fashion Week in New York.

Any potential partnership between the CFDA and Advanstar could solidify the latter’s positioning as a central commercial resource for the men’s apparel industry. In an overt courtship of the designer market, Advanstar this month is launching a new trade platform in Las Vegas called The Tents at Project, where designers like Bastian, Billy Reid and Todd Snyder will participate.

“There are many possible initiatives and many people at the table asking how it could be done and what the right timing is,” said Florio. “We are ready to lend whatever resources we can, including relationships. We are interested in marketing American men’s fashion and retail on the world stage. We are the largest men’s fashion organization in the country — 50,000 buyers do business at our properties. Elevating men’s fashion is good business for all of us.”

The renewed interest in a New York men’s week comes as London has basked in the spotlight of its men’s shows. London Collections: Men, spearheaded by the British Fashion Council, took place for the second time in January, with shows that included Tom Ford, Alexander McQueen, Christopher Kane, Hackett London, Topman, Margaret Howell and Oliver Spencer.

None less than British Prime Minister David Cameron hosted a reception for men’s designers at 10 Downing Street to kick off the collections on Jan. 7, giving a speech about the importance of fashion to the British economy.