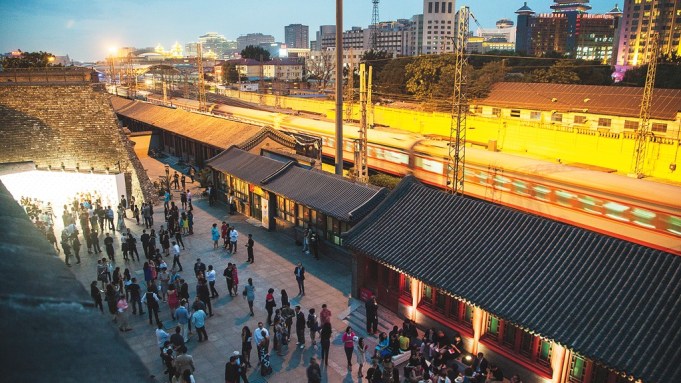 BEIJING — A celebration of contemporary American fashion cascaded across Beijing’s Ming Dynasty City Wall on Friday evening, bringing together a mix of three prominent but young U.S. brands in a unique show in the Chinese capital.

The runway show, produced by the Council of Fashion Designers of America/Vogue Fashion Fund Initiative and underwritten by Hong Kong-born fashion industry mogul Silas Chou, brought together the fall collections of three Fashion Fund alumni labels — Proenza Schouler, Rag & Bone and Marchesa — on one runway with a cast of exclusively Chinese models over a dramatic, only-in-Beijing backdrop. The unusual runway show displayed the labels’ diverse looks to several hundred of China’s tastemakers, industry insiders and journalists.

This was the biggest event yet in CFDA/Vogue’s ongoing Americans in China initiative, a program that began two years ago with small exchanges between Chinese and American designers.

The China program, an outgrowth that developed on the heels of the success of the CFDA/Vogue Fashion Fund’s Americans in Paris exchange, is intended to foster creative collaboration between designers and brands in China and the U.S., and potentially spark consumer interest in the massive Chinese market.

CFDA chief executive officer Steven Kolb said the China exchange was also crafted to help emerging American designers and brands develop a deeper understanding of the world’s fastest-growing luxury and fashion market. Even the biggest brands can get China wrong, so younger upstarts can have a tough time navigating what can be difficult waters here.

In an interview, Kolb noted how China is the buzzword across the fashion industry, but there is a widespread lack of on-the-ground expertise about how to excel in the business here.

“Everyone’s always talking ‘China, China, China,’ but maybe people are only understanding China how they want to, or they don’t really get how it works here,” he said before the show.

The dramatic Beijing show, intended to help bridge that knowledge gap, emerged from a casual conversation last year among Proenza Schouler designers Jack McCollough and Lazaro Hernandez over lunch with Vogue editor in chief Anna Wintour. “We were talking about our strategy on how to enter this burgeoning market, what we could do to make a presence in China,” Hernandez said, recalling the show’s genesis.

Wintour ran with the idea, turning it fairly quickly into reality. The planning drew in two more CFDA/Vogue award winning labels. Silas Chou jumped in with the underwriting (for a cost CFDA officials didn’t disclose but called “not cheap”), and the designers set out for a week of exploring and prepping for the event in Beijing. Chou told the designers that they’re living the American dream, and now he wants them to have a taste of the “Chinese dream.”

U.S. Ambassador to China Gary Locke feted the designers at a cocktail reception at his home in Beijing on Thursday, while Vogue China editor in chief Angelica Cheung celebrated them with a private dinner after.

The three brands were chosen to show off a creative range of young American fashion. They each specialize in different looks and potential market segments, so their joint show would come off as a collaborative effort rather than competitive.

Kolb explained that Marchesa and Rag & Bone were invited to broaden the scope of the show, featuring labels that don’t necessarily compete with each other but give a wide glimpse of emerging U.S. fashion. But in fact, these brands might be called post-emergent, still young and fresh but also grounded enough that all three are sold in Lane Crawford, the Hong Kong-based store chain that has become a go-to for fashion-savvy Chinese consumers.

“The brands that are here are at a different level than the brands that go to Paris. Really they’re more established,” said Kolb. “Marchesa, Proenza Schouler, Rag & Bone — they’re established, you really can’t call them emerging anymore. We really wanted to introduce them to China, because let’s be honest, they’re probably not that known here.”

As for the designers, gathering in interviews the day of the show, their impressions of China and hopes for a bigger consumer audience here ran the gamut, from enthusiasm to a bit of skepticism about what lies ahead. A common theme on what surprised them all about Beijing: the difficulty of communicating in English, something that seems far easier in most of the rest of the world’s capitals.

Hernandez and McCollough, co-originators of the China show concept, said they were excited for their work to be exhibited in China and the possibilities it brings. The pair asked almost as many questions about China as they answered in an interview.

Their products are selling well in Lane Crawford and Joyce, the Hong Kong-designer warehouse with a shop in Beijing, and the design duo is exuberant about the possibility of opening a freestanding store in China, but intends to proceed with caution.

“Oh, absolutely. I can definitely see that,” said Hernandez. “We’re exploring and talking. To open something in China, you need a local partner, so we’re sort of testing the waters, meeting different people and seeing what’s right for us.”

Marchesa textile designer Keren Craig said she has long been inspired and influenced by Chinese fabrics, and was drawing in even more on her first trip to China. She’s also intrigued by China’s market potential and the chance to explore it on her visit and at the show.

“We were just so honored and excited to be invited, and to be with such peers,” she said. “That’s the amazing thing about the CFDA, is it’s really like a family and you get to know the other designers. It’s a home away from home.”

For Rag & Bones’ managing partners David Neville and Marcus Wainwright, Beijing also represented something of an exploratory mission. The two have some experience in China and said they want to move toward China slowly, building a base in the right way without taking undue risks. While elite Chinese consumers are looking for smaller brands and unique design, the mass market here remains beholden to large luxury labels, a fact Neville and Wainwright noted.

“We’ve been working with stores like Lane Crawford and I.T for a long time. We certainly haven’t been on a major push. It’s something we’ll have to digest after this trip,” said Neville. “We’ve been focused on America for so long, but it’s great to come here and see the opportunity. Everything’s about the right timing, finding the right partners.”

Said Wainwright: “It’s overwhelming if you just try to wade in, but we’ve learned enough lessons in other markets trying to do something like that.”