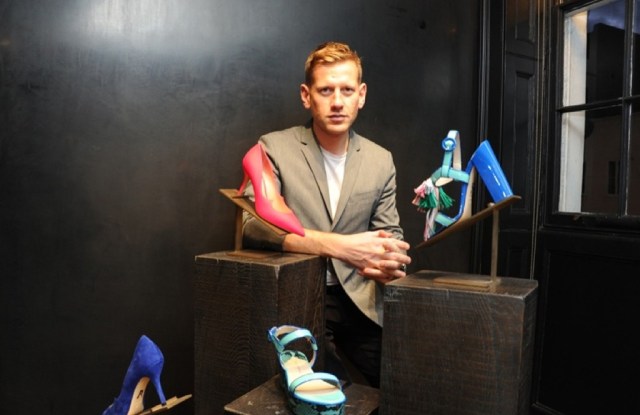 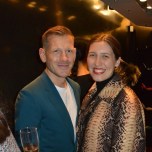 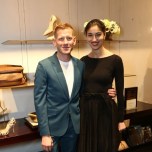 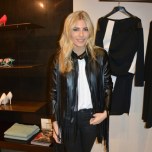 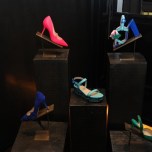 Later that evening, the footwear designer threw a party at the store, together with publisher and street-style favorite Caroline Issa, to fete the new space. Issa said after seeing Andrew’s first presentation in London, she’d pronounced the collection “mind-boggling good.”

“He’s future-proof, he’s going to be here for the long term,” said Issa, who wears Andrew’s shoes in the look book for her upcoming collection with Nordstrom.

Andrew — who worked at Karan’s label for more than a decade and who he still consults for — said during a walkthrough of the space Tuesday that he sees opening the pop-up as “coming home in a way.”

“The fact that…[Karan] invited me to take over this space for a couple of months was such an honor, and the fact that it’s in London, and I was born and trained here, it does feel like coming home,” said Andrew, who’s based in New York.

Andrew has clearly stamped his handwriting on the store — a sketch of his Zenadia pump takes up one of the windows, while his colorful, feminine designs act as pops of color among Karan’s spring looks. Many of Andrew’s designs are exclusive to the space, such as a hot pink, matte patent version of the Zenadia pump — which is finished with a matte rather than shiny lacquer texture — along with a rose gold and dusty pink version of his Tigrado suede pump. There are also designs such as his Athena gladiator sandal, in which the straps run up the calf, along with the Zenadia pump in a rainbow of layered suede colors and his Rhea kitten heel sling-back in fuchsia floral brocade. “It’s really given me a taste [for opening a store],” said Andrew of the experience. “I’m really keen to open my own retail stores at this point.”

After his CFDA win in November, this year is shaping up to be a busy one for Andrew. He will showcase his fall collection in New York with a presentation during New York Fashion Week “that’s a little bit more outside the box,” Andrew said, which will have “a show element.” The designer will also create the shoes for a number of ready-to-wear designers’ fall collections, among them Emilia Wickstead in London, who said at the party that she loved the “modernity” of Andrew’s designs.

As to future collections, the designer said he’s planning to launch a men’s line “within the next 12 months.”

“I see that there’s a real niche in the market for men’s shoes that are neither too classic nor too fashion-forward,” mused Andrew, noting that he’s also planning to launch accessories “within the next three to five years.” He’s also looking to new markets — the designer is just back from a trip to China, where his collections will launch for fall at Lane Crawford in Shanghai and Beijing, along with Isetan in Tokyo, with the line also scheduled to launch at retailers in Russia.

As for reports that the appetite for luxury is slowing in emerging markets such as China and Russia, Andrew said that unlike major luxury labels that may have seen rapid growth in those markets begin to slow, his business in those countries “is totally new for me, so I feel like there’s potential to grow the business there,” he said.

Exploring those far-flung locales has fired up Andrew’s imagination. “I was so inspired by my trip to China — I feel like the next collection could certainly have a feeling of Asia,” he said.