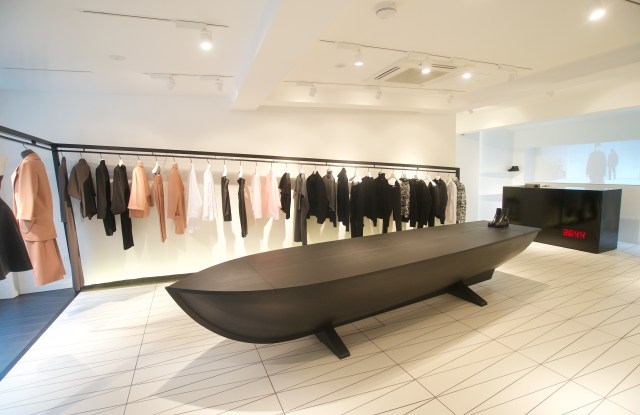 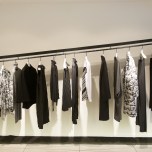 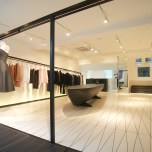 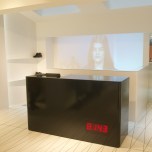 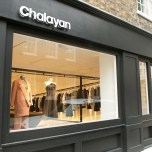 LONDON — Hussein Chalayan has chosen Mayfair’s Bourdon Street, a genteel street that’s near Mount Street — home to labels such as Céline, Marc Jacobs and Christopher Kane — as the setting for his label’s first store.

The designer — who marks the 21st anniversary of his business this year — has worked with architect and designer Zoe Smith of London’s ZCD Architects to create the 700-square-foot space, which stands out among the 19th-century buildings on the street with its sleek matte, black exterior. “This is quite an established area, but this street felt a little bit more alternative to me, so it felt compelling,” said Chalayan over a sparkling water at Bourdon House, close to the store. Adding that while he had been considering a store “for a long time,” Chalayan said that as an independent designer “it’s hard to do these things overnight, so it took a while.”

The store itself is done in stark black and white, with Chalayan and Smith working to create what the designer called “a space within a space.” To wit: the clothes are all displayed on an angular rail that runs along the walls and across the front of the store, to create an area that’s distinct from the entrance.

There is also a sense of texture, with a gravel and stone detail that borders the white tiled floors. At the center of the spotlit store is a sleek black boatlike object in matte blackened wood, which acts both as a display plinth and as storage, and can turn into a dining table when the designer hosts events in the store. There are also signals to Chalayan’s past work — the triangular black and white tiles on the walls reference a backgammon board, while a digital clock that counts the time nonstop is inset into the shiny black lacquered wood cash register. Both are motifs that Chalayan has worked with in a number of his past collections.

“The layout is so you can actually appreciate each piece, so there is not too much product,” Chalayan said. “I want it to feel relaxed and welcoming and not too intimidating,” he added. “We want…people to feel they can spend time there.”

Chalayan plans to host events, such as dinners and exhibitions, in the space, the first of which will be an opening party Sept. 21 during London Fashion Week.

Having a store, Chalayan believes, will allow him to get to know his customer better. “I think the future for designers is really to know their customer….I think one of the reasons to create the platform is for that,” he said. As the designer sees it, his customers are drawn both to “buying things that other people don’t have, combined with the extreme opposite — individuals who have seen something on somebody, and they want to buy it. It’s either that or the other for us.”

That said, the celebrities the designer has dressed — among them Cate Blanchett, Natalie Dormer and Marion Cotillard — are also drawing customers to the label. “It allows people to be inspired, really. I think it creates alternative profiles as to who could wear the clothes and what kind of person could wear the clothes,” said Chalayan. “It kind of exemplifies and creates archetypes of who our woman could be, and that’s what’s really good about it. I don’t mean just in terms of how our woman could look, but also in their whole being,” he said. “It can maybe cause a spark in another person who wouldn’t have worn our clothes, to actually try it.”

Another boon to having a store, Chalayan noted, is that customers will be able to examine the detailed work and construction that goes into his designs. “They’ll look at things in their own time, and there will be someone there to explain the clothes to them and the processes,” he said. “I’m hoping it will also be a platform which can improve people’s understanding of our work.”

Added to the Chalayan’s store’s arrival, a new Gagosian Gallery is set to open on the adjacent Grosvenor Hill in October.

After opening in London, Chalayan said that he’s considering some form of London showcase in the future, while continuing to show his women’s collections in Paris. But ahead of that, the designer — who since starting his label in 1994 has made a name with his arresting runway shows, which often bring to mind performance art — will in October premiere “Gravity Fatigue,” a contemporary dance piece he has directed and designed, working together with choreographer Damien Jalet. The production, which the label says will explore themes of “identity and displacement” will debut at London’s Sadler’s Wells theater Oct. 28.