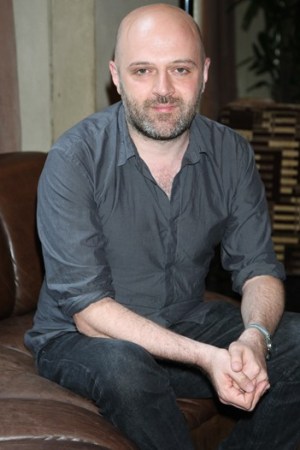 Hussein Chalayan is the first to admit he’s a “designer’s designer.” Just don’t call him avant-garde. “I hate that term,” says the London-based Chalayan, over a macchiato at Manhattan’s Soho Grand Hotel. “It’s a real hindrance because I don’t think it expresses what we’re about. It makes it sound like we can’t appeal to people or something, and it’s absolutely rubbish.”

This story first appeared in the July 30, 2009 issue of WWD. Subscribe Today.

The reason for Chalayan’s midsummer trip to New York is a case in point: His collaboration with American denim label J Brand on three styles of jeans, launched exclusively at Barneys New York. If the idea of a designer known for his experimental runway shows, replete with mechanical dresses and LED effects, designing jeans — for a fairly accessible line at that — registers to some as selling out, to others, it’s the ultimate example of fashion’s current fixation: Getting down to business.

Now 14 years into his career, Chalayan, 38, is pursuing a balance between creativity and commerce. “It’s like a ball and chain,” he says. “I don’t feel they’re separate.” That’s a revelation he fully embraced in February of last year, when he accepted the position as creative director of Puma, as well as its bid for a majority stake in his company, which in turn brought in the brass from PPR, Puma’s majority investor. Such a corporate connection was something Chalayan wrestled with. “I had been made other offers before that I didn’t think were good enough,” he says. “But this was a very good exchange, a strategic partnership. I felt if I didn’t do this, my brand wouldn’t move on enough.” Chalayan considers himself lucky to have gotten in with PPR before the financial crisis hit. And in addition to the obvious cash incentive and stability that come with Puma/PPR, so does the opportunity to integrate technology into design at Puma and the fact that it doesn’t conflict with his own collection. “It’s not like doing Givenchy or something,” says Chalayan (perhaps a swipe at two other well-known British designers, John Galliano and Alexander McQueen). Incidentally, another free-gift-with-purchase is one of fashion’s biggest power players: François-Henri Pinault, PPR chairman and chief executive officer, whom Chalayan has met and admires. “[Pinault] obviously knows my history; he’s obviously interested in creative designers,” says Chalayan. “It’s a very rare attribute [in a businessman]. He could have not taken any interest in designers. He could have only taken an interest in strategy.” (Chalayan is also partnering with Comme des Garçons on a fragrance.)

While Chalayan considers his deal with PPR a positive and necessary step, he takes issue with other big business partnerships — in particular, the model-turned-designer phenomenon, which Chalayan is “weirded out by.”

“If you have a really strong sense of style and people want to aspire to being like you, I can understand that,” he says. “But if you really are doing it just because you think of yourself as a brand and you haven’t had the training and you know nothing about clothes, it kind of demeans all the training that designers have had.” Perhaps, but the model has proved tried and true in more than one case (Kate Moss, Erin Wasson x RVCA, Elle Macpherson).

“But what happens?” he asks. “Should the stores support that? Where is it going?”

Moss is among the few whom Chalayan views as credible. Still, her Topshop efforts haven’t passed muster. “I don’t think it represented her, and I didn’t think she worked hard enough. I even told her to her face.”

“She said, ‘Oh, I’m just trying to do a light thing; I’m not trying to do anything serious,’” recalls Chalayan. “But I said, ‘That’s not the point.’”

Maybe not, but money and exposure are major factors in any collaboration, not only with Moss and Topshop but also with Chalayan and J Brand. He cops to that but insists maintaining a level of creative integrity has been key. “It wouldn’t be exciting to me to do this and sell three pairs,” says Chalayan. “This collaboration shows that our language can be applied to things that you can really wear.”

Indeed, that’s been one of his critics’ biggest complaints. For his part, Chalayan bristles at the idea that real clothes haven’t been part of his repertoire. His more outre work has been the subject of museum exhibitions and editorial fascination, but he doesn’t see them as his main contribution to fashion. “Our compositions, the way we create lines around the body, looking at what to cut, what to hide, what to reveal — it’s those kinds of things that have had more of an influence,” says Chalayan. “A lot of press don’t note that, to be honest, but the buyers note it.” Perhaps this new “commercial” Chalayan has been back in the showroom all along.