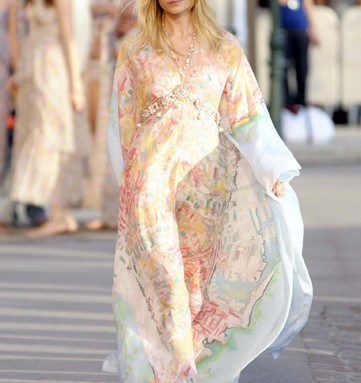 With that declaration, Karl Lagerfeld summoned another rich fashion moment, parading Chanel’s cruise collection at sunset in front of Sénéquier, a mythic cafe with endless rows of red director’s chairs from which to watch the beautiful people stroll by.

Having spent more than four decades — on and off — soaking up the jet-set Riviera culture, Lagerfeld let rip a youthful and fetching collection. The models disembarked from a boat and strolled barefoot in tunics, jumpsuits and loose trousers with a yacht-stuffed harbor as the backdrop, evoking the hedonistic, holiday spirit of this legendary town.

“There’s something magical about Saint-Tropez. It’s so easy, and it doesn’t require overcomplicated clothes. It’s not a bling-bling place, it’s a natural place,” he said during fittings here on Monday, dressed head to toe in pale gray, the sun streaming in through the open doors of the Pan Deï Palais hotel.

In strolled a model in a psychedelic print chiffon dress, with a fitted bodice and a free-flowing skirt. “This you can wear for daytime. You don’t need a ball for [it],” Lagerfeld declared.

At the show, Chanel ambassador Vanessa Paradis tucked her small frame into a second-row seat to avoid the paparazzi scrum. She lauded the “beauty of the old city, the colors of the building and the water” in the vacation spot of her childhood. “I played percussion with the Gypsy Kings here when I was six,” she said, flashing her signature gap-tooth smile.

The actress is on vacation, but is heading to Uzbekistan for her next movie role. “I play a French journalist who gets kidnapped by the Taliban,” she said.

Gaspard Ulliel, who is heading to the Cannes Film Festival for the premiere of his next feature, “La princesse de Montpensier,” said it was his first time in Saint-Tropez, which he equates with French celebrities and summertime frolicking. “It has a real atmosphere. It’s electric,” he said, surveying the crowds clustered on balconies or behind barricades to catch a glimpse of the fashion spectacle about to unfold.

Lagerfeld, who spends August sequestered at his villa at hideaway hotel La Réserve in nearby Ramatuelle, has seen Saint-Tropez in its heydays, shunned it in the Nineties, and saw it roar back in the past decade. He spends his time here much as he does in Paris — working, reading, sketching and daydreaming — albeit with magnificent Mediterranean vistas and with a quality of light to inspire any painter.

On occasion, he’ll cause a ruckus and descend into town to visit his favorite pharmacy, perfumery or Lapo Elkann’s Italia Independent shop, where Lady Amanda Harlech scored some “Avatar”-esque blue mirrored sunglasses. The VIP room, where Chanel’s after party was held, is another of the designer’s favorite addresses.

Lagerfeld said the collection was meant to evoke “the idea of Saint-Tropez,” from the sun-kissed colors of the port to iconic films such as “And God Created Woman” and its star, Brigitte Bardot. In his collection — and in the 17-minute film “Remember Now” he screened Monday night — were winks to French writer Colette, Françoise Hardy, Alain Delon and Mick and Bianca Jagger.

While often verging toward a vintage look — CC-logoed denim bell-bottoms, anyone? — the collection’s Sixties and Seventies references were mostly good fun, especially the chemise dresses, all manner of tunics, wide-leg pants and tubular dresses. A series of abundant white cotton looks, each cinched with a sash, were terrific, as were the long sundresses with tiered skirts. Low-heeled sandals and handbags in Vichy prints headlined the news in accessories.

Cruise represents an increasing, all-doors business for Chanel, including fast-growing emerging markets, according to Bruno Pavlovsky, president of Chanel fashion. “Business is booming for this kind of delivery,” he said.
Never mind climate change: According to Pavlovsky, “Customers love to see spring product in the boutiques in November.”

And though summer weather has yet to heat up much of Europe, many of Chanel’s well-heeled customers are almost ready to buy winter coats, and they’re in luck: The luxury pre-fall métiers d’art collection Lagerfeld showed in Shanghai in December is hitting stores now