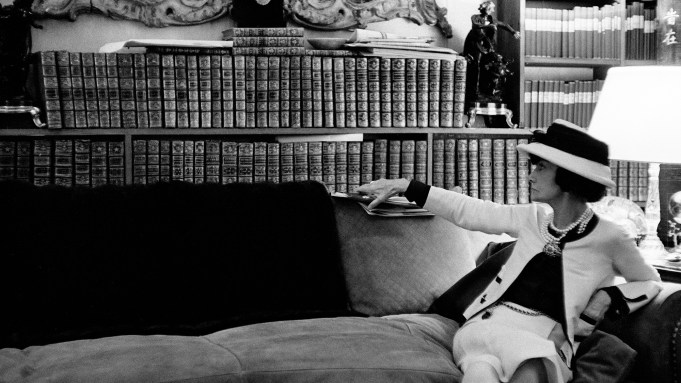 VENICE — Being connected today has become a way of life, but Chanel’s latest Culture exhibition takes the visitor back to a very different way of being linked to others.

Curator Jean-Louis Froment offers an intimate glimpse into Gabrielle Chanel through her association with artists of her time and her books in the exhibition, which is called “The Woman Who Reads” and which was unveiled Thursday at Ca’ Pesaro, the Venice museum of modern and contemporary art.

“Chanel was part of the world, she was connected in her time,” said Bruno Pavlovsky, the house’s president of fashion. The designer’s friendship with artists, writers and poets fueled her creativity, he said. He underscored how the exhibition also emphasizes the link with Karl Lagerfeld and his own work at the company.

To be sure, Froment said that by highlighting what shaped Chanel’s creativity and bridging it to Lagerfeld’s own designs — the only clothes on display — the exhibit is also an homage to the German designer. “It shows what is behind Karl Lagerfeld, too,” said Froment.

For example, in one room of the Baroque palace facing the Grand Canal, a black silk tulle dress embroidered with golden stars from the Métiers d’Art “Paris-Dallas” 2013-14 collection by Lagerfeld was inspired by Chanel’s 1932 diamond star brooches and manuscripts and drawings by Jean Cocteau on constellations and jewels.

A handwritten draft letter to Chanel by Igor Stravinsky from 1933 is only one of the pieces displayed near an evening multicolored outfit in printed velvet covered with black silk mousseline edged with green beaver fur that Lagerfeld designed for the fall 1997 collection with a Russian feel.

Cocteau’s study for a production of the tragedy “Antigone” from 1922 translated into a jersey coat in light and dark gray cashmere with geometric patterns by Lagerfeld for fall 2004.

“It’s very important to look to the future, but we also have to remind people that Chanel has roots,” said Pavlovsky.

On display are manuscripts, notes and drawings that were in Chanel’s apartment in Rue Cambon from artists including Salvador Dalí and Pierre Reverdy, as well as books and works by Filippo Tommaso Marinetti and Iliazd, such as a copy of “Afat” illustrated with six original etchings by Pablo Picasso, and miniature crystal trees by Misia Sert. The exhibition also displays rare pieces such as a “Madame Bovary” manuscript by Gustave Flaubert and Picasso’s “Woman Seated in an Armchair.” A statue of Aphrodite and an Asian stone that Chanel called “Aérolithe” are among other intriguing items on display.

The first Culture Chanel exhibition dates back to 10 years ago, but Pavlovsky underscored how relevant it was to stage “The Woman Who Reads” in Venice, the only city that would allow one to explore such “deep” subject matters, he said. The late designer lived in the Italian city after the death of her beloved Arthur Boy Capel, described by Froment as Chanel’s “cultural mentor,” who introduced her to philosophy, spiritualism, Indian texts and poetry, for example.

“He understood how intuitive she was,” said the curator. “Chanel is not only a brand, but an object of culture. It could seem abstract but it is not, we go to the root of creativity.”

Asked about future exhibits, Froment responded: “I don’t know if this stops a cycle or if it opens another one. I am rarely dominated by my work, I keep my distance, but this touched me with its plethora of archetypes.”

Keira Knightley and Anna Mouglalis were some of the celebrities expected at a cocktail and dinner event on Thursday to mark the opening of the exhibit, which will run until Jan. 8.

Separately, Ca’ Pesaro executives revealed that Chanel had made two donations of an undisclosed amount to the museum to help restore a staircase and a 1907 work, comprising 14 paintings, called “The Poem of Human Life” by Giulio Aristide Sartorio.