The exhibit arrived in China on Tuesday, with portraits of celebrities styled in the house’s iconic sheath serving as the backdrop to a party. 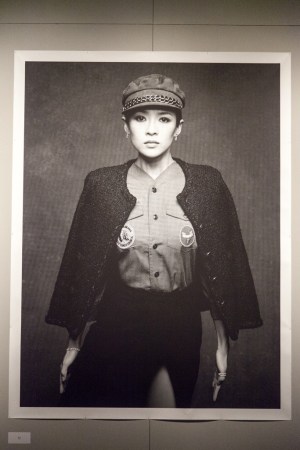 BEIJING — Chanel’s “Little Black Jacket” arrived in China on Tuesday, with Karl Lagerfeld and Carine Roitfeld’s portraits of celebrities styled in the house’s iconic sheath serving as the backdrop to a party for more than 1,000 people here.

Beijing and Shanghai, where the show opens Thursday, are the 13th and 14th global cities to host the exhibit. For China, Chanel’s creative director Lagerfeld added 21 new portraits to the ongoing series, including seven Chinese celebrities and style leaders. The Beijing opening, staged in one of the 798 art district’s open industrial warehouse spaces, also marked the debut of the second edition of the book, which includes the new portraits.

Swedish actress Alicia Vikander, who is among those featured in the latest series of portraits, chose the Beijing unveiling for her first visit to China.

“I see this as a great honor,” the British Academy of Film and Television Arts rising star winner said of being photographed in January by Lagerfeld for the Little Black Jacket project. “I’ve looked up to this fashion house since I was very young.”

China is one of Chanel’s most important markets, Bruno Pavlovsky, head of global fashion for the brand, told WWD before the exhibit.

Pavlovsky said that while China is incredibly important, Chanel is working hard to convey its image here to consumers as one of a whole luxury brand, not just a purveyor of accessories. Many luxury brands have made their names in China by relying heavily on bag, watch and sunglasses sales while core fashion styles remain less lucrative. It’s an ongoing challenge for the industry, in spite of China’s growing wealth and importance as a luxury market.

“Chanel is about luxury, it’s about creativity,” he said. “What we want…is for people to visit our boutiques and find out what we are about. We are not an accessory brand; we are a fashion house.”

Indeed, there were many in the crowd Tuesday evening adorned with Chanel logo pins and bags, flashing the brand’s symbol as part of their look. In the first hour, the exhibit took on something of a surreal air as the main gallery room was packed with spectators, each wall of photos filled with guests posing earnestly and grabbing self-portraits on camera phones in front of Lagerfeld’s portraits.

Pavlovsky noted that Chanel has only 10 boutiques in China and is in no rush to expand quickly without first considering carefully the market and what it can support. That’s a scant number compared with other major international fashion labels, many of which have dipped further and more heavily into smaller cities outside of Beijing and Shanghai in recent years, in some cases heavily loading the market with shops and boutiques.

“We need to be able to sell and find the right customers to sell ready-to-wear, as well as to be able to last for a long time here,” he continued.

In addition, he said, Chanel’s reach into new markets goes well beyond China, including countries like Thailand and Mexico.

The “Little Black Jacket” show, which changes in design and scope in each location, is a way to convey Chanel’s creative message in its most important markets. To that end, China has always been on the list as a destination.

“It’s a way to qualify what Chanel is, it’s a display of our creativity,” Pavlovsky said of the Beijing exhibit.

Lagerfeld, who did not attend the opening party in Beijing, provided WWD with a statement, saying the entire project has been, “for me, very interesting and fun.

“Carine Roitfeld styled all the different personalities; sometimes in something they would never dare in life to wear, or to wear it that way,” Lagerfeld explained.

“This little black jacket was a man’s jacket; Coco Chanel has the genius to translate that into a piece of clothing for [a] woman, timelessly modern,” he added. “Today the Chanel jacket is on the same level than the white shirt, the T-shirt, jeans and tank top.”

Actress Virginie Ledoyen, another black jacket wearer, also joined the Beijing premiere, remarking that it was funny she’s French but first saw the show in China. Ledoyen joined several Chinese celebrities on hand for the post-opening party, featuring a performance by British indie rockers Klaxons. Tilda Swinton is expected to help unveil the jacket exhibit in Shanghai on Thursday.