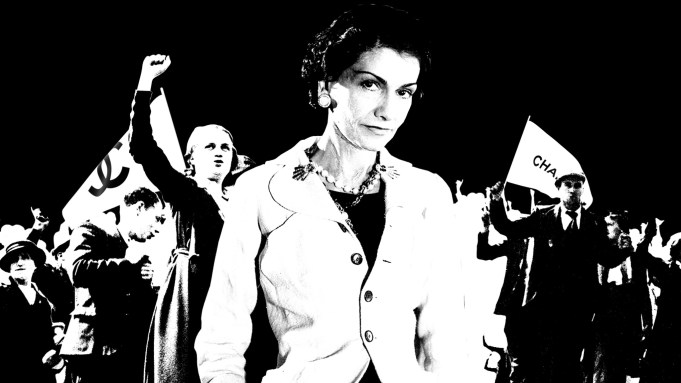 That’s the name of the brand’s latest handbag hope, its communications thrust for 2017 and a forthcoming fragrance — the company’s first new pillar in 15 years, named after the house founder and exalting the rebellious, mold-breaking spirit of her early years before she became Coco.

The Gabrielle Chanel eau de parfum, described as an “abstract floral,” is scheduled to premiere in Chanel’s boutique network and on its web site in June before a broader rollout, eventually reaching the firm’s more than 10,000 fragrance doors around the world.

Bruno Pavlovsky, president of Chanel fashion, and Christine Dagousset, global president of fragrance and beauty at Chanel, disclosed the flurry of developments exclusively to WWD.

“This year will be unique because we are boosting at the same time fragrance and bags, which are the two most important categories in our business,” said Pavlovsky, interviewed jointly with Dagousset at Chanel’s plush, black-and-cream offices on 57th Street here. “We believe it makes a lot of sense to highlight Gabrielle in 2017 because in each of our businesses we have a lot to say and also we want to seduce a new clientele.

“We are emphasizing the DNA, the roots of the brand. I think that more than ever this is something that is very important to us,” he added.

The house’s watch and jewelry division, helmed by Frédéric Grangié, also plans to roll out Gabrielle-themed collections this year.

To be sure, Chanel is betting that the Gabrielle scent will catapult its global fragrance franchise.

“Our goal is to put it into the top 10, so it’s not a niche fragrance,” said Dagousset. She declined to discuss numbers, but industry sources estimate that a fragrance needs to generate $100 million in annual net sales to rank 10th in the world and nearly $250 million to hit number one.

MORE: Rebel Ladies of Chanel: A History of the House’s Most Famous Muses

The positioning of the new scent offers a sharp contrast to Chanel’s 96-year-old fragrance business.

Dagousset described the young Gabrielle as a free spirit: “She was a Leo actually, so she couldn’t be tamed.” She declined to break down the composition of the scent, saying only that it was created by Chanel’s fragrance creator Olivier Polge.

With the new fragrance pillar, “we were exploring this whole moment of before Coco — who she really was at the core and that’s what we wanted to express in this new fragrance,” she said.

Chanel’s year of Gabrielle kicks off Wednesday with a three-minute film, “Gabrielle, a Rebel at Heart” — a fast-paced ode to the founder’s audacity and her convictions about female empowerment, daring and freedom.

It’s the 18th chapter of the firm’s popular “Inside Chanel” video series and the first of four that will be focused on Gabrielle Chanel. Previous episodes have been devoted to the iconic Chanel jacket, Marilyn Monroe or the camellia. Last year, “Inside Chanel” videos generated 25.6 million views on social media, according to the company.

The “Rebel” clip unfurls like a manifesto, as a female voiceover declares, “I decided who I wanted to be, and that is who I am” as crisp black-and-white animations show women engaging in sports and adopting the comfort and simplicity of Chanel’s cardigan-like jackets and straight skirts — worlds away from the strangling frou-frou fashions of the turn of the century.

Part two of the Gabrielle communication onslaught debuts on April 3: A campaign lensed by its couturier Karl Lagerfeld and devoted to the Gabrielle handbag.

Slated to start arriving in stores in March, the Gabrielle bag is meant to become a “pillar” style for Chanel, and is considered the first major new model since the Boy, introduced in 2011.

“We have a lot of seasonal bags in our collections and six times a year we are coming out with a lot of new things,” Pavlovsky said. “And every four or five years, we want to put the emphasis on one new style and this time it’s the Gabrielle.”

Unveiled on the runway in October amid a “data center” set at the Grand Palais, the Gabrielle is one of those deceptively simple yet ingenious designs at which Lagerfeld excels. He got the idea from looking at virtual reality goggles and upending the shape. Cue a flat-bottomed neo hobo with a double chain handle that straddles both shoulders for ease of carrying and security.

The bag — which comes in about half-a-dozen iterations, and in a variety of colors and materials, from classic black lambskin to exotic leathers — is to retail from $3,000 up to $33,000 for a large alligator version.

“At Chanel, design comes first and afterward we try to maximize these creations to be able to make the brand as strong as possible,” Pavlovsky said. “We are working together to make this launch quite efficient in every single country in the world.”

Chanel plans to reprise its Paris-Cosmopolite show — the name for its pre-fall Metiers d’Art ready-to-wear collection embellished by the couture ateliers it owns — in Japan at the end of May, in tandem with a special event around the Gabrielle bag.

Chanel’s signature quilted, chain-handled bags — known as the 2.55 and 11.12 — remain its top sellers. “We put some quotas on these two bags because we don’t want to overload the market with them and we have been able to develop the Boy, which is doing very well — almost the same level as the iconic ones,” Pavlovsky said.

The forthcoming Gabrielle fragrance will be among powerful siblings. Coco Mademoiselle, originally designed as a flanker of the Coco fragrance with limited prospects, went on to become number one in the world, where it remains, according to the company.

The backbone of Chanel’s fragrance empire has long been No. 5, which Dagousset admitted was in need of restoration.

“It had been lately losing share of market in some countries, to be very honest,” she said. The solution was to launch No. 5 L’Eau, which was aimed at Millennials, last year and “boosted the overall fragrance business” with a more than 30 percent sales gain over a three-month period, she said. Dagousset indicated that she expects No. 5 will regain its second-place spot when 2016’s global rankings are released.

“Our goal was to put No. 5 back on the map,” Dagousset noted. “We had all types of women who loved the idea of No. 5 but didn’t like the juice and they found in L’Eau a juice that they really enjoyed,” she said.

So the stage was set for  a new pillar. Describing the roles the fragrances are designed to play, Dagousset said, “No. 5 is more about  femininity and accomplishment. What Mademoiselle Chanel has is this whole paradox of being vulnerable and invincible…and impertinent. Gabrielle is really who she was [as Gabrielle]. We really want it to be the expression of who she was at her core as a woman whose values are so modern today…to feature who she was before she became Coco. We’ve done a lot of research with Millennial women around the world and you see very clearly they don’t want to be put in boxes. They want to live their own lives, they want to be themselves, they want to choose their destiny.”

Chanel’s destiny arrived, fittingly enough, when she was performing on stage as  a young, aspiring chanteuse in remote France belting out songs — “Ko Ko Ri Ko” and “Qui qu’a vu Coco” — that earned her a nickname that stuck for life and Coco was born.

The historic house is now showing off its rebellious side at a time when women around the world have mobilized in support of human rights in the wake of Donald Trump’s election as U.S. president.

“It’s in the air,” Pavlovsky demurred, noting that the same rebellious impulse was in the air three years ago when Lagerfeld’s spring 2015 show, on a Paris boulevard set, climaxed with a raucous demonstration, echoing the ferment that started bubbling in Paris over gay parenthood.

“It was a very symbolic and nice moment for the brand. These values are very important for what Chanel is today,” he said. “People who love this brand, the new generation, they want to be themselves, they want to do and they want to claim what they want to claim. And they know that Gabrielle Chanel in her time was already like that.”

The Gabrielle effort arrives amid strong business momentum for Chanel, according to Pavlovksy, who cited double-digit growth since the beginning of the year.

“We feel a very nice energy in our boutiques,” he said, also citing record orders for the latest Metiers d’Art collection, paraded in November at the Ritz Paris.

Starting in mid-2015, Chanel began harmonizing global pricing in an attempt to stamp out parallel markets and to ready the brand for an eventual online push. Pavlovsky acknowledged that “we suffered the first parts of the year” in 2016 as customers in Europe reeled from higher prices and Asian consumers watched price differentials of 30 to 60 percent evaporate.

“Now we are back to strong expansion. We are doing very well in China and the good news is we have seen Chinese customers coming back and buying our ready-to-wear, in China, and not just accessories,” he said. “[Price harmonization] was difficult, but a good decision and today we believe more than ever the customers are coming to Chanel because they love the product and not because they want to make money off the product.”

The Gabrielle focus trickles down to the house’s watch and jewelry division, which in January presented the Coco Avant Chanel high-jewelry collection inspired by the young Gabrielle Chanel and the signatures she had already developed in the early stages of her career as a hat designer, such as camellia flowers, lace and loose ribbons.

And at the Baselworld watch and jewelry fair in March, it will unveil its first ultra-exclusive ladies’ watch featuring a movement conceived entirely in-house.

The Première Camellia Skeleton watch contains the Calibre 2 movement, a tour-de-force that uses the wheels normally hidden inside mechanical watches to form a camellia pattern on the dial of a transparent, or “skeleton,” watch.

Among the handful of numbered editions on offer is a white gold version set with 7.85 carats worth of diamonds, including 246 tiny brilliant-cut diamonds nestled on the camellia skeleton, in what represents a feat of engineering.

Grangié, president of the division, said the creation was possible only because Chanel has worked in recent years to become totally independent in terms of its watch design and production.

“The caliber was first designed by our studio to illustrate the Chanel codes and to be as aesthetically pleasing as possible, and then handed over to our engineers,” he said in an interview in his office overlooking Place Vendôme, the square whose shape inspired the stopper on Chanel perfume bottles and the case of the Première watch, marking its 30th anniversary this year.

“That means that a model like this takes five years to develop, as opposed to buying a complication from an outside supplier and customizing it to achieve the desired look. Our process is strictly design-based and that, to my knowledge, is unique to Chanel,” he added.