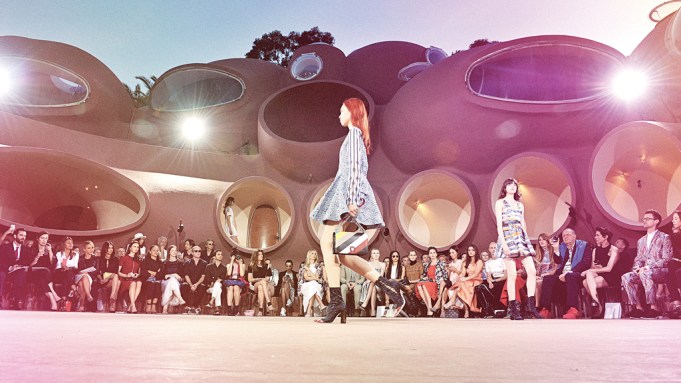 A multiday itinerary in a far-off locale, filled with free lunches, dinners, plane rides, car service, fancy hotels, late-night parties and tons of flash photography, all centered around the main event: watching pretty girls walk down an aisle. No, it’s not the destination wedding of your richest, most powerful friend or relative, but a fashion show, a mega one.

The biggest houses — Chanel, Dior, Louis Vuitton, Burberry, Lanvin, to name a few — have all taken to taking their shows on the road in the off seasons in what’s become a traveling game of luxury one-upmanship. In the last six weeks, Lanvin set off for Dubai; Burberry brought Britain to Los Angeles; Chanel hit New York by way of Austria and then took another separate collection to Seoul; Louis Vuitton “hoped” big in Palm Springs, Calif., and Dior closed out the luxury cruise season in a bubble palace in Cannes, France. Then there was Tom Ford, capitalizing on the Oscar crowd in February in Los Angeles.

The endgame: market share, instantaneous global brand messaging, client privilege and loyalty. Oh, to be a VIP customer — spend and ye shall receive.

The spectacular itinerant runway show is not a new phenomenon. Its roots are in the primal retail tradition of the trunk show, which, in its most basic form, involves taking a rack of clothes to different cities so clients can order early and potentially meet the designer. Along the way, the events evolved with consummate consumer- relations men like Bill Blass and Oscar de la Renta, who historically made special events in Lake Tahoe.

According to Sidney Toledano, Dior’s chief executive officer, Christian Dior himself was a pioneer of the deluxe trunk show, having staged reproductions of his Paris runways in Moscow and Dallas in the Fifties. To a great extent, it has always been and remains about targeting a regional market. But in the more recent past, as the productions have gone grander in scale, the traveling runway event has become a contest of transmitting the global brand at the highest level.

Chanel has been staging its Métiers d’Art show in cities other than Paris since 2004, when it showed in Tokyo. Additional destinations have included New York, London, Monaco, Shanghai, Edinburgh and Dallas.

“The brand image is a lot about agility,” says Bruno Pavlovsky, president of fashion. “As soon as everything is becoming too automatic or systematic or you forget the reason why you are doing that, and I think that the agility is the capacity to ask yourself every time what we have to do to push and to amplify it, the collection or any kind of event.”

As for cruise — or resort, as Americans call it — many European houses see it as an opportunity to work the increasingly important U.S. market, thus choosing to stage a show, or at least present the collection, in New York. Dior started doing this years ago when John Galliano was at the helm, holding proper, thematic and theatrical runway shows in New York.

When Raf Simons took over, the cruise show became more elaborate. Last year, the house ferried guests by water taxi to the Brooklyn Navy Yard. Earlier this week, it flew most of its guest list into Cannes, where Simons had chosen Pierre Cardin’s midcentury masterpiece Bubble Palace as his venue. (Originally the show was slated for Los Angeles. In late March, Louis Vuitton revealed that it would be showing its cruise collection in Palm Springs. A week later, Dior changed its plans.)

Asked if there’s pressure among the brands to jockey for more impressive venues, to escalate season after season, Toledano replies, “You call it pressure. I don’t know if it’s pressure. You have to have the organization to do it, by the way. But we need first of all innovation, creation of a new collection.”

Louis Vuitton is relatively new to the itinerant game, which is somewhat surprising given its heritage of travel, a buzzword ceo Michael Burke could not go without saying when describing its elaborate cruise show held May 6 in Palm Springs. Vuitton first hosted a destination spectacle in Monaco for Cruise 2015. Apparently it was worth the investment. While none of the houses would disclose the cost of staging such events, sources put several in the $10 million range.

“When you do cruise this way, it’s [like going] back in time when you had time to sit down and really see the clothes and understand what the designer is trying to tell you,” says Burke. “You get the silhouette, you get the vibe, you get the historical references. This is why the venue is so important.”

He points to the Monaco event, which had water as the main theme, as reflecting Nicolas Ghesquière’s collection. “The girls were walking basically on digitized water and the screen was linked with the color palette of the clothes and the music, the makeup,” Burke says. “Whereas during fashion week, when you do that it seems discombobulated with everything else going on. With a venue like Monaco or Palm Springs, the message is much stronger. The press and the clients, what they tell me is that they really appreciate it.”

And if all goes well, the customers show their appreciation with their checkbooks.

Mary Evilsizor, a Louis Vuitton client from San Francisco who attended the Palm Springs show, says she goes to the Vuitton store about once a week. She won’t say how much she spends, but puts it this way: “They go out of their way to invite us to events, and not just me but they include my family and my friends. A long time ago, my father was like, ‘Why do you buy so many purses?’ so I said, ‘Gee, Louis Vuitton, my dad likes sailing and it would be great if you could get him a ticket [to the America’s Cup sailing race] and they gave my whole family tickets and my dad has been a loyal customer ever since because of that one gesture. What’s appreciated is that they are so mindful and kind to their customers. That’s what brings you back. All these little perks make you feel like, ‘I could spend the same amount on a different product but they haven’t approached me to go to America’s Cup or lunch or any of that, but this company has, so I’m going to go to that company.’”

In the high-stakes consumer game, it seems, there’s more than one currency.