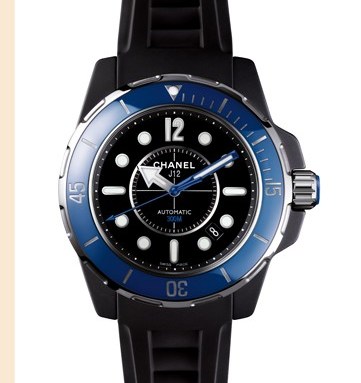 In addition, the J12 is waterproof to more than 300 meters, has glow-in-the-dark numbers and hands, a steel unidirectional rotating bezel, a self-winding Swiss movement and a rubberized strap with openings that allow water to flow through.

“Since we are known in watches more by women, we liked the idea of having a male ambassador for the J12 Marine,” said John Galantic, president and chief operating officer of Chanel Inc. “In Laird’s case we admired his energy. He is a true man of the sea, and he has been revolutionary in his sport and involved in charity. That spirit is very much in line with the watch.”

Hamilton will join Diane Kruger and Anna Mouglalis as personalities who represent Chanel through events and public appearances.

“I don’t endorse a lot of product and have never endorsed a watch, and I think that’s what brought me up on Chanel’s radar,” he said. “A real authentic, masculine timepiece is a departure from the Chanel brand image, and I think they were also looking for a departure in the type of spokesperson they chose.”

Hamilton put the watch to the test in the ocean and said its best attribute is perhaps the most basic: “It stays on my arm. A watch is going to take a beating getting banged around on surfboards and paddles, which is why probably every other watch I’ve ever had I’ve lost.”

The big-wave surfer, who is married to pro volleyball player and model Gabrielle Reece, explained, “I’m not coming from the fashion side of it. I wear a watch to tell time, and I need to be able to see in the dark. And it’s water-resistant to deeper than I will ever go. It’s the simple things.”