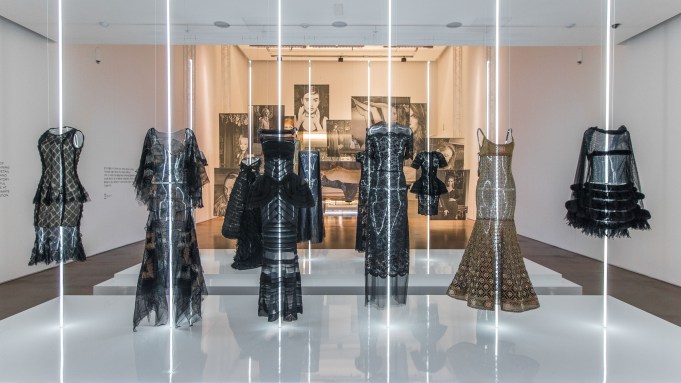 SEOUL — Almost two years after Karl Lagerfeld’s South Korea-themed cruise show, Chanel has returned to Seoul launch its latest Mademoiselle Privé Exhibition. In advance of a flagship opening here next year, the exhibition aims to better acquaint local audiences to the brand through “Mademoiselle” Gabrielle “Coco” Chanel’s experiences as a couturier, a fine jewelry-maker and inventor of the classic fragrance Chanel No. 5.

The interactive exhibition comes with its own namesake guide app, with guests walking through a series of rooms containing artworks chosen — and some created — by Karl Lagerfeld; a futuristic fragrance chamber that introduced the ingredients within Chanel No. 5; a maze composed of tweed and linen fabrics draped from ceiling to floor, and a grandiose hall with many of the fashion house’s couture creations, as well as other artworks.

De Maigret said she was impressed by the local fashion scene. “I’m very impressed by how chic [South Koreans] are, even men — which doesn’t happen much abroad. Everyone has structured clothes — it’s very modern and at the same time classic, it’s very Chanel in a way,” she said.

“I think the exhibition is gorgeous and dreamy, said South Korean actress Han Ye-seul. “I feel like I’m in Wonderland.”

Bruno Pavlovsky, Chanel president of fashion, was also in town for the exhibition opening along with the brand’s after party held at a warehouse in Seongsu-dong, Seoul’s up-and-coming hipster-meets-industrial district.

In an interview, he discussed everything from Chanel’s South Korea strategy to the brand’s recent boomerang controversy in May.

The first Chanel boutique in South Korea opened in 1997, Pavlovsky said. “Twenty years later, we decided to hold this exhibition in [South] Korea.…It’s about all the concepts [haute couture, perfume and fine jewelry] designed by Mademoiselle Chanel and between 85-plus years until now, you can see how these icons are still very valid and strong.

“This exhibition is [leading] the path for Chanel’s [upcoming] flagship opening here,” he added, citing that the brand has plans to open its first-ever South Korean flagship in Seoul next year.

“Today we are in 14 boutiques [in South Korea].…We want to have our own Chanel building in [South] Korea, which will be quite impressive for the image of the brand. I believe it’s a plus for our [South] Korean customers to have a flagship on top of [existing retail outlets] just to highlight the creativity of the brand.”

South Korea’s luxury industry has traditionally relied on Chinese tourism sales over the past decade, but Pavlovsky said the nation’s recent diplomatic tensions with China over the Terminal High Altitude Area Defense anti-ballistic missile system have not affected the brand’s strategy in South Korea.

“The tension between [South] Korea and China is more about Chinese [tourism] in South Korea. We see less Chinese in South Korea, but we have no comment about that….The reason we are doing this is for Koreans in South Korea. Our objective, our strategy at Chanel is to be very focused on local customers, clients, that’s the most important,” he said, adding that Chanel’s ready-to-wear sales in South Korea and China have been growing over the past year and have become the brand’s main sales focus at this point.

“We were sorry to create this kind of reaction,” he said about the initial outcry against the product. “Our job here is about dreams, we want to create dreams for people. It’s not about being nasty. So if we do things like that it’s not intentional and if people say you’re doing a mistake, it was a mistake.

“Any brand, anyone has to be ready to be in this permanent dialogue,” Pavlovsky added. “That’s something that we are doing every day.…Younger generations [of consumers] talk more because of social networks and they say what they feel on the spot. And things are more transparent. A long time ago, you even didn’t know people didn’t approve of what you were doing.

“I think we need to adapt ourselves as a brand to [such environments],” he said. “Sometimes we are inspired and everyone is happy — I can take the example of South Korea [Chanel’s cruise 2016 show]; I can take the example of Cuba [Chanel’s cruise 2017 collection]…Fashion is part of culture, what you’re doing in fashion is part of your culture inspired by your culture, and culture for others,” he said, adding that creativity cannot exist in a vacuum. “You have to be inspired.”