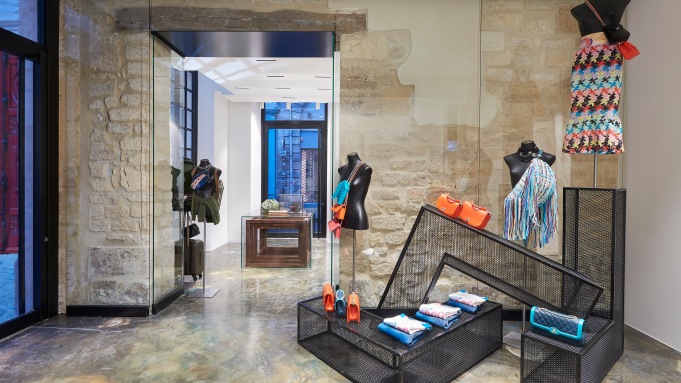 PARIS — The Marais district of Paris, prized for its historic buildings and Sunday operating hours, continues to attract high-profile retailers.

This week, Chanel opened dual pop-up boutiques in a landmark mansion known as the Hôtel Amelot de Bisseuil. They are slated to remain open through May 2017.

To the left of its double red doors is a 1,350-square-foot boutique showcasing ready-to-wear and accessories, headlined by the Coco Cuba resort collection that was unveiled in Havana last May. To the right is a 400-foot-space showcasing footwear.

Bruno Pavlovsky, president of Chanel fashion, said the brand seized on the exceptional location as a way to “test to see if there is some potential” in the neighborhood.

At present, Chanel operates a cluster of fashion boutiques around its historic Rue Cambon flagship and twin units on each side of the Avenue Montaigne, a key luxury thoroughfare.

For the Marais pop-ups at 47 Rue Vieille du Temple, Chanel left the spaces largely untouched, exalting walls of exposed stone, which are protected behind glass. Floors are made from resin to resemble steel, while fixtures are minimal: black rails and wooden consoles mounted on glass supports.

The diminutive shoe salon is described as an artist studio, with nothing “changed, adorned, reconstituted or hidden,” according to Chanel.

Chanel also operates a permanent beauty boutique in the Marais district since November 2015. The 800-square-foot location at 40 Rue des Francs-Bourgeois, in the L’Hôtel Herouet, also maintained many of that building’s original design elements, such as terra-cotta floor tiles, stone walls and 16th-century well.

It’s been an event-filled week for the French fashion house, which staged a trio of shows at the Ritz Paris for its Métiers d’Art collection, a luxurious pre-fall range embellished with the couture ateliers Chanel controls.

Karl Lagerfeld introduced the collection 15 years ago to bookend its cruise offering, allowing Chanel to deliver a new rtw collection to boutiques every two months.