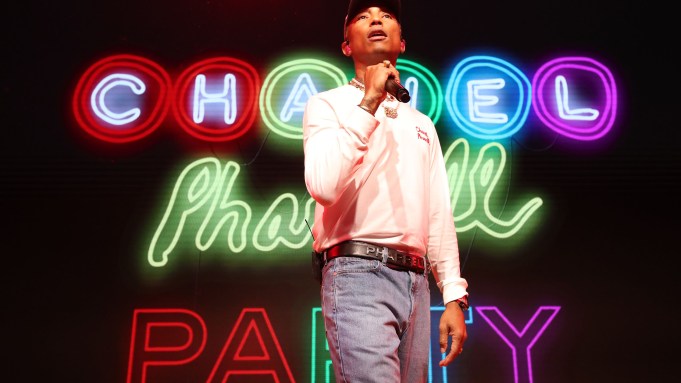 SEOUL — Chanel’s first flagship in South Korea was a bustling beehive on Thursday, as the new space in Apgujeong officially opened its doors for the first time to welcome Pharrell Williams and the debut of his much-awaited capsule with the luxury house.

The musician, known for pushing the borders of fashion’s gender norms, joined Jennie Kim from Blackpink and rapper Jay Park, in reveling to see the collection on the shop floor for the first time, which South Korea gets access to a full week before the rest of the globe.

“They’ve given me so much,” Pharrell told WWD. “They [Chanel] continue to put their arms around me and open their doors. I know that this opportunity has never been afforded to anyone else, and I just want to say how grateful I am.”

While there had been press speculation that this could be the French luxury house’s way of testing the market for men’s wear, the musician laughed the suggestion off easily.

“It’s not, it’s unisex,” he said, while wearing a pair of red sunglasses of his own design.

Chanel’s president of fashion Bruno Pavlovsky was equally emphatic in his directive not to overanalyze this capsule line.

“We have not decided that we want to launch any men’s wear line,” he said. “It is not our job. Our job is to offer the best for women. Sometimes men can [wear the clothing] for women but it’s not the business. We are focused on women’s wear and the 10 collections at Chanel are for women.”

While this special line has been a year in the making, with the late Karl Lagerfeld and Chanel’s new creative director Virginie Viard working together with Pharrell to bring it to life, the fashion industry will soon get a first proper look at the Chanel post-Karl in the upcoming Cruise collection.

Showing on May 3, it will be the first without any input from Lagerfeld and solely under the creative direction of Viard.

“It’s Virginie,” Pavlovsky said, “but the previous collection was also a big part of Virginie. Karl was there, he was supervising everything but Virginie was already designing a lot for the brand.”

Chanel’s president described Viard as having a “strong feminine touch” and said. while the Chanel team is “sad because we have lost somebody we love, at the same time, the team is very strong, full of energy, full of ideas to be able to continue the story he started to write.”

“I am sure that she is the best one to continue to write the story and legend of Chanel,” he added.

The house is in the midst of planning a celebration for Lagerfeld for June 20 in Paris although details are still being fine-tuned.

With this new flagship in Seoul, Chanel will count 10 fashion boutiques in the country, although the new unit is by far the largest. The brand first entered South Korea in 1991, subsequently opening its first fashion store in 1997.

“We are reaching another level,” Pavlovsky said. “Korea is becoming as mature as Japan, or the States, or France. It’s part of the top countries for Chanel.”

The 19,700-square-foot store’s first three floors are dedicated to ready-to-wear, handbags, shoes, fragrance, and high and fine jewelry. The fourth is used for private receptions, and the two upper floors and terrace are dedicated to special events and exhibitions.

The boutique’s architect Peter Marino noted that while he believed “Koreans are the best-dressed customers in the world at the moment,” high-end consumption in South Korea is still a relatively recent phenomenon.

“After the war, the country had massive debt and strict austerity laws made it hard for consumers to buy luxury goods,” Marino said. “It’s only recently that the bans were lifted. Now, all of the luxury brands have made huge investments.”

The Seoul boutique boasts 31 art works, including Pablo Reinoso’s “Breathing Monochrom Wall” near the front of the boutique, fan-motored pillows that form the double C logo when they “breathe.”

“This store is the least crowded [with merchandise] store I’ve ever designed. The money in Korea is always made in department stores, so we don’t have to cram it full of merchandise,” Marino said. “None of the [luxury] brands open these flagships or freestanding stores to earn money.”

Meanwhile, in neighboring China, despite predictions of a slowdown in luxury consumption, the Chanel president expects the brand’s business there to perform strongly this coming year.

“Very optimistic for Chanel, for China, and for the future,” he said. “We just opened two boutiques in Xian and Harbin. The business is doing very well, the ready-to-wear is very strong.

“We have now fourteen boutiques — it’s small compared to the main competitors [which have many] more.”