Only 10 days after the couture, the fashion house staged another show in Paris Friday. 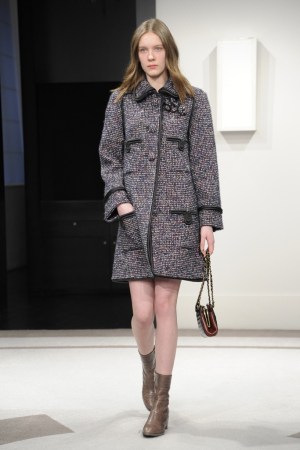 PARIS — Only 10 days after the couture, Chanel staged another fashion show here Friday — although strictly for buyers.

About 200 of them gathered at Chanel’s Rue Cambon salons for the commercial unveiling of its pre-fall collection, known internally as Act 1, with the fall 2015 runway show Karl Lagerfeld will mount in Paris next month known as Act 2.

While lesser known, the pre-fall range spans a vast offering of ready-to-wear and accessories, and is one of six collections delivered to Chanel’s boutiques and wholesale clients each year.

Last year, Chanel traveled to Salzburg for its latest Métiers d’Art, a luxurious collection embellished with the work of the specialty couture ateliers that Chanel owns, and to Dubai for its cruise show. Each was followed by another interim pre-collection.

Pavlovsky explained that the Métiers d’Art range is delivered to stores in May, Act 1 pre-fall in July and the Act 2 runway collection in September. “This allows us to have something new every two months in the boutiques,” he said, noting that most of its designer competitors only create two collections a season: pre- and runway.

Chanel began staging cruise shows in 2000, and added the Métiers d’Art range in 2002.

On Friday, Pavlovsky led WWD on a tour of Chanel’s plush black-and-white showrooms, with expansive areas dedicated to handbags, footwear and costume jewelry, the latter displayed in trays labeled with themes such as Lucky Badge, CC Clover or Pearly Gardens. Buyers have a choice of some 2,000 stockkeeping units in accessories, and about 400 more in rtw, over the nine-day buying session.

While some styles are considered mandatory for boutiques, and bestsellers tend to be universal, “it’s very important that every boutique has something specific,” Pavlovsky said. “They are in charge of the sellout.”

The executive lauded the capacity of Karl Lagerfeld and his creative studio, under the direction of Virginie Viard, to turn out multiple collections, each with a rich assortment of accessories, this season heavy on tote-style handbags and chevron-shaped quilting.

“That’s the only way for us to offer our customer a consistently new assortment at the boutique level. They like to be surprised,” he said. “It’s a very different approach than what other designers are doing.”

Chanel’s Act 1 pre-collections are “purchased more by product category” than runway collections, and they tend to be more focused on daywear, Pavlovsky noted.

The 79-exit pre-fall show opened with a series of A-line coats, their rounded shoulders and roomy sleeves among defining silhouettes across the collection.

Cozy textures predominated. Shearling came needle-punched with metallic-flecked tweeds, while knits and tweeds alike had nubby surfaces. Knitwear had a faint Seventies vibe with their rag-rug textures and either tubular or flaring shapes.

Overall, looks had a relaxed attitude, heightened by an array of pajama-like tops and pants and the low-heeled tweed booties that finished off most looks.

The show climaxed with an array of sport clothes, including spongy hoodies quilted with camellia patterns, and sturdy cotton parkas with jutting sleeves.

Lagerfeld occasionally shoots short movies or video clips around the Act 1 collections, with most communication done in the digital sphere, Pavlovsky noted.