The French fashion house held two shows of its 2016 Metiers d'Arts collection in the Chinese capital. 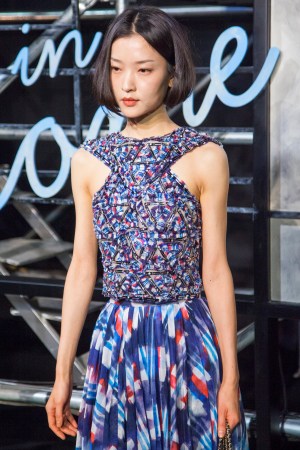 BEIJING — Chanel held its first fashion show in China in nearly a decade on Tuesday, signifying the French fashion house is working to connect more deeply with Chinese consumers and, in turn, bolster sales.

The brand staged two shows — one in the afternoon and another in the evening — of its 2016 Métiers d’Art collection, first shown in December in Rome’s famed Cinecittà film studio No. 5 against a vast set replicating romanticized Parisian streets filled with outdoor cafes, patisseries, wine shops and a cinema. The “Paris in Rome” show drew on Chanel’s ties to cinema in the Italian capital throughout the first half of the 20th century.

On Tuesday, Chanel erected a similar set in a gigantic blue tank, once a gasometer, located in Beijing’s 751 D-Park, a design and fashion development hub. In 2009, Karl Lagerfeld landed in Shanghai for the first time to showcase a collection on a barge on the city’s historic waterfront. Lagerfeld did not attend Tuesday’s shows, which drew more than 1,000 guests, according to Chanel.

“We did this very strategic and important move at Chanel,” Bruno Pavlovsky, president of Chanel fashion, said, referring to last year’s decision to harmonize prices globally. “Now we feel we are ready to accelerate our development in China with the Chinese. We have a lot of Chinese customers traveling everywhere in the world, and they want to reconnect with the brand when they are in China. We believe pricing was the main obstacle to that.”

With only 11 boutiques in Mainland China — and no immediate plans to open more — Chanel is one of a handful of luxury players that have maintained a relatively small footprint in the country.

“We are not in a hurry,” Pavlovsky said.

Even with a concerted strategy to keep a tight control on distribution here, Pavlovsky said the fashion house has conducted surveys in recent years that indicated a large amount of Chanel products, in particular accessories, sold in the country are counterfeit.

The executive said it is a constant battle to stop this, but he believes the new pricing structures will help — and it seems the decision to harmonize sticker prices was largely aimed at the Chinese.

He also said the fashion house wants customers to connect more deeply with Chanel’s ready-to-wear collections, now the top-selling product category in the country, as that will help protect the brand in a market where luxury players have struggled to maintain their appeal with the most savvy consumers, who can be turned off to a brand when its products, either real or fake, become overexposed in the market.

He added: “It is easy to open boutiques and sell tons of accessories, but that is not what Chanel is about.”

The pricing structure in conjunction with showcasing the 2016 Métiers d’Art collection, available in all Mainland boutiques beginning Wednesday, will help “build something that is more meaningful for the customers,” Pavlovsky said. “Something that is a bit more subtle and for the future of the brand [in China].”

The executive said he sees China as an increasingly mature market, yet one where Chanel has many more consumers to acquire. While he declined to release sales figures, he said the company witnessed double-digit growth last year — although he admitted that the brand, like so many others, has been impacted by slowing economic growth here.

“We had quite a good year — that is good news for us — but there’s no doubt that growth in 2015 was smaller than the year before,” he said. “But in some boutiques we still have double-digit growth, so we believe it was the right decision for Chinese consumers to offer this price [harmonization] worldwide to boost acceleration.”

He added that he sees the slowdown in sales growth in China as “temporary” and similar to other markets where consumers may choose to buy one piece from a rtw collection versus several. “It’s nothing special compared to other countries,” he said.

“Over the past five years, probably the Chinese were the number-one nationality in terms of growth not only in China, but also everywhere around the world,” the executive said. “When you are in such a position, I think that at some stage it is normal to see some kind of slowdown.”

There are no plans to venture into e-commerce in China, yet Chanel is bolstering its digital strategy to give consumers a deeper connection. At Tuesday’s event, guests used WeChat, the mobile chat application, to check in. Chanel showcased videos and other content from the Rome show in December on its WeChat account.

An array of celebrities also attended the “Paris in Rome” shows Tuesday.

Kristen Stewart, the face of the ad campaign for the 2016 Métiers d’Art collection, appeared briefly on the red carpet for the afternoon show before exiting, leaving an empty seat next to French model Caroline de Maigret and Pavlovsky. At the evening show, Stewart, who’d been out with de Maigret the night before, said she was ill.

“I just feel like my skin is crawling on my back,” she said. “I couldn’t sit through the first show. It’s not that bad but it is not ideal for going to a fashion show.”

This was Stewart’s second trip to China — she visited Shanghai and spent a few weeks in more rural areas in the country, she said, adding that she wished she could stay longer, but due to a schedule change, which she called a “bummer,” she was due to leave early Wednesday morning.

“It is the most foreign place I’ve ever been just in terms of mentality,” she said. “It is not just the language barrier – those exist in a lot of places. It is just incredibly surreal. It is difficult to integrate. You never feel like you have a firm grasp of anything. I think it would take a long time to feel like I really got to know China. It is just different.”

This was also not de Maigret’s first trip to China. She visited last year to promote the Chinese release of her book, “How to Be Parisian.”

The model has plans to visit the Beijing studio of controversial artist Ai Weiwei as well as make a trip to the Great Wall on Wednesday before leaving for New York.

“We [she and Stewart] went out last night and it was really fun — went to a lot of hip-hop bars,” she said. “[The Chinese] are much cooler and warmer than the expectation.”

China is “interesting because you really feel how work is the main statement,” de Maigret said. “It is like god is work in a way.”

“This is all very new to me,” Dou said. “It is my first time coming to a legit fashion show. I’m actually quite clueless when it comes to fashion — I just dress the way I like and I don’t know whether it is fashionable or not, so when it comes to shows like this, I don’t really have any idea of what it is supposed to be like or how to just whether it is good or not.”