The 12,600-square-foot unit is located on New Bond Street directly across the street from Louis Vuitton’s London flagship and next door to Dior. 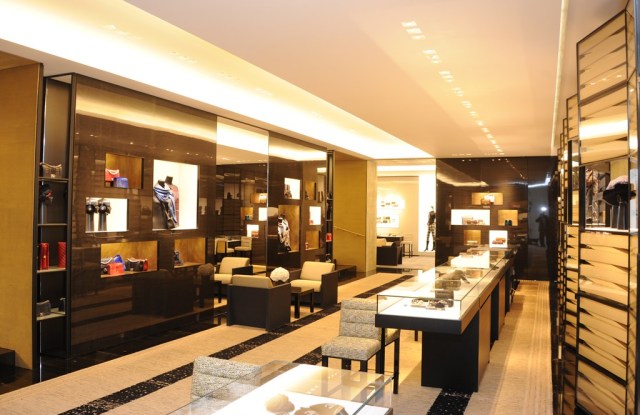 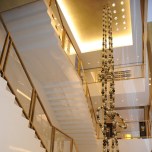 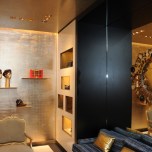 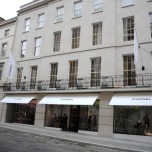 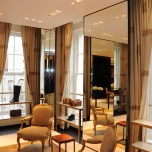 LONDON — The camellia-studded gloves are off.

The Chanel boutique on New Bond Street here — the largest in the world — opens for business today directly across the street from Louis Vuitton’s London flagship and next door to Dior. The space, which spans 12,600 square feet over three floors, has been designed by Peter Marino and is filled with new artwork inspired by Coco Chanel’s lifestyle and the symbols of the brand.

The company is billing the new store as the most luxurious of all its retail outposts, and Marino said there is no doubt the London store out-luxes every other Chanel location.

“We commissioned 25 works of art — usually when I do a store I get three, four, five works,” he noted. The art in the store was inspired by pearls, camellias and pieces of art and decoration from Coco Chanel’s Rue Cambon apartment.

“Look at this,” Marino said gesturing to a long hall on the third floor, its walls hung with a series of shiny black paintings by Gregor Hildebrandt — and zero merchandise on display. “What could be more luxurious in a store than empty space — filled with art? That old retail recipe of ‘sales per square inch’ doesn’t work with me,” he said.

Bruno Pavlovsky, president of Chanel fashion, said it took nearly two decades to find the perfect location and a space that was the right size. A smaller Chanel store was previously located on nearby Old Bond Street and there are other, smaller stores in London.

He called the new store a mix of “luxury and creativity. The art, architecture and fashion work well together. The store is about lifestyle and ambiance, not product.”

Located in the former Nicole Farhi space, the new store has a central atrium dominated by a giant, twisting pearl necklace sculpture by the French artist Jean-Michel Othoniel, handmade matte bronze railings around the marble staircase and furniture and walls covered with tactile tweed and bouclé fabrics. It is filled with works by artists including Donald Baechler, Idris Khan, Liza Lou and the brand’s head designer and creative director Karl Lagerfeld.

The store carries the brand’s full range, with makeup and accessories — including a handbag bar — on the ground floor; ready-to-wear and footwear on the first; and high-end rtw on the top floor. Inspired by the spaces at Rue Cambon, it’s meant to feel like a private home.

“I don’t know what’s more amazing, the shop — or the architect,” said Jasmine Guinness who, along with her pal Jacquetta Wheeler, was mesmerized by Marino at the opening party on Tuesday night, which was followed by a dinner at Harry’s Bar.

“I’m secretly admiring him from afar,” Wheeler said of Marino, who was decked out in his uniform of dark sunglasses and black biker leather. “I thought he was a rock star, but then someone told me he was the architect. What a brilliant look.”