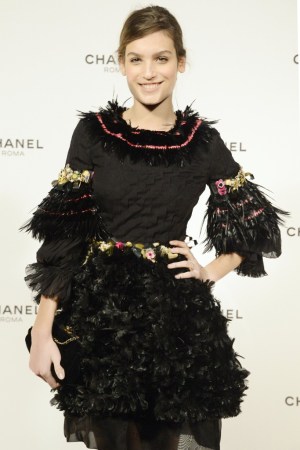 “We’ve finally found the right location, with more space for ready-to-wear, to better show the Chanel collections,” said the company’s president of fashion, Bruno Pavlovsky, sitting on a sofa in the boutique’s exclusive Salon Privé, a space on the top floor, dedicated to VIP customers. The French label previously operated a smaller boutique on Via del Babuino. The new store quietly opened in December.

Chanel has recently renovated several stores in Italy and will continue to invest in its retail business in the country, said Pavlovsky. To wit, a second boutique, in Venice, will open at the end of the year.

Despite the fact that Rome that day was being vandalized by a horde of Dutch hooligans gone wild, who were in the city for a Europa League soccer match, the Chanel party on Thursday night wasn’t disrupted. The event was held at Rome’s Villa Giulia, which houses the National Museum of Etruscan art.

“It’s a kind of change. Before I had to come to Rome only for Fendi, now for Chanel, too,” said Lagerfeld, referring to the visits he plans to pay to the Eternal City for Chanel’s Métiers d’Art show that will take place in the Italian capital on Dec. 1. “But Rome remains the inspiration for Fendi, and Paris for Chanel,” said the designer, who added he has made more than 800 trips to Rome over the years.

“Karl was with us working on the collection until a few minutes ago,” said Pietro Beccari, Fendi’s chief executive officer, who arrived at the event with his wife and daughter. “It’s the second time he comes to the Palazzo della Civiltà [Fendi’s new headquarters] and he keeps taking pictures. He says there is a good vibe.”

“At the beginning, I thought it was too much,” said Lagerfeld, referring to the monumental building where the party was being held. “But now I really like it — the light is stunning.”

Fendi’s accessories and men’s wear creative director, Silvia Venturini Fendi, was also present at the event. “Yes, I’m here to celebrate Karl,” she said, before sneaking into the location.

Actress, model and singer Alma Jodorowsky said she came to Rome only for the event. “I have to go back to Paris to work on the editing of a music video I directed and which will be released on March 4,” said the French beauty. Asked about her schedule during the upcoming Paris Fashion Week, Jodorowsky said she will only attend the Chanel show and “maybe just a few other shows I really like, but I’ll keep it easy.”

It was one night only in Rome for Cécile Cassel, too. The French singer, who performed at the party, said she was due to hand out a prize at France’s national movie award César on Friday night. “We are working on the release of the new album, ‘All around the world,’ ” she said, adding it will be out in the U.K. in the spring, and in the United States in September.