Peter Marino said the new flagship in Shanghai, long known as the “Paris of the East,” derives its inspiration from the Paris apartment of Coco Chanel. 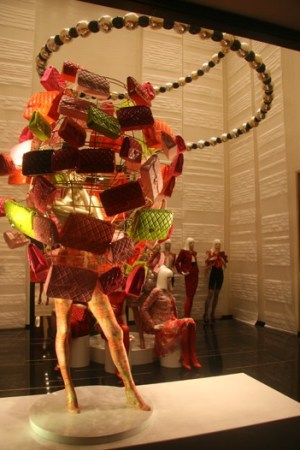 The boutique that Chanel is heralding as its most elegant, refined and sumptuous opens today in Shanghai.

Designed by Peter Marino, the more than 5,160-square-foot store is in the Peninsula Shanghai Hotel — the first new building on the city’s historic Bund waterfront in more than 60 years — and developed by the Old Shanghai hotelier family the Kadoories.

The store is opening in advance of Karl Lagerfeld’s visit to Shanghai next week, where he will launch a special “Paris-Shanghai Métiers d’Art” collection and film in Huangpu Park across from the store on Dec. 3. Although now a construction zone, the Bund’s extensive redesign is intended to transform the area into a luxury showcase in time for next year’s World Expo.

Marino said the new flagship in Shanghai, long known as the “Paris of the East,” derives its inspiration from the Paris apartment of Coco Chanel. Chanel’s signature gold frog, Asian in origin, is replicated in the window displays and combined with other regional design tropes such as birdcages.

The salon rooms of the store exhibit a variety of antiques and specially commissioned new artworks. From the ceiling of the entry hangs a swirl of gold and black Muran glass pearls evoking Chanel’s iconic necklaces and designed by French artist Jean-Michel Othoniel. An Yves Klein acrylic table, a Sixties starburst mirror and 18th-century French chairs adorn the shoes and accessories areas. A steel and crystal screen by Christophe Côme, a bronze table by Ingrid Donat and a Goossens crystal chandelier join the collection in the watch and jewelry section.

Marino, who has designed Chanel boutiques in Paris, New York, Los Angeles, Moscow, Hong Kong and Tokyo, said he tried to avoid the explicit nostalgia evoked by the Peninsula and its location, and embraced Shanghai’s modernity.

“I hate to tell everybody in Paris, but I’m from New York, and Shanghai is the number-one city in the world today. So that’s — you’ve got to go there to see it,” he said. “At the moment, I say to everybody, ‘You want to be a citizen, a modern citizen of the world, you have to go to Shanghai.’”