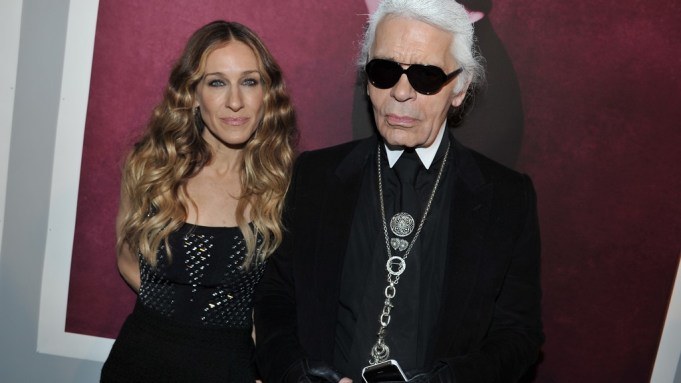 TOKYO — It may be fashion week here but there’s little doubt that Chanel is stealing the spotlight with a string of events underscoring the significance of the brand’s ties to Japan, just one year after the devastating tsunami disaster took place.

On Wednesday night, the house hosted a party to inaugurate Karl Lagerfeld’s new photography book and the opening of its exhibition, “The Little Black Jacket,” which runs through April 15, at an art gallery in Aoyama before traveling to eight other countries. Lagerfeld and Carine Roitfeld, who edited the book of black-and-white photographs of celebrities wearing the iconic garment, held court with a bevy of celebrities including Vanessa Paradis, Sarah Jessica Parker and current Chanel campaign model Alice Dellal.

“This is a special homage for Japan because after what happened, I thought it was a nice thing to do for Japan,” said Lagerfeld, who today will stage a reprise of Chanel’s spring-summer haute couture show at Shinjuku Gyoen National Garden, a large park in the city.

“It’s fun to see it again in another country, in another world, like on another planet with other people,” he said of the show. “It’s quite interesting. Maybe it will look like a different collection. I don’t know.”

The designer, who is making his first trip to Japan in eight years, spoke enthusiastically about his appreciation for the country, particularly the way it handled itself after last year’s tsunami. “I think they survived it pretty well and did it with great style and as a country [others] could learn from them,” he said.

Still, the ever dietary and weight-conscious Lagerfeld couldn’t resist another observation about the people here and how they have changed since his last visit close to a decade ago. “It’s changed a lot but it’s changed for the better I think. I noticed that people became bigger than before because now they eat more cake and sweets and things like this that they didn’t do in the past. There’s a real change in the look of the Japanese people. Normally, before, they were all tiny. It’s the kind of beauty you get from junk food,” he said.

Also on the topic of culinary pursuits, Lagerfeld was quick to add that his favorite spots in the city are the restaurants.

“You know I don’t eat bread, I don’t eat sugar, I don’t eat meat, so for me, the Japanese kitchen is perfect,” he said. Although he made one noteworthy exception. “I hate rice,” he said emphatically, recalling a time when he had to eat a rice-only diet for 11 days to recover from an illness. “After that I could never have rice again in my life.”

The designer said he likely won’t have much time for shopping, but he would like to check out the new Comme des Garçons Dover Street Market store. “I buy their men’s clothes in Paris at Colette so I want to have a look here,” he said.

Lagerfeld indeed has a busy schedule over the next few days. After today’s show, Chanel will throw open the doors on a three-week “ephemeral boutique” in the Omotesando area. An after party at a separate location will follow.

Bruno Pavlovsky, president of Chanel’s fashion activities, said the trio of events aims to show that the brand, which has 36 fashion boutiques and 13 fine jewelry boutiques in Japan, is “optimistic for the future.”

The executive recalled one of his recent trips to Japan last June, just a few months after the massive quake struck the northeastern part of the country. He said it was similar to his being in the U.S. after 9/11.

“You know, it’s difficult to be someplace and to try to organize some business when people are suffering.…So it was not the best time, not at all,” he said.

Pavlovsky said Chanel’s business last year declined from 2010 levels but the first few months of 2012 are shaping up well so far. Still, he voiced caution about the coming months.

“When you are in Japan, you love Japan but sometimes they question themselves about the future,” he said, adding that Chanel’s local team has raised questions about the summer period and Japan’s energy supply.

Roitfeld noted that Tokyo’s lights seem a littler dimmer than her last visit 10 years ago, but the Japanese people’s enthusiasm for fashion seems just as strong as ever.

“They love fashion in a non-blasé way…they love it but they don’t take it too seriously,” she observed.