When Karan guest-moderated a Fashion Group International trend panel last month, the idea of change was a key subject. 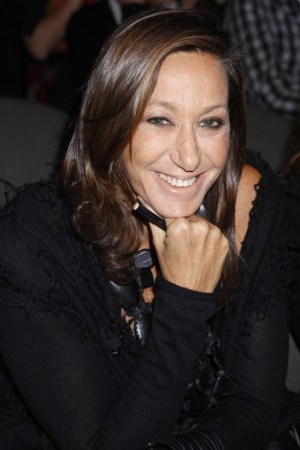 NEW YORK — For more than a decade, Donna Karan has talked about changing the fashion system to deliver clothes to stores in season — an idea gaining traction with retailers because of economic upheaval.

When Karan guest-moderated a Fashion Group International trend panel last month, the idea of change — and how the fashion community can galvanize to bring it about — was a key subject.

The event began with a 50-minute video presentation of spring trends, with Marylou Luther, the FGI creative director who served as narrator, touching on runway trends ranging from the “American Idol” preference for denim to what she described as “Show and Tell” transparency and the “New Playing Fields” way of taking sports looks into sportswear.

Bergdorf Goodman senior vice president Linda Fargo, a panelist, lauded Karan for taking the initiative and expressed support for the change. “The cycle will need to be completely redesigned so that the consumer is getting clothes when she really wears it,” Fargo said.

The issue of early markdowns because of excess inventory is being addressed, with stores adjusting their buys to limit supply to demand, she added.

Panelist Lincoln Moore, Saks Fifth Avenue vice president and divisional merchandise manager for handbags and accessories, stressed the importance of training the sales staff to understand the value of a product, beyond just the brand or fashion aspect.

Another panel member, Ikram Goldman, owner of Chicago’s Ikram boutique, agreed, saying success depends on both service and the faith the store has in its designers. “I try to encourage our staff to sell what they believe in,” she said.

Karan said “information overload” — with runway images posted online minutes after a show — has robbed fashion of “some of its sexiness.”

Goldman said the immediate consumer interest — and then waiting six months to get the actual garment — can be a double-edged sword. “It’s not the information, it’s the timing of information,” she said.

While the accessibility of information, and its immediacy, has increased the general interest in the industry, it also contributes to the loss of fantasy. Goldman said she is always looking for surprises, and often works with designers to offer special, exclusive pieces that haven’t been seen before.

Pre-collections are considered to be the lion’s share of retail businesses, often accounting for as much as 70 percent of many store buys — and that’s without the hype of a runway show. Karan challenged the panel to consider incorporating elements of those seasons into the main spring and fall collections. “What if pre-collections were your collections?” she said.