PARIS — It seems that Charaf Tajer has the Midas touch.

As a partner in the Paris-based creative collective Pain O Chokolat, he cofounded the clothing label Pigalle and launched some of the city’s hottest night spots, including Le Pompon. Since the debut of his Casablanca label in 2018, the men’s wear line has gone from strength to strength — and even Donatella Versace has taken note.

Always quick to spot new talent, Versace’s chief creative officer reached out to Tajer to discuss the possibility of him designing men’s wear for her label, though the outcome is still up in the air.

“It was a pleasure to meet her,” Tajer says in a Zoom interview from London, where the Casablanca brand is based. “If one day I go to a house like this, what is important to me is to feel free. One of my dreams is to design for one of those houses, just for the symbolism of it, but we’ll see.”

In the meantime, the serial entrepreneur has big plans for his own brand, which was one of the shared winners of the LVMH Prize for Young Designers last year, and is one of six finalists contending for the 2021 International Woolmark Prize.

After launching a women’s capsule with Net-a-porter last August, Casablanca will present its first full coed collection on Jan. 23 during Paris Men’s Fashion Week, as well as teasing the next installment of its red-hot sneaker collaboration with New Balance.

And the 36-year-old designer doesn’t intend to stop there. Tajer plans to develop a full lifestyle offering, with the ambition of positioning Casablanca among the apex of French luxury brands.

Tajer was born in France, but his parents met working in a tailoring workshop in the Moroccan city that inspired the label’s name. “Coming from immigrant parents, I fell in love with the French culture,” he says.

He would accompany his mother as she cleaned homes in the tony neighborhoods of Paris, absorbing the codes of the French bourgeoisie along the way. As a result, the Casablanca man is not shy about wearing silk scarves and strings of pearls, but the brand’s signature look is a retro-style, terry-cloth track suit — a symbol of a vanished leisure class.

Capitalizing on his network of entertainment connections, Tajer has tapped rappers Gunna and Swae Lee to walk in his shows. Meanwhile, his flamboyant silk shirts have been adopted by celebrities including J Balvin, Travis Scott, Gigi Hadid and Hailey Bieber — hence the decision to launch women’s wear.

“We have a lot of women wearing the men’s line already so for me, it’s a continuation,” says Tajer, who hopes to expand into other categories like home wares. “I would love to, because for me, it’s a lifestyle that’s not exactly represented in other brands.”

Likewise, he would like to capitalize on the success of his collaboration with New Balance on the 327 sneaker, which sold out in less than a minute when it was initially launched last April. According to fashion search platform Lyst, the second drop in November sparked a 233 percent rise in searches.

“We’re going to continue, definitely, the New Balance collaboration. But yes, of course, it’s one of my dreams to develop a proper Casablanca shoe line,” Tajer comments. “I think it’s super important, but it’s also a passion for me. I really love doing sneakers and shoes in general.”

From its first presentation, staged in his mother’s apartment, the brand has been carried by leading retailers. Today it is present in almost 150 points of sale worldwide, including Harrods, Galeries Lafayette, Maxfield, The Webster, Tsum, Isetan, United Arrows & Sons, and Lane Crawford and I.T in China.

Needless to say, 2020 wasn’t all rosy, but like most ambitious businessmen, Tajer talks a big talk, even when times are tough.

“We faced a lot of challenges, but I think being positive, it’s not only being positive in good moments, it’s also seeing the positive in darker moments,” he says, declining to disclose revenues for the label, which he owns with a silent partner.

“It was very hard to be in confinement and create garments, first of all, and also to keep the spirit very high,” he muses. “I mean, none of us have ever faced anything like this, and we’re still facing it. So one of the biggest challenges, definitely, is being able to work and give pleasure to people at a time when we don’t really know where we’re heading.”

For a designer whose aesthetic is rooted in travel, watching the planet grind to a halt was even more jarring, though Tajer typically made the most of it. After getting stuck in lockdown in Hawaii while on a research trip in March, he channeled the experience into a psychedelic collection for spring 2021. The fall 2021 collection is inspired by the fantasy of the Monaco Formula One Grand Prix.

“The thing that I’m the most proud of this year is really how our team got tighter and more together, and yes, of course, everything we’ve achieved with Casablanca. The fact that people are loving the brand more and more, and that the brand is growing, it’s fantastic. I’m still surprised by the way people have reacted to Casablanca, even from the first day. I never expected that,” he says.

“People look at our images and our clothes with a unique sense of gratitude, even more so because we now understand a trip to the mountains, to watch a sunset, is something super special,” he says. “It really helps people to understand even more the message that we have in the brand.”

Casablanca has two full-time painters on staff, producing aspirational imagery like a cruise liner sailing underneath a rainbow, or a speedboat chopping through turquoise waves. All its prints are created in-house, and the fabrics are manufactured in Lyon and Como, two cities historically specialized in silk production.

Tajer hopes his upbeat vision resonates with a wide audience. Baseball caps sell for 95 euros, silk shirts for around 650 euros, while tailored jackets can go for up to 2,500 euros — though most are priced under 1,000 euros.

It’s an attitude that is rooted in his identity as one of the few designers of North African origin in France, a country that still struggles with the reverberations of its colonial past. Last year, Tajer donated a day’s worth of online sales to the National Association for the Advancement of Colored People in the wake of the Black Lives Matter movement.

“For me, it’s obvious that I’m going to support that because I am from this background, and I have experienced those kinds of things. So I know exactly how it feels to feel powerless in the face of that,” he says. “My goal is to bring people together, it’s to make people understand each other.” 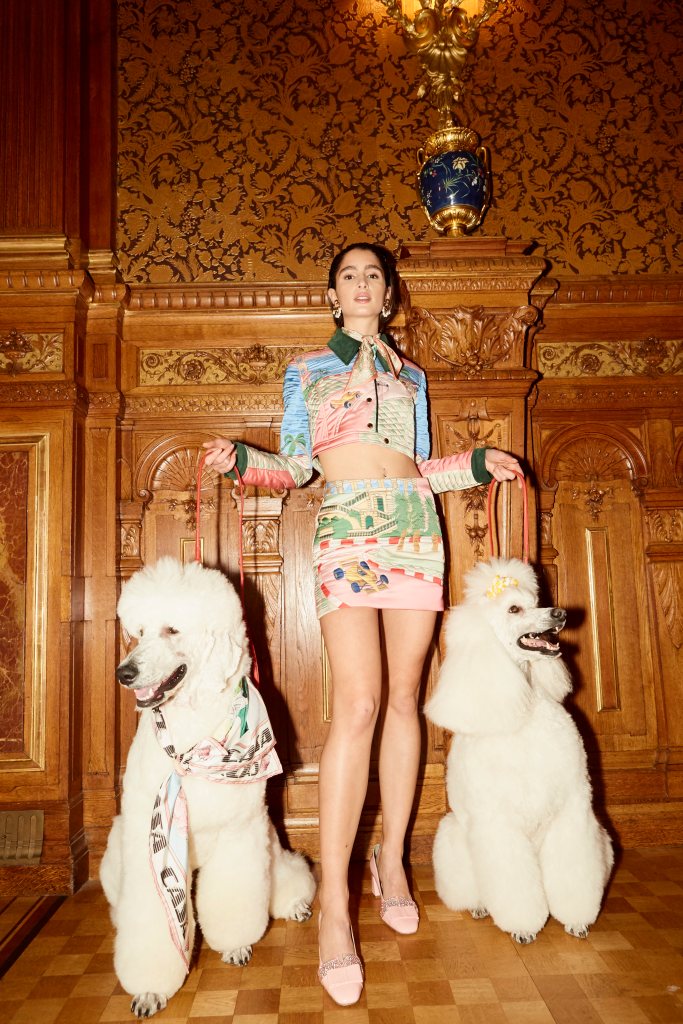 His passion for travel fuels everything he does. “To me, the most beautiful thing to do in life is to discover other cultures, to meet other people. I’m in love with the world that we live in,” he says. “We’ve been blinded by looking at differences, but we can also look at the things that we have in common. Differences are not necessarily a bad thing.”

Tajer knows what he’s talking about. “I’m an Asperger, so I can tell you, what you can do with your brain is quite unique. It’s quite special to use your brain to focus but also to dream. It’s a fantastic tool,” he said, crediting the syndrome for making him perceive things in a heightened way. “I am a hypersensitive person as well, so the mix is interesting.”

Despite Brexit, he has decided for now to maintain his company in London, where most of his 22-person team is based. Tajer, who lives in Paris the rest of the time, likes the focus he gets from working in another city.

“Really, from the moment that I come to London ‘til the moment I leave London, I’m literally only working and going home and going back to the office. So it’s very convenient to me, and I think the way English people work is also a different dynamic from the French, so it’s very interesting,” he says.

“But if I have to go back to continental Europe, I will. I’m kind of having a dream of having my office in Italy, somewhere nice,” he adds.

“For me, the level of execution that you can find in certain houses there, or the respect that they put in the food, all of that shows me how we can keep going in sophistication and developing this sense of respect for others through well-done craft. That’s why I love Italy so much,” he explains.

While Casablanca is not positioned as a sustainable brand, Tajer says its products are developed in an environmentally responsible manner, by limiting the use of water, ink and other resources, and favoring natural materials like organic cotton, and buttons made of coconut shells instead of plastic.

He likes to think of his clothes as collectible items that can eventually be handed down from generation to generation.

“This is where it gets more sustainable, and also the idea of putting a message into the clothes. That’s very important for me as well, to remind people that the world is not dead, we’re not living in a cyber world. If you open your eyes, if you go just outside your house, you can touch a tree. This is what we need to protect,” he says.