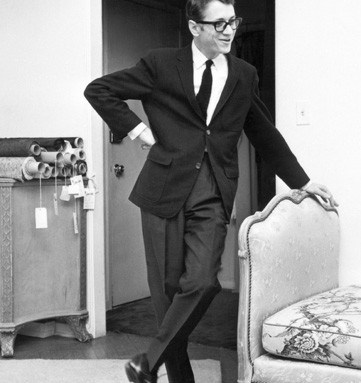 Charles Kleibacker, who followed up a decades-long career as a fashion designer with a second act as a museum curator, died Sunday at the Ohio State University Medical Center. He was 88.

The cause of death was pneumonia, according to Nannette Maciejunes, executive director of the Columbus Museum of Art, where Kleibacker was still working as adjunct curator of design.

Nicknamed “Master of the Bias,” Kleibacker developed a loyal following for his meticulous designs with Diahann Carroll, Pat Nixon, Irving Berlin’s wife Ellin Mackay and Happy Rockefeller among his former private clients. Harold Koda, head of the Metropolitan Museum of Art’s Costume Institute, who first met Kleibacker in the Eighties when assembling a symposium about Madeleine Vionnet for the Fashion Institute of Technology, said, “When you’re working at the level of technical facility that he had, the client base was shrinking rapidly. That wasn’t what American clients were expecting of an American designer.”

But his second career was equally impressive in Koda’s eyes, noting how Kleibacker shifted his focus to highlighting the achievements of other designers such as Gilbert Adrian, Pauline Trigère and Hattie Carnegie and, in doing so, introduced a new generation of designers to their work. “That really was his legacy,” Koda said.

The bespectacled, jaunty designer also created an off-the-rack collection that was sold at stores such as Bergdorf Goodman and Henri Bendel. In addition to his own label, Kleibacker acted as a consultant for fabric companies and during the dawn of shopping malls, he hopscotched across the country hosting fashion shows highlighting how their new fabrics could be used by designers and copied by women who preferred to sew their own clothes at home.

Isabel Toledo, one of the designers he championed later in life, said, “He was a great American original. He really bridged the gap between couture and ready-to-wear. He was a real craftsman who knew how to make clothes fit on different types of women. He took off where Vionnet left off.”

Toledo continued, “He loved fashion more than anyone I have ever met. It is amazing how he found a way to develop it after designing his own collection. He really introduced middle America to fashion.”

Largely regarded as self-taught, Kleibacker spent many of his childhood days in the rtw department of his family’s department store in Cullman, Ala. After earning a journalism degree from the University of Notre Dame in 1943, he took a job as a cub reporter before going back to school at New York University for a graduate degree in retail. Afterwards, he toiled as an advertising copywriter for De Pinna, a now-long-gone Fifth Avenue specialty store. In the late Forties, Kleibacker switched tracks, signing up to work for songwriter Anna Sosenko, who indirectly led him to what would be his professional calling. On tour with Sosenko, also the manager for singer and entertainer Hildegarde, Kleibacker became acquainted with couture houses like Christian Dior. In 1954, his portfolio of designs helped him to land the assistant designer post for Antonio del Castillo, Lanvin’s head designer at the time.

By 1957 he had returned to New York to work as a freelance designer before joining one of Seventh Avenue’s more established companies, Nettie Rosenstein, as an assistant designer. Three years later, Kleibacker ventured out on his own, unveiled the Kleibacker studio and earned his nickname for a signature cut which maintained simplicity, fit and comfort. Before long, his creations were heralded in WWD, Vogue, Harper’s Bazaar and Town & Country, and the designer cultivated a loyal following.

In 1984, Kleibacker headed to Columbus as a visiting professor in the department of textiles and clothing at Ohio State University, where he helped the school acquire clothes from Brooke Astor, Jayne Wrightsman, Pamela Harriman and Isabel Eberstadt. He went on to curate 13 exhibitions in the state including, most recently, “Class Act: Storied Designers/Women of Note” at the Columbus Museum of Art last year.

Maciejunes said, “He really only had one standard and that was excellence. He would say, ‘No, no, no. We have to.’ As an institution, he left us a better place, a stronger and better place because of that passion to do his best.”

Kleibacker was in New York last month for the opening of “American Beauty: Aesthetics and Innovation in Fashion” at the Museum at FIT, which features a few of his designs. Deputy director Patricia Mears said she routinely consulted with him.

“He was one of these people who had a dream and a vision,” she said. “As a designer, he was about creating a garment and not selling a concept.”