Robert Stock, designer of the Robert Graham label, is collaborating with Food & Wine to design chef jackets for the magazine’s Best New Chefs. 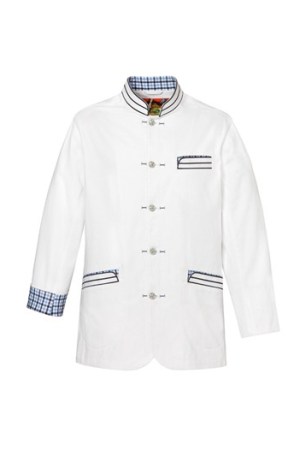 Robert Stock shouldn’t have a hard time getting a reservation at one of the city’s top restaurants.

The designer of the Robert Graham label has formed a collaboration with Food & Wine and designed chef jackets for the magazine’s selections for its Best New Chefs. The jackets are inspired by classic styles of the Twenties and Thirties but use patterns and colors from the designer’s spring 2011 collection in details such as contrasting interior patterns and colorful yokes.

The chefs were feted at an event Tuesday at the Bohemian National Hall, and were photographed in the jackets for the cover of the July 2011 issue.