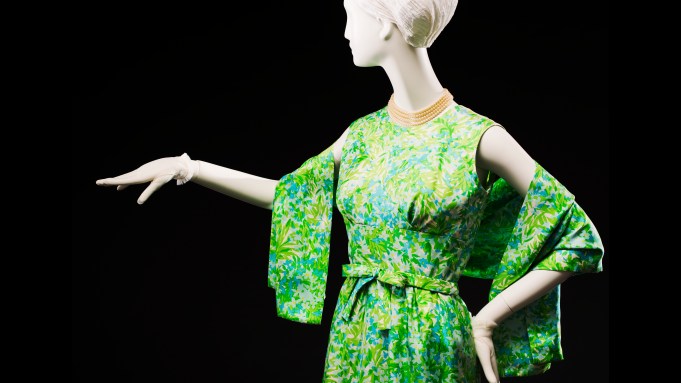 CHICAGO — The Chicago History Museum will explore the life and legacy of Main Rousseau Bocher in an upcoming exhibit titled “Making Mainbocher: The First American Couturier,” which opens on Oct. 22.

The exhibition, which will mark the first of its kind dedicated solely to the work of the Chicago-born designer, will feature about 30 garments from the museum’s permanent collection as well as fashion illustrations, early drawings, photography, audio presentations and video.

“All of the mannequins will be fully styled — pearls, gloves, the whole nine yards. He was very particular about the way his women dressed. He had strong views on what it meant to be dressed like a lady. People would seek him out as a voice of guidance and what was happening in fashion,” said Petra Slinkard, curator of costumes at the Chicago History Museum, adding that it is making paper wigs for each mannequin to complete each ensemble.

From aspiring artist to magazine editor to designer, the exhibit will look at the many roles Bocher held before achieving acclaim under his fashion label. “He was an extremely interesting man. He wore a lot of different hats. When he started off in Chicago, he had no intention to go into fashion; he wanted to study music. He wanted to sing professionally, that was his first love. He lived a lot of lives before he decided to open his couture salon when was 40 years old,” Slinkard said. “He had a pretty multifaceted and varied journey to get there. That’s the crux of the exhibit, hence the title ‘Making Mainbocher,’ looking at all these steps he took to go on to achieve international success and be regarded as a well-respected couturier in the mid 20th century.”

Born in 1890, the designer grew up on Chicago’s west side and rose to fashion fame when he designed the wedding dress and trousseau for Wallis Simpson, the Duchess of Windsor, in 1937. He also created uniforms for the Navy WAVES during World War II, the Girl Scouts and nursing students at Chicago’s Passavant Memorial Hospital. Known for his innovative and elegant designs, the designer is credited with introducing the first strapless evening dress and helping to popularize the cocktail dress.

Exhibit highlights include a suit identical to the style chosen by the duchess for her trousseau; two strapless gowns, one with a matching choker and bracelets from fall 1947 and another from fall 1951; a sleeveless tea-length cocktail gown from spring 1954; a black velvet opera cape with sable fur trim from fall 1955, and two pieces donated by the couturier himself in 1968, including a plaid wool coat from fall 1937 and a two-tiered sleeveless tulle evening gown from spring 1937, both with a Paris label.

“We have some nice documentation between Phyllis Healy, the curator at the museum at that time and him. There are some letters back and forth between him and her discussing the donation and those will be on display,” Slinkard said.

In 1992, the museum had a small exhibition focused on the designer’s uniforms, with eight pieces, called “Uniformly Feminine.” The only other show devoted to the designer is an online exhibition hosted by the Museum of the City of New York.

Slinkard said she thinks the exhibit and Bocher’s life will resonate well with people today — at a time when everyone is pushed to learn new skills and evolve professionally.

“He was really a struggling artist for so long. It took a while for him to find his footing and all of it was driven to become a musician. During World War I, when his music career doesn’t come into fruition, he ends up at Harper’s Bazaar doing fashion illustrations. Then from there, he becomes an editor of French Vogue, then he becomes editor in chief of French Vogue,” Slinkard said. “His story is one that is very inspiring — particularly to people today who are constantly trying new things and challenging themselves to stretch and grow in different directions. I wish he was here so I could talk to him, but my perception of him is that he was very resourceful, driven and he just didn’t give up.”