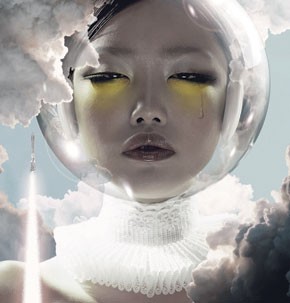 In the lead up to and under the pretext of this summer’s Beijing Olympic Games, China-themed events are proliferating around the globe. The largest is Britain’s expansive, yearlong “China Now” series, a highlight of which is the “China Design Now” exhibition running now through July 13 at London’s Victoria & Albert Museum.

“The levels of energy and experimentation in China are at an all-time high, and over the next five years we are going to see its global impact,” says co-curator Lauren Parker, adding the exhibition focuses on the pioneers of design who are shaping China’s cultural landscape.

“China Design Now” encompasses contemporary graphic design, fashion and architecture through 200 pieces by 100 different designers, of whom 95 are Chinese. After London, the 10,760-square-foot show, cocurated by Zhang Hongxing, will travel until at least 2010 with stops in the U.S., South America, the Middle East and possibly elsewhere in Asia. “China Design Now” is structured chronologically and geographically as well as by discipline, under the headings “Frontier City,” “Dream City” and “Future City.”

The show’s narrative begins with the “Frontier City” of Shenzhen, where graphic design and visual culture first emerged in the mid-Eighties, then continues with the appearance of an aspirational middle class and “lifestyle” trends in the “Dream City” of Shanghai. It concludes with the architectural transformation of “Future City” Beijing in preparation for the Olympics.

“We want to present a balance,” said Parker. “The show is not a celebration of contemporary Chinese culture, but rather a presentation of that culture and its context. We are not showing the newest, but rather giving a broader overview. We tried to be representative.”

The fashion component comprises the designers Lu Kun, Han Feng, Wang Yiyang, Ma Ke, He Yan and Zhang Da, who represent styles ranging from the nostalgic to the avant-garde. “Han Feng, He Yan and Lu Kun have three pieces included each, and Ma Ke just has one,” Parker detailed. “Zhang Da and Wang Yiyang have created new work for the show, a mixture of on mannequins and lying flat.”

Parker admitted the decision to use Shanghai as the focus for the fashion section was as much about imagery as the realities of the industry. “The interest in Shanghai is due to its role, things stemmed out from there. Beijing was very important in the Eighties and Nineties, but the next generation chose Shanghai as a base, partly due to its adjacent textile industries [in Zhejiang and Jiangsu Provinces]. And designers like Han Feng when coming back to China chose Shanghai for the commercial opportunities.”

It also provided the base for figures like Yue-Sai Kan, who introduced the beauty business to China, and fashion and lifestyle publisher Chen Yifei. She added, however, that Shanghai designer Yiyang has now shifted his sales focus to Beijing.

Parker and Zhang did their most in-depth research about the early emergence of a graphic design scene in Shenzhen, which hit its stride in 1992 with a first exhibition to introduce the concept to China. “It had a big influence, and in the early Nineties Shenzhen served as a conduit from Hong Kong,” Parker explained. “The Shenzhen Graphic Design Association held the first of a series of poster exhibitions, and that led to the new generation of designers, mostly in Shanghai and Beijing. A lot of designers moved there for work in logo and packaging design. That is no longer the case in the digital age, and most designers would rather live elsewhere. The city has gone through a bit of an identity crisis, but the original pioneers are still there: It wobbled, but is recovering.”

While trailblazers like Wang Shu and Di Shifeng remain and continue to hold the Graphic Design Biennale at the Guan Shan Yue Museum, much of the young generation has moved to or emerged from Beijing.

The architectural story begins in 2001, the year China ascended to the World Trade Organization and won its Olympic bid, Parker explained, and both connected to “the linking concept of ‘China’s hopes and dreams.’ Architecture started with the entrepreneurial aspect, which led into the social aspirations, and then to the national aspirations, to see themselves as part of a global community. The Olympics provided a starting place for this. The strands include local, independent architecture, using local materials and reimagining vernacular traditions. There is also ongoing urban research, asking big questions about sustainability, transportation and livability. We include Urban China, and eco city projects like Dongtan.

“We’re showing a variety of Architecture with a capital ‘A,’ and also urban interventions and ideas of presentation and transformation,” she added. “The catalogue includes essays, especially looking at Beijing and how it is changing, and smaller projects like a photo essay on Beijing by theater designer Zheng Li. We also look at housing, how people are living, the shift from work unit-provided to their own, purchased homes.”

Extrapolated from the larger themes are four individual case studies the curators felt were representative of and instrumental in the changing Chinese aesthetic. Joining Yifei and Kan are Hong Kong-based director Wong Kar Wai and Soho China. “Chen Yifei had a huge impact on lifestyle and design culture, and sums up in one person the shift from old to new China,” explained Parker. “This is especially the case with his entrepreneurial activities, especially Vision magazine. A lot of designers and fashion photographers started out working with him. He is definitely part of the story.”

Soho is the Beijing developer behind several stylish office and residential developments around the city. “Soho is not just an architectural firm. They were one of the first to champion Asian architecture,” said Parker. Kar Wai was included, Parker explained, because they felt his 2000 film “In the Mood for Love” reintroduced the glamour of Thirties Shanghai — although it was set in Sixties Hong Kong, and had far less impact in Mainland China than the cottage industry of best-selling nostalgia novels by Wang Anyi and Chen Danyan since the early Nineties.

The goal of the V&A exhibit is to provide some context to what is currently going on in China and to give Chinese designers international exposure. “What China has at the moment is a thriving grassroots movement based on individuals. It is all about creative freedom. What is lacking is the infrastructure, the official support and mainstream understanding of design’s value. Without the infrastructure, it is hard to grow without going very commercial, and they have to work very hard,” said Parker.

Still, the duo is optimistic that China’s design scene will continue to boom As co-curator Hongxing said, “It’s the moment when we can start talking about things being ‘designed’ in China, not just ‘Made in China.'”