The household trousers-maker in China released a modern and easy-to-wear collection inspired by the modern-day maritime silk road. 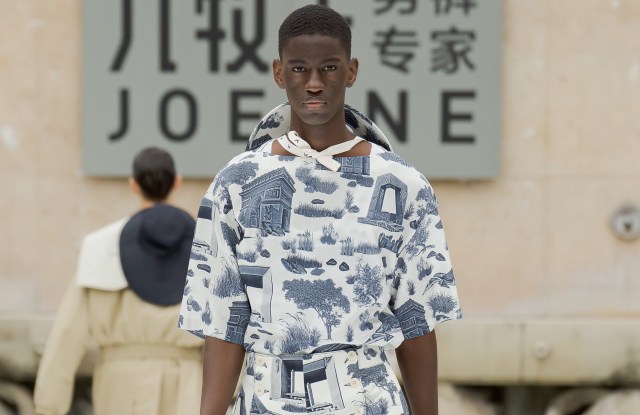 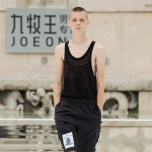 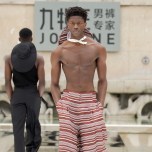 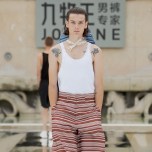 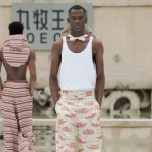 PARIS — Joeone, a leading Chinese fashion group that’s known for trousers, made its Paris Men’s Fashion Week debut on Thursday with a collection designed by Paris-based emerging designer Louis-Gabriel Nouchi, ahead of his own show at Palais de Tokyo.

The show started with models wearing simple tank tops to spotlight trousers in various cuts. After that, models showcased full looks, which felt modern and easy to wear.

This is Nouchi’s second offering after being quietly appointed the artistic director of Joeone. Designing a dozen great trousers is no easy task, he said after the show.

“It’s more difficult than making a jacket, especially for men’s wear,” he added.

A highlight of the collection is the use of a specially developed toile de jouy pattern tracing a journey along a modern-day silk road, which serves as a manifestation of Joeone’s ambition to branch out beyond China, and in line with Chinese President Xi Jinping’s One Belt One Road initiatives. It features sketches of Beijing’s iconic CCTV headquarters, Shanghai’s Pudong skyline, as well as Paris landmarks like the Louvre, the Arc de Triomphe and the Grande Arche de la Defense.

The show presented a younger direction the brand needs to court China’s increasingly fashion-savvy Millennial and Gen Z consumers. Some of its local competitors have been upgrading their images as early as a decade ago.

Since 1989, Joeone has built a sizable empire in China. The narrative of the main brand Joeone remains relatively unchanged. It prides itself to be one that standardized trouser-making in China and claims that a pair of Joeone trousers are sold every seven seconds.

As the Chinese fashion market shifts to a younger and more casual direction, Jeone tried to bring Maison Kitsuné to China under a joint venture structure in early 2019 and aimed to open 50 stores in the next five years, but the deal was called off a few months after.

Nouchi said he was hired because “they need a pair of fresh eyes,” and his approach regarding tailoring helps the brand expand its offering to “easy, luxurious, comfortable and confident” clothes, and provide an opportunity to show the world that “Joeone is totally able to do a Paris Fashion Week level show.”

Nouchi added that the collection will be shown again in China later this year, and it will be sold at selective high-end Joeone stores across China.

Besides producing runway collections, Nouchi said he also oversees all of Joeone’s product categories, such as bags and shoes, and he is pushing the brand to introduce knitted pants and jackets.

Frendi Zhang, communication director at Joeone, told WWD that after overcoming months of long-distance communication due to travel restrictions, the brand was pleased with the outcome, and the company believes that this is “only the beginning” of its new journey with Nouchi.