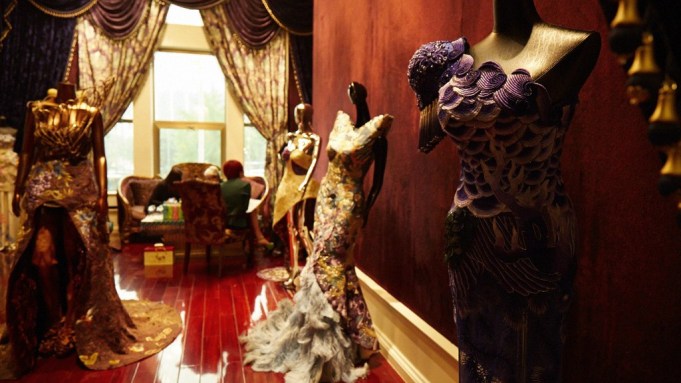 Their motive is not only to attract foreign customers but also to build credibility among Chinese consumers, who rely on what’s hot in Paris and Milan to help drive their own fashion choices.

It’s no secret that Chinese luxury buyers have become highly prized in the past five years for their penchant for travel shopping, buying trips to Paris and other destinations. The travel retail scene has made establishing a presence outside of China a vital strategy for homegrown designers and brands.

The power of China’s buyers is massive and increasing. And despite concerns over cooling periods and guarded economic growth, China will potentially grow to account for one-fifth of the global luxury market by 2015, according to a recent report from McKinsey & Co. The consultancy also noted that Chinese designers are lagging far behind their foreign counterparts in terms of sales and draw. By setting footprints in Paris and Beijing, designers like Shandong-born, Paris-based Laurence Xu and others are looking to catch up.

Xu, who has until now focused on an exclusive clientele, is preparing for his first runway show on July 4 during Paris couture season. Shiatzy Chen also shows in Paris and has retail shops in Paris, Taiwan, Hong Kong and Macau — some of the top shopping destinations for wealthy Mainland Chinese.

Gazing around his lavish-yet-chic new boutique at the Raffles Hotel in central Beijing, Xu speaks about his sources of inspirations — an obscure film, a piece of ancient Chinese poetry and reflection in quiet outdoor spaces.

Xu’s cinematic creations are far from subtle, with gowns cascading in bold colors, intense patterns and blends worked mainly around the finest Chinese silk. In a twist on the global luxury design trend of folding smaller elements from Chinese culture into typical European or American designs, Xu instead blends elements of the West, like British lace, into the deep colors, intricate embroidery and strong lines of traditional Chinese clothing design.

“This is an old Chinese poem,” Xu said, gesturing toward one of his creations, an elaborate gown that incorporates silk, hemp and actual gold fibers in its mix. “You can see vines, old trees, sleepy crows, a small bridge, a stream running by and the home. This piece illustrates the entire mood of the poem.”

Neither Xu nor the Shiatzy Chen label would disclose sales figures, but said their business is growing quickly as demand picks up in China.

Christine Zhao, a Paris-based fashion consultant and board director for Inlife International, a Chinese luxury brand consortium, said Xu — whose designs her company is promoting — is on the cutting edge of a key trend in Chinese consumerism: customization in luxury goods. The wealthiest consumers want clothes and a look that is tailored exactly to their own tastes and needs, something in which Xu specializes.

Zhao, who spoke after the unveiling of Xu’s central Beijing appointment-only showroom, said she believes the power of mass-mall consumption in China is diluting brands. It’s a dangerous trend at a juncture when China’s own consumers are developing more discriminating tastes, she said.

To that end, her company unveiled a strategic plan to focus more on buyers rather than property developers. This may seem like a simple idea, but it turns on its head the current retail environment in Beijing and every other Chinese city.

“China has a bad commercial environment. China’s shopping malls are part of the real estate-system, which is not buyer-centered,” said Zhao. “This system does not encourage innovation or diversification. It drives out customization.

“But I think this system will be washed out,” she added. “Beijing has many shopping malls, which are full of foreign luxury brands and domestic large brands. The large brands have strong economic power but are not that good at fashion.”

Shiatzy Chen, the Taiwan-based couture brand, is working along similar lines but has been at it for far longer. The brand is growing its reach in Mainland China, becoming especially popular for maintaining its design links with Chinese cultural traditions.

The label just celebrated its 35th anniversary in China with a show and party earlier this month at Beijing’s Grand Hyatt hotel, after which head designer Wang Chen Tsai-hsia sat down with WWD for an interview.

Wang said Shiatzy Chen has long believed that indigenous Chinese design and staying true to traditional elements are critical concepts. She explained that Taiwan, which split from the mainland following China’s civil war in the Forties, has offered a cultural haven as traditional Chinese customs are often more closely held on the island than in greater China.

Wang said she is witnessing Mainland China undergo the same shift in trends and tastes she witnessed in Taiwan when Shiatzy Chen was first created, a steady shift back toward China’s traditional culture customs and style sense.

“Several decades ago, wives of Taiwan entrepreneurs (the trendsetters) worshiped foreign things a lot,” said Wang. “There were a lot of imported goods, but then they became accustomed to and fed up with these foreign things.

“The same is true with mainland,” she continued. “It has begun to return to traditional culture and toward appreciating domestic culture and design. I believe this is just the transition period and the old traditions will come back.”

There is little doubt Chinese consumers, particularly those at the higher end, have become more discriminating in their fashion choices in recent years. Loudly labeled, mass-marketed luxury goods are fading out fast as the wealthiest customers look for more discreet products with superhigh-quality fabrics and tailoring.

“I think Chinese higher-end consumers have changed their tastes mainly because they have gotten to know more brands and the market has provided them with more choices,” said Beijing-based fashion buyer Foniz Huang, who works with upper-income clients. “They have become pickier than before. More products on the market tend to have concise design and styling.”

In that regard, China’s own designers and companies might have an edge. They are watching the shift happen up close and picking up where a demand for precision and personalization is taking hold quickly.

Shiatzy Chen’s Wang said she expects China’s influence will only grow, as will its demand for tasteful products and homegrown design.