SheJi-Sorgere is being billed as the first made-in-Italy luxury menswear brand specifically for China. 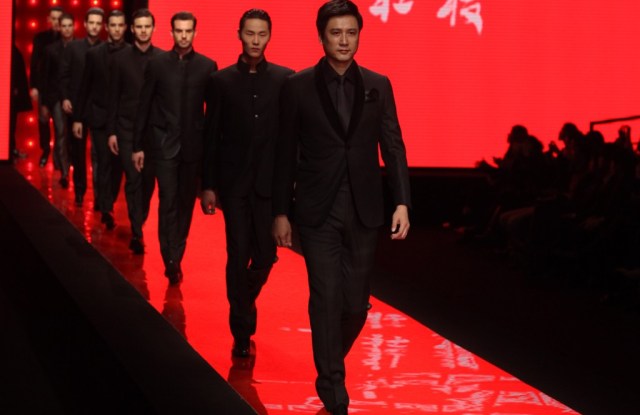 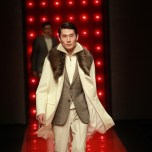 A new line that is the result of a collaboration between the Italian luxury manufacturer Caruso SpA and China Garments was unveiled Friday in a men’s fashion show at the historic Beijing Hotel as part of Mercedes-Benz China Fashion Week.

The show introduced SheJi-Sorgere, a high-end Chinese men’s power brand, with a mixture of fur-collared jackets and coats, a series of suits in muted colors with short jackets, longer tweed coats, and white knit fishermen’s sweaters paired with more-formal pants. It’s being billed as the first made-in-Italy luxury menswear brand specifically for China. SheJi means “nation” in Chinese while Sorgere translates as “to rise” in Italian.

The prevailing theme was an Oriental influence, with multiple suits reflecting a Mandarin style, mostly in subdued grays, browns, and charcoal black. Some of the Mandarin collars were paired with bow ties or knotted scarves and several were designed in a floral brocade that softened the rather spare look of the collection. Other suits seemed to reflect the look of a Mao suit or military uniform.

Between runway strides, video montages offered tributes to Chinese and Italian culture, first starting with iconic images of China, from the Forbidden City to the mountains of Guilin, followed by clips from the classic 1953 movie “Roman Holiday” starring Audrey Hepburn and Gregory Peck, and ending with a series of shots of Mao Zedong, Zhou Enlai and Deng Xioaping.

“The fact that they showed pictures of Mao means this may have the highest blessing,” said Caruso chief executive officer Umberto Angeloni after the show. “They’ve also recognized that to be recognized as luxury, it has to be from Italy.”

Nevertheless, much of the collection emphasized a casual look, with models frequently striding on the runway with hands in their pockets, wearing down jackets over formal silk suits, jackets with red elbow patches and very few neckties.

Just a handful of suits brought in color and they were striking: short velvet jackets in bold plaids of red, pink and green.

Designer Francesco Fiordelli, who has worked for Gucci and Hugo Boss and has lived in China for eight years, bowed to the rather quiet crowd as operatic music soared at the end of the show. A studio, located at the headquarters of China Garments in Beijing’s Chaoyang district, has opened for VIP clients who would like to shop and be fitted for the collection.