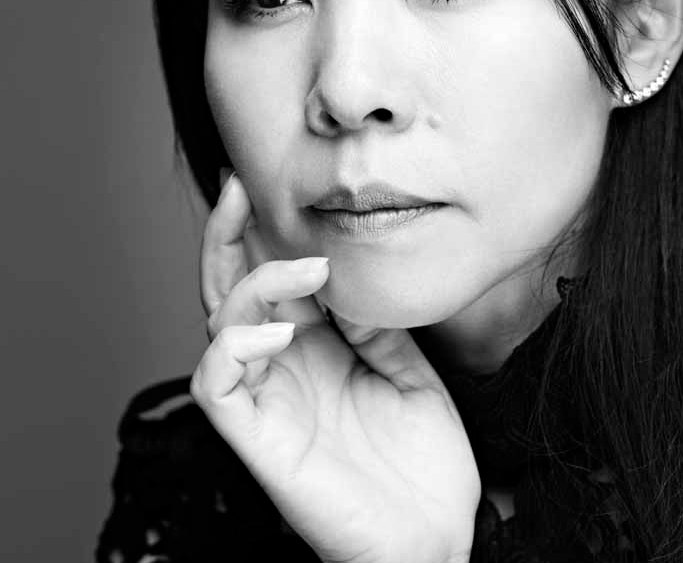 She launched her label, Sacai, in Tokyo in 1999 but didn’t hold her first runway show until 2011. She regularly crossbreeds multiple garments into couture shapes. And she counts both Birkenstock and Nike among her recent collaborators. The designer behind one of ready-to-wear’s most-talked-about labels pretty much defines “against the grain.”

“Ever since I started the brand, I have thought that I wanted to have a special kind of existence,” she says of her label Sacai, which is a variation on her maiden name, Sakai. “So I didn’t open my own shop [for a long time], and for example, it took a really long time for me to start doing runway shows. The reason for this is that I didn’t want to do things in a regular way, or in a way that everyone else was doing things. I was always thinking of a way I could do things that would go against people’s stereotypes or preconceived notions.”
In Abe’s case, the slow-and-steady approach has paid off.

Seventeen years after launching Sacai, she has gained a cult following around the world for her deconstructed yet surprisingly wearable clothes, created by combining contrasting textures and proportions, and splicing together elements of different garments to create something entirely new. Among her high-profile admirers are Karl Lagerfeld, Gwyneth Paltrow and Pharrell Williams.

“People who knew [Sacai] before have always known it, but now I think it’s gotten to a point where a lot more people know it,” Abe notes.

Possible reasons for this, she says, include the opening of her first flagship store in Tokyo in 2011 and her staging of fashion shows during Paris Fashion Week, which she’s been doing since fall 2011. “But those many years I spent doing other things are still very important to me,” she says. “I didn’t open a store and start doing runway shows because everyone else was doing those things; I did them because I felt inside myself that it was a good way for me to get more people to know about my brand. Everyone says I was slow to do it, but I think it was right for me.”

Until recently Abe had a team of only about 10 people working with her. Even now she runs a very lean operation with roughly 20 staffers in her office and atelier. Yet a continuing growth spurt — according to Abe, sales have been increasing 20 to 30 percent annually, although she declined to specify yearly revenue — has her looking to recruit about 10 additional employees and actively searching for more factories, knitters and mills in Japan to meet product demand.

At the moment, Abe is also Sacai’s only designer, churning out around 500 pieces per year across her main women’s collection, her men’s line, the more casual and lower-priced Sacai Luck brand, and collaboration projects with Nike and Birkenstock. Understandably, this is a lot for one person to handle, so she is looking to add a design team as a part of her recruitment push.

Still, Abe is wary of growing too big too fast.

“It’s a little scary,” she says of her recent success. “I’m a very cautious person, so I always worry that the sales will drop as much as they’ve grown. So I think it’s better for them to grow little by little. I still don’t know what a reasonable amount is for Sacai in terms of the market, but I’m always paying very close attention to the sell-through rate in the shops, not just what the buyers order.”

“Sacai has the potential to be one of the megabrands of tomorrow and it has demonstrated strong and consistent brand identity season over season,” says Michael Mok, general merchandising manager of Joyce Group, which over the past decade has played a key role in establishing the label as Abe evolved her craft from knitwear to a full range of women’s wear signified by her pleated panels. In January, Joyce and Abe partnered to open a Sacai women’s flagship in Hong Kong’s new fashion hub, On Lan Street. “It has been very successful in the market,” according to Mok. Another store will open in Beijing at the end of this month.

Sacai is also in talks with South Korean department store operator Shinsegae Corp. to open a store in Seoul, perhaps later this year. And as the first step toward having a permanent retail presence in New York, the brand launched an office there last October.

Until now, Abe has managed to remain true to her easily recognizable signature aesthetic, while still creating collections that look fresh each season. She says that every time she begins the design process, this is one of her greatest challenges.

“Rather than trying to remain original by completely changing the look each season, I have used the same things as the foundation [for my designs] for 17 years,” Abe says. “I try to create a balance between stability and betrayal. The stability is something that looks like Sacai. The betrayal is something new and different. I always design my collections with that balance in mind.”

Even before she knows what kind of clothes she is going to make, Abe begins each collection with fabric selection and development. She starts with very “abstract” concepts, such as wanting something that looks stiff from a distance but is actually very soft to the touch.
“I choose [fabrics] based on intuition, and then talk with the textile manufacturers about how we can make the kinds of things I want,” she notes.

RELATED STORY: Closer than the Front Row with Sacai >>

Abe used the exact same approach with her recently launched collaboration with Nike, which she says took a total of about a year to design because she did everything herself — from fabric selection to the finishing touches.

Mok of Joyce Group lauds the move. “The recent collaboration with Nike,” he says, “gives an indication that Chitose’s energy and uniqueness has gone beyond the borders of the fashion world to attract one of the greatest innovators of our time.”

While Abe notes she doesn’t know how long the Nike partnership will continue, she says there will at the very least be a new offering in the fall. Asked what other collaborations might be in her future, the designer says the best way to guess is to look at what she herself wears each day. (During this interview, she wore a gray-and-black ensemble that included an oversize Nike sweatshirt from her latest collection.)

“The basis for how I decide if I want to do a collaboration or not is just if it’s something I want or not — for example, things that I can’t make with Sacai,” she says. Her collaboration with Birkenstock, she notes, came about because she wanted Birkenstocks that she would wear herself. “I’m very easy to understand — I just do what I like. That’s it.”

Before launching Sacai in 1999, Abe worked under Rei Kawakubo and Junya Watanabe at Comme des Garçons. One essential thing she learned from Kawakubo is the importance of making things that are completely unique and can’t be found elsewhere. Since 2006 Abe has designed a capsule collection for Kawakubo’s Dover Street Market stores in Tokyo, London and New York, so the two see each other several times a year for business. Still, Abe says Kawakubo has remained mum about the relatively newfound success of her former apprentice.

“I don’t say anything about things that other people make, and I don’t think she does either,” Abe says of Kawakubo. “I feel like maybe she is paying close attention to what I do, but she doesn’t really express that in words. But I think the fact that she carries my brand at Dover Street Market is a sign that she is supporting me.”

Other retailers have also been very supportive. Sarah Andelman, creative director of Colette in Paris, bought the first collection and has carried it ever since. And Sacai sits among the top-five performing brands within the Lane Crawford portfolio across Hong Kong and China, according to Kelly Wong, divisional merchandise manager for women’s wear. “Sacai’s aesthetic stands out from any other brand within the Lane Crawford portfolio,” she says, “and its success stems from Chitose’s creative combination of interesting fabrics, colors and seemingly linear yet structured silhouettes.”

But it isn’t just retailers who are following Sacai’s every move. If imitation is the highest form of flattery, then Abe should be feeling pretty loved.

“Often when I’m walking around town, I’ll see clothes that I think are my own, but then when I look closely they’re not,” she says. “Recently that has happened a lot, even in the supermarket. It surprises me.”

This emulating of Abe’s signature aesthetic seemed more prevalent than ever on Tokyo’s runways during fashion week in March, when brands such as Yasutoshi Ezumi and Facetasm appeared to employ some of her techniques. Abe says she isn’t bothered or offended to see other designers doing things that are similar to what she has done for 17 years — but she wishes people would learn from her instead.

“If people want to imitate me, I would prefer they do it in a more indirect way, like not opening a store right away or not doing something just because everyone else is doing it,” she says. “I have been doing this for 17 years, which is quite a long time. I’m sure a lot of designers can gain some great recognition in just two or three years, but this year I’m turning 50 and I would be very honored if people looked at me and realized that there are other ways of doing things.”