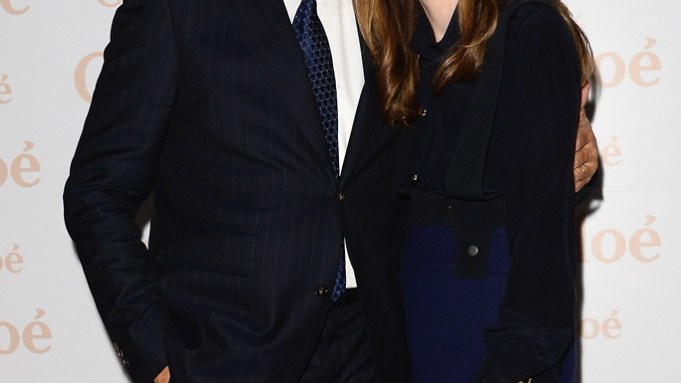 PARIS — Echoing the view from her office on the Avenue Percier on a bright February morning, it’s a blue-sky moment for Clare Waight Keller, the creative director at Chloé since 2011.

The English designer has renewed her contract for an unspecified duration, and has a slew of development projects on the horizon including:

• A new fragrance that’s “more about seduction” than previous Chloé scents and is due out in September.

• A series of pop-up events in the U.S. for See by Chloé, the second line now bearing her imprint and poised for an expansion drive.

• An overhaul of the Madison Avenue boutique in New York to new Joseph Dirand architecture this spring.

• A key opening in Beijing’s Shin Kong Place in the second half that telegraphs the firm’s development in China.

• Building on nascent, but promising categories like costume jewelry and footwear.

One cloud that has drifted from view is speculation that Chloé parent Compagnie Financière Richemont was looking to off-load the brand, and other “soft luxury” holdings, to concentrate on the luxury group’s core watch and jewelry business.

Last November, Johann Rupert, Richemont’s executive chairman and main shareholder, cleared the air, saying he doesn’t intend to make any asset disposals, and instead would invest in the group’s fashion portfolio, which also includes Lancel, Alfred Dunhill and Shanghai Tang.

“We are lucky to have a shareholder with a long-term view,” de la Bourdonnaye said, adding, “We are enjoying a growth which is unprecedented.”

While de la Bourdonnaye declined to talk figures, including how much money Richemont might be putting at Chloé’s disposal, he cited strength across multiple channels and product categories as Waight Keller’s makeover gains traction.

A soft-spoken and even-keeled woman who trained at the elbow of Ralph Lauren early in her career, she learned from the American designer the importance of consistency, something she’s been methodically constructing in the three years since she joined Chloé from Pringle of Scotland. While she didn’t engineer any radical fashion makeover, Waight Keller has brought stability to Chloé after a revolving door of designers left its fashion image fuzzy.

“The house was in a period which was open for a new vision, which I was really excited to embrace,” she said. “I have certainly experienced it before in my career where people have a vision of a brand and it takes a while for them to come around to a new one. I think we’re really seeing the fruits of that now.

“I feel as though Chloé has a unique place being such a feminine brand and we stand apart because of that,” she added.

According to de la Bourdonnaye, Waight Keller has crystallized the brand’s youthful, unfussy approach to luxury, and unified the image across various product categories and in advertising campaigns. She also unleashed her first hit bag with the Baylee, which heralded a new vocabulary for the brand’s leather goods hinged on powdery colors, daywear-driven shapes and signature hardware such as bracelet chains.

“She has really given a new momentum to the brand,” the executive said, describing the Baylee as the “best launch in many years,” resulting in waiting lists.

The executive allowed there were “production issues” at the company overall that have since been resolved. Last November, while discussing first-half results, Rupert cited deterioration in the performance of Chloé, mentioning “disappointing sales,” and adding that Chloé had a “bit of a timing issue” with one of its new collections.

The Swiss-based luxury group does not break out results by brand. In the three months to Dec. 31, sales of “other” brands in the group’s portfolio — which includes the Net-a-porter Group as well as its fashion labels — climbed 9 percent.

Of historic handbag lines, the Paraty and Marcie ranges are being carried over, joined by newer styles such as the Clare, Dree and Drew bags, introduced during the pre-fall market.

De la Bourdonnaye said now that Waight Keller has built up her teams and gotten ready-to-wear on a solid track, she can devote more attention to ancillary categories such as footwear, and See by Chloé, whose December market produced “numbers way above our expectations, so we know the revival is ahead of us.”

He said the contemporary line has particular potential in the U.S. and Japan, where there are already about 20 shops-in-shop for the brand.

China, meanwhile, is a development focus for the main collection, with two boutiques to be added in 2014. Chloé already has nine stores on the Mainland “so that’s a major step forward,” de la Bourdonnaye said. “Traditionally, we’ve been really strong in Japan, but now China is coming up.”

He allowed that the company’s Chinese growth has moderated along with the rest of the luxury segment, and “Paris has been a bit tough in the last quarter. But London is amazing, Taiwan is amazing, Japan is growing, the U.S. is growing.”

The forthcoming Beijing unit and the Madison Avenue flagship will be the latest to bear the new boutique concept by Waight Keller and Dirand, one that exalts categories such as footwear and incorporates retro touches like sofas and shag carpets amid a romantic palette of makeup shades and rounded architectural shapes.

About 20 percent of the store network has been made over to the new concept, de la Bourdonnaye said, noting that refurbishing existing boutiques — including U.S. locations in the Bal Harbour Shops in Bal Harbour, Fla., and South Coast Plaza in Costa Mesa, Calif. — would be the priority in 2014.

Net openings this year should come to less than a dozen stores, he noted. Chloé ended the year with 93 directly operated stores worldwide, including shops-in-shop, of which 59 were Chloé, 28 were See by Chloé and six were outlets.

Earlier this year, Waight Keller unveiled a spring campaign by Inez van Lamsweerde and Vinoodh Matadin, returning to the brand after a four-year absence and capturing what she called “that sense of freedom and lightness,” along with a camaraderie among women.

Chloé has had a recent history of young, British designers —Stella McCartney, Phoebe Philo and Hannah MacGibbon — most of whom commuted to Paris from London. Not so Waight Keller, who credits a move to Paris for shaping her approach, and deepening her commitment to the brand.

“Being in Paris has been a very huge benefit to the cultural spirit of the house, and a personal one as well,” she said. “You really do change the way you think about design when you are working in a different company and different atmosphere.”

She praised the proximity to specialty ateliers and artisans, concentrated in the French capital, and Chloé’s own atelier, staffed with talents from top couture houses. “You develop a personal relationship with the way that you translate your ideas with the various different cutters,” she explained. “It really becomes an extension of your own hands and this is something that’s very special and unique.”