The houses plans to launch its own e-commerce site over the next 18 months. 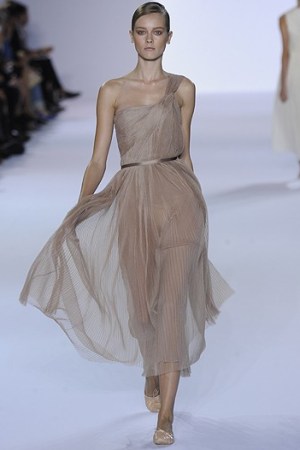 Chloé just feted its fifth anniversary in China by live-streaming a runway show of its spring collection. And the house has another high-tech project in the works: it plans to launch a global e-commerce site within the next 18 months.

Chloé chief executive officer Geoffroy de la Bourdonnaye said the new site, which will permit orders from China, is part of the house’s evolving online strategy. In December, Chloé started a Chinese-language blog, which it claims to be the first of its kind from a Western luxury brand. The site, jesuischloe.com, includes company news and information about various products and collections. Friday’s show, which took place at the Shanghai Expo Center, was broadcast live on both the Chinese blog and Chloé’s main Web site.

“It is a test, and it is a way to actually innovate,” said de la Bourdonnaye of the Chinese blog. “There is no grand plan of doing something with it other than allowing the customers who love Chloé to connect with us and participate in the event in an interactive way, but there might be some other ideas coming up at the end because we will take time to analyze the reaction. We are using technology wherever it serves our purpose.”

The Chloé executive said the label has not been able to expand e-commerce initiatives outside of Western markets because of a lack of suitable partners. The company works with Nordstrom, Neiman Marcus, Barneys New York and Net-a-porter to sell products online.

China has more than 400 million Internet users, according to government statistics. Middle-class consumers, the largest drivers of consumption in China, are almost entirely online, according to a 2010 McKinsey & Co. study.

Establishing a presence on the Chinese Internet is becoming increasingly important for retailers seeking a bigger share of consumers here, particularly those living in second- and third-tier cities who have access to the Internet but not necessarily access to brick-and-mortar stores.

Giorgio Armani SpA, for example, launched an online store in China in November. Adidas AG and Uniqlo have flagship e-commerce portals on Taobao.com, China’s largest online shopping site, while Lancôme’s e-community site, Lancôme Rosebeauty, has become the third-largest beauty forum in the country, according to AdAgeChina.com.

According to a 2010 KPMG study, the in-store experience is still of prime importance to Chinese luxury consumers. The study notes that social media, including blogs, can be an important tool for retailers, including those selling luxury products, to engage potential customers in China. One in five Chinese consumers between the ages of 18 and 44 will not purchase a product or service without first doing online research, KPMG said.

By the end of 2011, Chloé, which is part of Compagnie Financière Richemont SA, will have 13 stores in China. China will overtake Japan to become the number-one market for Chloé within two years, said de la Bourdonnaye, who declined to give any sales forecasts for the brand in China.

“They [Chinese consumers] are really catching up,” de la Bourdonnaye said. “It is changing extremely fast, and the sophistication of the consumer, they are not buying logo anymore as much as they are in Japan, or in the world. We are not in people’s faces. We are in people’s minds. You need to get access to their minds or their hearts. It is a long-term initiative. It takes time.”