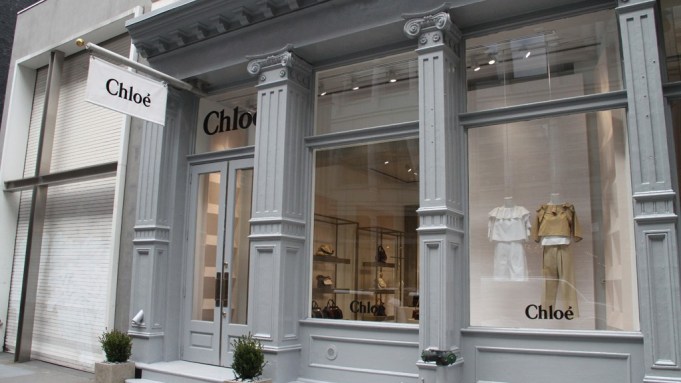 NEW YORK — On the eve of its 60th anniversary celebration, Chloé today is opening a 2,100-square-foot store at 93 Greene Street in SoHo here. Designed in creamy shades of white, gray, beige and blush, the elegant flagship is designed for maximum productivity.

The store intends to put Chloé in the most flattering light with hand-finished details and a skylight artfully trimmed in bronze and black. “We are pursuing an expansive retail strategy,” said Geoffroy de la Bourdonnaye, chief executive officer of Chloé. “We have opened over 20 new stores in the last year, including the first Chloé Maison at 253 Rue Saint Honoré in Paris, in December.”

The new store prototype is being rolled out in existing locations as more stores are being converted. That includes the Madison Avenue flagship, which opened 12 years ago and is quite a departure from the new concept the Greene Street flagship represents. The SoHo unit is the third example of the updated design, following launches in Paris and Shanghai.

Chloé will mark its 60th anniversary by reissuing 16 of the house’s most iconic archival pieces. The Edition Anniversaire, a limited-edition collection, includes items such as Karl Lagerfeld’s violin dress from spring 1983; Stella McCartney’s pineapple shirt, spring 2001; the Paddington Bag by Phoebe Philo, spring 2005, and the cape and leather shorts by Hannah MacGibbon from fall 2009.

The SoHo store is divided into three distinct areas. The front of the store houses handbags, including the new Amelia bag designed by Chloé creative director Clare Waight Keller. The SoHo unit will exclusively carry in the U.S. the Amelia style embellished with ostrich leg in two colorways, chianti and brown, for $4,440. Another version of the Amelia handbag sports gazelle fur on the flap and is $3,395. The Alice bag “has been a huge success,” said de la Bourdonnaye, referring to the satchel-shaped handbag at $1,975.

Italian Paloma marble covers the floors of the first and middle room, which is devoted to shoes, accessories and jewelry. Counters are marbelized pink resin and products sit on slabs of Pierre de Café marble. Custom-made brass fixtures look like fancy rolling racks. A three-dimensional wall behind the cash wrap — one of three in the store — is handmade from plaster. Seventies-era furniture includes a pair of vintage Twenties Bidendum chairs by Eileen Gray.

The Greene Street unit is Chloé’s seventh store in the U.S., and the brand is planning more. “Manhattan is a unique market that caters to diverse clientele,” said de la Bourdonnaye. “There is much opportunity in the many eclectic neighborhoods where tourism thrives and loyal locals are dedicated to quality as well as trends.”