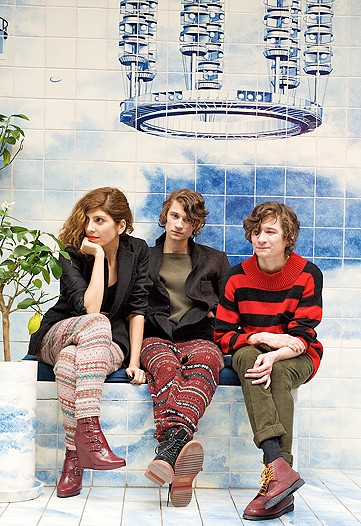 “The references are all over the map,” said an unapologetic Chloë Sevigny, chatting about her latest collaboration with Opening Ceremony — a unisex collection she unveiled during London Fashion Week. The line, which she showed Sunday at the Double Club, was a “slight homage” to one of her favorite designers, Miguel Adrover, said the actress, but it also had dashes of what she called “gay lumberjack,” James Dean, preppy New England and English punk. Highlights included skinny moleskin trousers, Fair Isle, tiger and leopard-patterned knits, little tweed blazers, dyed thermals and oversize jackets that fall past the hip. It was conceived as a men’s collection that women could also wear.

Sevigny and Opening Ceremony have also collaborated with Bass on a selection of footwear, including two-tone Weejun loafers and saddle-shoe boots. Other accessories include checkerboard scarves, fabric backpacks with plastic patch pockets and beanies. Prices start at $95 for a fringed scarf and run to $945 for an overcoat. The line will be carried at Opening Ceremony in New York and Los Angeles and stores including Barneys, Colette and Dover Street Market.

The collection is Sevigny’s second for Opening Ceremony and her first foray into men’s wear. “There’s much less pressure doing men’s, and because this collection is unisex and oversized, I felt like I could have more fun,” she said. “Except for the trousers — getting the fit right was really difficult.”

Although designing is just a sideline — she was showing this collection in between filming “Mr. Nice” in Wales and Spain — Sevigny said it’s a passion. “I love pouring my creative energy into fashion during my downtime,” she said.

And this isn’t the end of her work with Opening Ceremony. She wants to continue designing for them, but would also consider other projects. “Maybe I’d do a very small collection for one of the big luxury brands,” she said. “But right now, Opening Ceremony is right — we have a shared aesthetic.”