Three of the fashion house's best-known designers reminisce about their tenure. 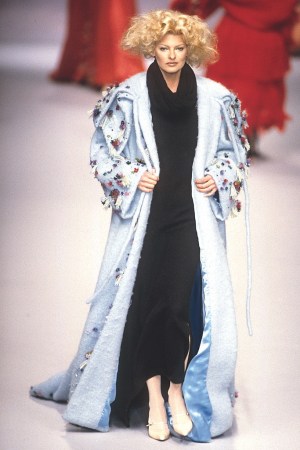 The multitasking designer started at Chloé in 1963, working alongside several other freelance talents engaged by founder Gaby Aghion, including Graziella Fontana, Tan Giudicelli and Michèle Rosier. Lagerfeld took over as the sole creative force in 1966, relishing his collaboration with a dynamic fashion pioneer.

“Gaby was fun, sparkling and witty — very cultured and very funny,” he recalled in an interview. “I like to discuss with women when I do dresses. She was very open, very cultivated.

“We did quite interesting things. What I liked was the mix of feminine clothes and quite wild Pop things,” he continued.

Hand-painted dresses, layered looks and oversize coats were all part of Lagerfeld’s legacy at Chloé. In particular, his early Art Deco collections for Chloé made waves in fashion.

“I don’t like retrospectives,” he told WWD in 1969. “But the Twenties and Thirties were the last epoch near to us when things were still well made…when there was quality.”

While famous today for the elaborate sets he constructs for Chanel, Lagerfeld actually introduced the concept while at Chloé, for his celebrated “Fellini’s Casanova” show in 1977 at the Palais de Congrès, and another in 1978 at the Palais de Chaillot in which models clad in heavy jewelry were penned in a cage and released at the beginning of the show by vivacious model Pat Cleveland.

“We did quite wild things for them. Gaby was never afraid,” Lagerfeld said.

Prints were key to the collections, and Lagerfeld designed them all himself. Italian textile house Bini realized them.

In the Seventies, Lagerfeld took Chloé — built on the concept of luxury ready-to-wear as an unstuffy alternative to couture — to a new zenith. Evening dresses easily sold for more than $1,000 — among the most expensive at that time.

“It’s funny, but often the most expensive pieces — like my Casanova blouses — are the ones the buyers want the most,” he told WWD in a 1977 interview. “I do design for a special woman. She is not necessarily 17, and she is not necessarily 50. I cannot classify my clients as to type or age. But my customers range from people like Gaby van Zuylen to Veronique Peck to Margaux Hemingway.”

And he was eons ahead of the high-low fashion antics of Sharon Stone, who famously paired a $22 Gap turtleneck with a Valentino skirt at the 1996 Academy Awards, repeating the stunt in 1998, pairing a Gap button-down with a Vera Wang skirt.

“I like the idea of showing a soft cotton shirt or jacket with a silk evening dress — mixing the most expensive fabrics with the cheapest. There is humor in this sort of dressing,” Lagerfeld said in 1977.

Lagerfeld credited American department and specialty stores, including Neiman Marcus, Bergdorf Goodman, Bloomingdale’s and I. Magnin, and merchants like Sonja Caproni, Phillip Miller and the late Marvin Traub, for building Chloé’s name and reputation overseas. “They did an incredible job,” he said.

The designer and house parted ways in 1983 at the end of his contract — the same year he signed on as the new couturier at Chanel. According to sources, the Chloé business was in robust health when Lagerfeld left, selling almost as much rtw as Yves Saint Laurent.

“They have been damaging my reputation for years,” he lamented to WWD in 1982, charging the company with selling a “horrible couture line” in the Middle East and for picturing garments in ad campaigns he never designed, in violation of his contract.

In 1985, Aghion and Lenoir sold the company to Compagnie Financière Richemont SA, formerly Dunhill Holdings. “They had to sell very quickly after I left,” the designer explained.

Lagerfeld was lured back to Chloé in 1992 for a final stint during which he turned out a series of dreamy ad campaigns featuring Linda Evangelista — and battled with then-chief executive officer Mounir Moufarrige. “Five years was more than enough,” Lagerfeld said.

In 1997, Lagerfeld was succeeded by Stella McCartney, whose work for the label he came to admire, along with the “more romantic” approach of McCartney’s eventual successor, Phoebe Philo.

When Martine Sitbon arrived at Chloé in 1987, the concept of a young designer rejuvenating an established brand was still in its infancy.

Yet that is what she proceeded to do over the next four years, helping to put Chloé back on the fashion map after the turbulence that followed the departure of Karl Lagerfeld in 1983.

Sitbon, who had launched her namesake label a year earlier, was initially excited to work for the house, which at the time produced some of the most expensive ready-to-wear on the market.

“For me, it was fascinating, because I could work with embroiderers like François Lesage and Montex. I loved the experience,” she recalled. “Everything was made in France and it was semi-couture.”

But the collaboration got off to a bumpy start when she realized she would be part of a team of three creative directors, alongside Samy Shalom, 33, previously with the design studio at Pierre Balmain rtw, and David Chaumont, 25, a former assistant to Christian Lacroix at Jean Patou.

“The way they worked at the time is completely unthinkable today — you had one designer working on one part of the collection, and a different one in charge of the other,” Sitbon recalled. “The collection was a total mishmash.”

Sitbon was ready to slam the door after just six months when a management change at Dunhill (now owned by Compagnie Financière Richemont), the brand’s owner, signaled a change in strategy. Incoming chief executive officer Jaime Rovira chose her as sole creative director, leaving her free reign to impose her signature blend of strict tailoring with softer feminine elements.

“The media reaction was immediately quite positive, and it signaled that Chloé was back with a new, feminine energy,” she said. “It was one of the first houses, if not the first, to hire a young designer and let them design the collection in a way that redefined the identity of the brand.”

The period also coincided with the rise of the supermodel, though Sitbon recalls that her longtime personal muse, Kirsten Owen, was deemed too edgy by Chloé executives and rejected. The designer, in turn, was wary of highly popular models detracting from the clothes.

“One time, I decided not to book Claudia Schiffer again, because all you could hear during the entire show was the photographers shouting ‘Claudia! Claudia!’” she laughed. “But the models gave the Chloé shows a fantastic energy. They were part of the success.”

The search that ended with Stella McCartney succeeding Karl Lagerfeld at Chloé was a long — and significant — one. Lagerfeld had been firmly installed at the house for years, and his replacement was always going to be operating under a magnifying glass.

In 1997, McCartney was 25 years old, and straight out of Central Saint Martins fashion degree program in London. Overnight, she had a major role as creative director, an atelier in Paris — and the gaze of the fashion world upon her.

“I was very young and they were my first ever fashion shows in Paris,” said the designer.

“When I arrived, I always sort of had the feeling that the house of Chloé had this incredible foundation, history and story. It was in need of a breath of fresh air — a new lick of paint.

“And I think I opened up the label to a whole new audience, and brought a more masculine conversation into the brand whose roots were more feminine and girly.”

McCartney made an immediate impact with her tailored jackets and low-rise trousers, boy-meets-girl aesthetic, lingerie-inspired looks and her romantic — and sometimes even folksy — take on fashion.

Her highly anticipated debut collection drew mostly high praise from retailers and critics alike. It was dubbed by WWD as “charming” and “simply delightful, an upbeat frolic with a party atmosphere,” and while she didn’t “set fashion on a new course,” she “has indeed turned the house of Chloé in a new direction — one that’s fresh, young and laced with a trace of English eccentricity.”

The designer, a lifelong vegetarian and animal lover, said she was proud to have stuck to her beliefs during her tenure there. “We used no leather and no fur and I’m proud of that,” she said.

Her stint at Chloé lasted until 2001.

She added she came away with a whole new education: “All of a sudden, I had an atelier, where clothes were handmade, where there was craftsmanship. I got to witness the expertise of the atelier and a fully working fashion house first-hand, with all of its history, talent and knowledge.”