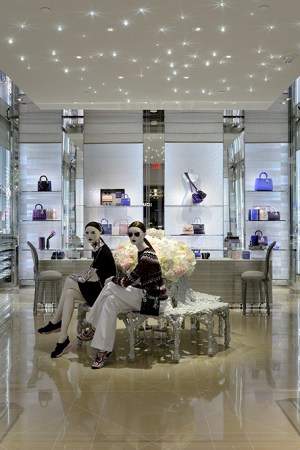 Christian Dior is moving northward in the North American market. Today, the company opens its first Canadian stand-alone store, with a Dior Homme boutique next door, in the Hotel Vancouver in Vancouver, British Columbia. The stores will operate separately, although there is an internal pass-through within them.

As for why the focus on Canada now, Pamela Baxter, president of Christian Dior Couture, North America, quantified it: “Canada is an important luxury market because of its steady economic growth,” she said. “The number of top household incomes grew 15 percent last year, and it’s growing numbers of younger affluent customers. Young men, in particular, have become more fashion focused in the last few years. They are all highly educated, fashion forward and demanding of excellence in the products they choose. Quality and craftsmanship are at the top of their expectations. Luxury sales are on the rise in Canada largely due to this new client, making 2015 the perfect time for Dior and Dior Homme to open their first stand-alone boutiques in Canada.

“The Vancouver luxury market has heated up with new stores opening as well as renovations of existing stores. Asian consumers represent the number-one and fastest-growing nationality for luxury goods worldwide. More than 40 percent of Vancouver population is of Asian descent, many having emigrated years ago.  Dior and Dior Homme have a strong presence in Asia,” she added.

The interiors of the Vancouver stores reflect the Peter Marino-designed concept of Dior’s Avenue Montaigne flagship in Paris. The first floor features accessories, fine jewelry and watches. The upper level offers rtw, eveningwear, shoes and a dedicated VIP fitting room. Unique to the Vancouver stores are several works commissioned from contemporary artists to reflect Dior codes. For example, cosmic ceiling glass and glass text by Rob Wynne, a stainless steel and quartz cocktail table by Damian Garrido, a “Bishop” stool by India Mahdavi, a “Fillo” table by Alexander Lamont and a bench by Christopher Schank, while a video wall by artist Yoram is displayed along the staircase connecting the two floors of the boutique.

There is also a Louis XVI style marble and bronze antique fireplace in the evening salon and zodiac lighting in the shape of the Aquarius sign — Mr. Dior’s sign — in the fine jewelry salon.