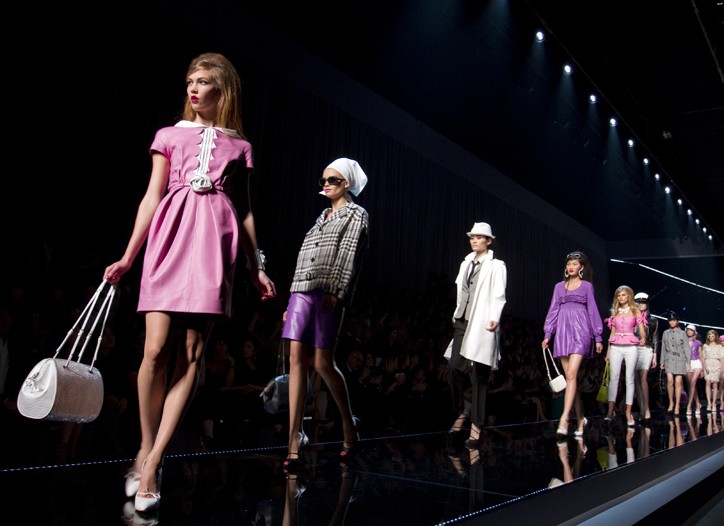 SHANGHAI — John Galliano gave this city a heaping dose of Parisian chic on Saturday night, unveiling Christian Dior’s Nouvelle Vague-inspired cruise collection in a massive tent along the city’s celebrated Bund. The show coincided with the reopening of Dior’s revamped boutique in luxury shopping mall Plaza 66 and the inauguration of a retrospective exhibition. Galliano’s decision to incorporate haute couture creations, such as dramatic organza and tulle gowns, into the show further underscores just how much the house is banking on big spenders in China.

“As a designer, I’m very much sensitive to my markets,” Galliano, who was wearing braided pigtails, told WWD in an interview from the vertigo-inducing 93rd floor of the Park Hyatt, overlooking the city’s sci-fi skyline of spires and skyscrapers. “[China is an] emerging market and a big player in the field and very thirsty to understand couture, craftsmanship and the savoir faire Français.”

Although Dior chief executive officer Sidney Toledano declined to disclose sales figures, he said Dior is registering “very strong double-digit” growth in China. “Price is not a problem,” he said, adding there were some customers who insisted on coming to preview the Plaza 66 store’s new Parisian decor a day before it opened to the public and place orders. “It’s a market that is growing at a speed…not only numbers but [in terms of] the depth of their understanding and demand,” Toledano said.

Although Galliano has referenced Asian themes in several of his past collections, the designer said he thought it was important for Dior to make a characteristically French statement and “capture the exuberance, the energy” of French New Wave cinema and its heroines, Jean Seberg, Romy Schneider, Jeanne Moreau and Françoise Hardy.

Karlie Kloss opened the show in a dress of butter-soft pink plissé leather with scalloped details as a miniature orchestra harmonized to a rousing soundtrack of Diana Ross & the Supremes’ “Love Child.” Galliano progressed to flirty frocks in striped knits and delicately faded rose prints. He also revisited the iconic Bar jacket — one version came in Prince of Wales plaid with cap sleeves and a large bow. “You can imagine her — that type of character — on the scooter with a boyfriend with a helmet racing through Paris,” he said. A series of embroidered silk gowns in mint, candy pink, apricot and lilac closed the proceedings with a glamorous flourish.

Galliano said he sought to create a “Left Bank, gamine, lovers-on-the-Pont Neuf” vibe, which he believes will resonate with women in both France and China. “I think our Parisian and Shanghai sisters — they both share the same love and passion, which is for tradition and innovation,” Galliano said. “They’re both so thirsty for new technology but still have a great respect for the tradition and I think that’s where I draw the parallels between the two women.”

Before the show, Dior premiered its new advertising vehicle: a 12-minute film by David Lynch called “Lady Blue Shanghai,” which features Marion Cotillard and a mysterious Lady Dior handbag that prompts her to recall a dreamy, romantic tryst. Cotillard, clad in a pale yellow dress, also made an appearance at Saturday’s show, along with Dior’s other leading lady, Charlize Theron, and actress Maggie Cheung. Another front-row guest, R&B singer Kelis, performed to a packed after party, which saw both Galliano and Toledano dancing on the DJ’s platform.

The show and party attracted a diverse crowd including many fashion-forward Chinese, most of whom reacted positively to the show. “This is my first Dior show, because the shows have always been in Paris. I was very excited,” said Zhou Yingying, a 20-year-old from Shanghai. “I was surprised to see that the clothes were so suited to our age.”

Guan Anna, another 20-year-old from the city, was just as upbeat. “I love Dior because of Galliano,” she said. “He’s very ku [the Chinese slang word for cool].”

Holed up in the Park Hyatt hotel for fittings, Galliano said he hadn’t had time to visit the city this time. Dior transported about 150 people to Shanghai to produce the show, including his design team, makeup artist Pat McGrath, hair stylist Orlando Pita and models Kloss, Magdalena Frackowiak, Tanya Dziahileva and Anja Rubik.

And Dior & Co. may be gearing up for more road trips. “I think the cruise opportunity is fantastic to go to a new market. This year it’s in Shanghai. I’m sure next year it will be somewhere else,” Toledano said. But he stressed that these global ambitions — for both cruise and the rest of the business — don’t mean the house is forsaking the U.S. market. Dior has showed cruise in New York three times, and he said the market continues to be an important part of Dior’s business. To that end, the brand plans to refurbish and reopen its New York flagship later this year. Toledano said he hopes that will occur in November. “I’m sure we’ll have something special there,” he said.

In the meantime, Dior is dominating the scene at Plaza 66, where its ads are plastering the mall. A giant sculpture of a Lady Dior handbag in bars of lights sits outside the main entrance to greet shoppers, many of whom are in town for the World Expo. Inside, the retrospective exhibition chronicles Dior’s 64-year history, running from Christian Dior’s original New Look pieces to some of Galliano’s most outlandish couture creations, including a 2004 number made entirely from strips of gold metal. There are also plenty of high-tech touches, like a giant e-book with pages that can be flipped by hand.

Near the exhibit sits Dior’s newly refurbished 5,167-square-foot boutique. Designed by Peter Marino, the store features a curved staircase, French-style moldings and a wall of video screens displaying runway footage and other iconic images from the house’s history. It also houses a dedicated salon for fine jewelry and watches, which will be rolled out to other Dior boutiques. Marino, on hand in all his tattooed and leather-clad glory, said he was particularly proud of the store’s second-floor ceiling featuring porcelain lily-of-the-valley blossoms handcrafted by artist David Wiseman.

Galliano, for his part, said he had enjoyed some of Shanghai’s customs, especially those of the chakra-aligning persuasion. “The first thing I did here was have acupuncture,” he said. “I have to kind of contain [my energy] and give it to the girls on the day of the show.”