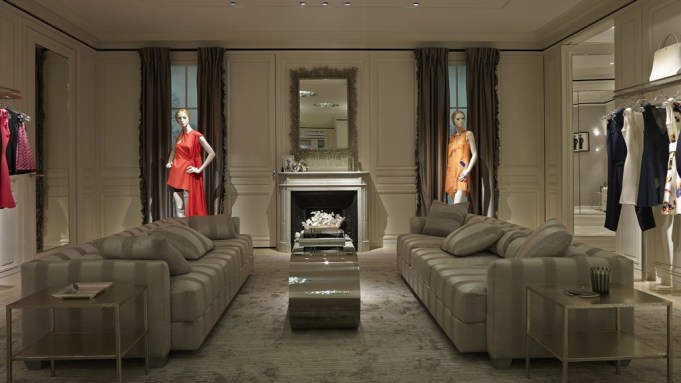 Sixty-five years after Christian Dior’s collection first bowed in Sydney, his brand is finally getting its own Australian flagship.

Christian Dior SA today will open an 8,072-square-foot store at 65 Castlereagh Street here, one block down from David Jones — the Australian department store which presented 50 original Christian Dior creations in 1948, the first time Dior’s collection had been shown outside Paris.

It is the world’s first Dior boutique to carry the debut spring ready-to-wear collection designed by new creative director Raf Simons, as well as two limited-edition products created exclusively for the Sydney launch — a soft pink version of the Lady Dior handbag and a silk duchesse satin Roses printed dress.

The latest addition to Australia’s burgeoning luxury brand lineup, which has seen an acceleration of new openings and refurbishments over the past two years, the store will sell the complete women’s and men’s rtw collections for the first time, as well as leather goods, shoes, sunglasses, scarves, jewelry and timepieces.

The interiors feature Dior’s signature 18th-century detailing; Dior gray furnishings; a wall featuring a series of Oyoram plasma screens programmed in synch with other Dior stores, presenting runway footage and graphics, and a labyrinthine suite of elegantly appointed “VIC” (Very Important Client) suites on the fourth floor that are designed to look like an apartment, where customers can get up close and personal with the collections.

According to Christian Dior SA chief executive officer Sidney Toledano, who was in town for Thursday night’s opening, Christian Dior has experienced double-digit growth over the past three years in Australia, where the company operates boutiques within David Jones’ Sydney, Brisbane and Melbourne stores, and DFS Galleria in Sydney’s Rocks district.

Sydney is the latest addition to Dior’s new or revamped flagship lineup in the Asia-Pacific region. Extensions to the company’s three boutiques in Hong Kong are under way and the close of 2013 will see the company’s third boutique open in Bankgok, its second in Vietnam (Hanoi) and a large flagship open in Jakarta. Last year, Dior opened a 19,410-square-foot flagship in the Taipei 101 development, the company’s biggest boutique in the world — although perhaps not for long.

“Who knows, maybe Avenue Montaigne will become bigger, other locations will become bigger,” said Toledano. “It’s not a question of size, it’s a question that we had the opportunity in Taipei. The idea is not to present a thousand items, it’s more to give space. We want people to have VIP rooms, if they want to spend three hours or a full day in the boutique, to have space to enjoy and discover the collection. It’s the kind of culture that comes from the couture experience. We’re not in the fast retail business.”

With a second Australian boutique also in his sights “in coming years,” Toledano said he is considering the possibility of doing an haute couture presentation in the country.

“We think that we have to present the couture more and more,” said Toledano. “Every year we go twice a year to New York, we did Shanghai last year and I’m sure we will be going there again this year. Paris is fantastic, the press is coming from around the world, and new customers. Business is strong. You have younger customers and frankly with Raf, we are attracting a lot of new clients as well. The last collection was very successful. So why not come to Australia one day? I tell you, the center of gravity is changing and the distances are becoming smaller.”

The Dior ceo was even more excited about Australia later that night at the opening party, when he said, “I’m going to call Raf right now and tell him, ‘You have to come here!’ I like the spirit here. It’s a combination of culture, open-minded people and you are very far from the European tension — there, people complain about the government. [Here], there is something positive.”

With Australian Prime Minister Julia Gillard suddenly calling for a September election on Wednesday — a day before former Labor MP Craig Thomson was arrested on fraud charges — politics was in fact never far from the party talk, as the crowd milled around the store.

Also on deck: 22-year-old Melbourne newcomer Elizabeth Debicki, who will appear as Jordan Baker in Baz Luhrmann’s “The Great Gatsby,” which is due for release on May 10. “I’m just going to let it happen and not stress about it,” said Debicki of her imminent first red-carpet whirlwind. “When the panic is in your eyes you can’t see anything.”