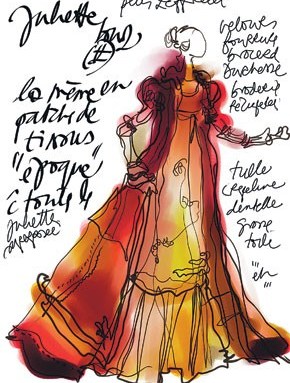 For a guy who had spent most of the previous night’s transatlantic flight writing, Christian Lacroix was in top form, showing his trademark Gallic charm during an interview last week at the Gramercy Park Hotel.

In town for the opening party for his East 57th Street store, Lacroix explained his five-year absence from New York quite simply, “I’ve been busy.”

Aside from tasks tied to being the curator of this summer’s Rencontres D’Arles photography festival, the designer is busy leaving his artistic imprint on the Arles Musée Réattu from May 18 through Oct. 30. Under the gun to finish writing the catalog and organize sketches for the latter, Lacroix typed through the night.

For the past three months, he has been overseeing the museum’s renovations — painting the walls bright colors and the like — in time for next month’s exhibition, which will feature old paintings mixed with contemporary art, as well as fashion.

Looking none the worse from the wear of his journey, Lacroix, who turns 57 next month, explained, “Of course, I’m still in love with fashion and couture. But I think today they have to share other areas. Fashion for me is just a little bit over. That’s why I like to have some new blood by working in hotels, theater and other projects inherent in art.”

Lacroix’s non-fashion portfolio is lengthy, including the interiors of the French National Railway’s high-speed trains, a smattering of boutique hotels, multiplex movie theaters for Gaumont in France and costumes for various theatrical and dance performances. Earlier this month, the limited edition, bride-shaped water bottle he designed for Evian was released. And his exclusive spring collection for La Redoute features such far-flung combinations as garden furniture, a beach towel, a rag doll and a poncho.

Two weeks ago he trekked to Dubai to meet with a Middle Eastern company that is developing luxury living spaces in the Middle East and North Africa, and has recruited such talent as André Putman. Lacroix said they “loved” what he proposed and he will design everything except the furniture. The designer’s approach is two-fold — minimalist contemporary interiors and more baroque and opulent environments, which should appeal to Russian investors in that region of the world.

A week ago he met with the owners of the 17-room Hôtel du Petit Moulin, which he helped design a few years ago, about updating the rooms, which he said was always part of the original plan. “The concept was to have each room different, to have customers be surprised each time they visited. I like this kind of investment,” he said.

He also designed another boutique hotel in Paris, Hôtel Le Bellechasse, and has committed to designing two more there.

Lacroix draws on his own design sensibility regardless of the arena he is working in. “I have always said in my couture house that we should not try to compare and be on the same track as other designers. Some are not so sure that we need to be so different,” he said with a laugh.

During his New York sojourn, he also was dealing with a bit of resistance regarding his proposed renovations for a Paris theater from the Twenties or Thirties for Gaumont. “I think my duty and work is to protect old things from the past and to transform them into the future so they are not only popcorn factories,” he said.

He also has created the costumes for the forthcoming “Romeo & Juliet” production of Opéra National de Paris, and is trying to iron out plans for a cultural center or arts foundation in his native Arles. “I want to be more involved in art things and be involved with anything connected with the south of France,” he said. “I am very proud and concerned with the south of France.”

The idea of working in various mediums is right in step with this Informational Age. “Our period is like the Internet. There are so many messages colliding. My work is based in historic and new things, East meeting West,” Lacroix said. “It’s really my way of living. I’m only interested and excited about the extremes in life. Life is short. Sometimes you have to be a workaholic.

“I can’t say ‘No,’ especially if something excites me. I have never agreed to do anything just for the money or prestige,” he said. “I really think for me it’s about proving myself and being able to do the best. When I was a child, my father was not rude but he was very severe. Being third or second in class was impossible. By nature, I’m a lazy guy.

“Frankly, I do think, without sounding like an old soldier, that before AIDS and other crisis, everything was easier. Everyone was more open-minded and had a fresh way of looking at life. Being 16 or 17 during May of 1968, there was a little revolution in Paris. It felt like the world, the city and the country were having the same seismic thing.”

And all these side projects stand to enhance his fashion business, he insisted. “For me, it’s the same universe whether I’m working on a bag, a lamp, lace or a dress. I have the same enthusiasm, the same excitement.”

At this stage in his career, Lacroix said he is not looking to add any new licenses to his company. In fact, after the Falic Group bought Lacroix’s company from LVMH Moët Hennessy Louis Vuitton more than three years ago, the new owners weeded out ancillary licenses like children’s wear in order to focus on Lacroix’s signature and couture collections. Lacroix was the only fashion company LVMH has started from scratch, but under its tutelage the label was said to be splintered with diffusion lines.

Lacroix said around the millennium he became disenchanted with LVMH and needed to express himself more. “It was a little asphyxiating. I wanted to prove I was able to work as an adult human being,” he said. “Some said I was very talented, a kind of a genius but so difficult and sometimes immature. But I’m not. I wanted to prove to people that I could compete for and deal with very difficult and important companies such as the French Railway. It was not as though they said ‘Just give it to Lacroix to be nice.’ I had to compete and fight against other good designers for the trains, for the movie theaters….That gave me a more confident way of being and made me more dynamic in fashion.”

While popping into a few art galleries and shops last week, Lacroix took note of the street fashion. “I felt it was a little less eccentric and a little less ‘Wow!'” he said. “But I’m from the generation of Ladies Who Lunch. It’s changed a lot.”