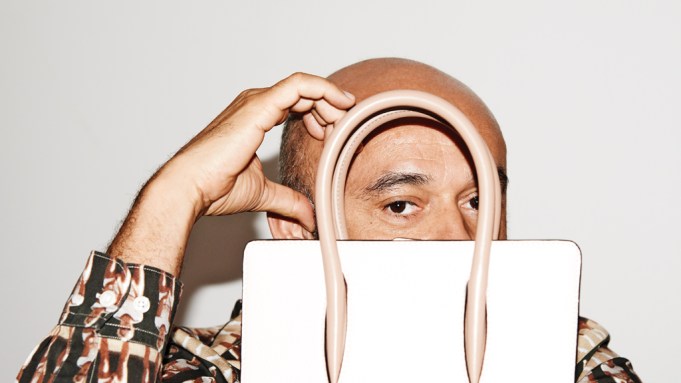 Why shouldn’t a tube of lipstick be so gorgeous you could wear it like an amulet dangling from a fine chain? And why shouldn’t a handbag be imbued with all the drama and sass of a cabaret performer, the flesh-toned handles kicking out of the black leather side panels like Dita Von Teese’s gams from a velvet curtain?

One has to hand it to Christian Louboutin: He thinks differently, strives for the exceptional and continues to add heat to his formidable footwear-based business.

Later this year, the Paris-based designer will introduce Rouge Christian Louboutin Lip Color to echo his famous soles — plus 37 other shades — and he’ll start shipping the Paloma bag, the linchpin model of a revved-up leather-goods range hinged more emphatically on brand codes such as spikes, animal prints and that famous red.

Unveiling the twin product volleys exclusively to WWD, Louboutin describes an unhurried, organic and hands-on approach to extending his brand and his business, embarking only on projects that feel legitimate and tickle his creative fancy.

“I take time to think,” he says over the line from New Delhi, where he flew in late July to design shoes for fashion designer Sabyasachi Mukherjee, who opened this year’s Amazon India Couture Week. “I basically keep my eyes and my ears open and when it fully makes sense, I just do it.”

This approach also applies to opening new boutiques, guided mostly by customer demand. If the designer is not familiar with a city under consideration for a store, he’ll spend four to five days exploring, dining with locals — and scanning what heels are clacking on the pavement. “If I haven’t seen one red sole during my trip, I do not open,” he says.

While women’s shoes remain the cornerstone of his privately owned company, accounting for about 70 percent of the business, Louboutin has proven how nimbly he can operate in new categories.

Consider his foray into men’s shoes four years ago. In the habit of making shoes for himself to match his colorful, foppish style, Louboutin dreamed up a pair of black leather loafers paved with spikes to attend the Met Ball celebrating the 2008 opening of the “Superhero” exhibition at the Costume Institute of the Metropolitan Museum of Art. Subsequently, pop star Mika approached Louboutin to design footwear for an upcoming tour.

The exercise would ultimately spawn one of his fastest-growing new categories, with men’s shoes now accounting for 20 percent of the business. And it helped put into sharp focus the brand attributes that underpin Louboutin’s business momentum — not to mention the designer’s popularity on social media, nearing five million followers on Instagram.

Among his first customers for men’s shoes after opening a Paris boutique in 2011 were pop singers and elite athletes — men accustomed to performing on a stage, a field or a basketball court. “A sportsman is a showgirl, in a way,” he says with a chuckle, noting NBA stars Kobe Bryant and Tony Parker are among devotees of his expressive and eye-catching high tops.

That echoed one of the original wellsprings of Louboutin’s women’s business: the showgirl in a cabaret, suggesting a woman who is colorful, exotic, sexy and feminine. “It’s a dreamy idea of a woman,” Louboutin muses, describing his designs as “quite fierce,” detail-oriented and resolutely upbeat.

“Everything is made for women who want to be happy and who want to look happy,” he says. “I just favor happiness to darkness. I’m more solar than lunar.”

Indeed, Louboutin has a knack for bringing verve, cheek and surprise to accessories and beauty products, which he favors over other categories.

Asked if he would consider fashion design, Louboutin did not hesitate to dismiss it. “Definitely not clothing. I like small objects,” he says, describing a penchant for miniatures. “In a small painting you have so much to see because there’s so much detail in such a small volume. My father was a carpenter, so I love objects that are really designed. A small object can have as much invention and as much innovation as something big. I’m not of the school that big is beautiful.”

The forthcoming lipstick is certainly one of the smallest Louboutin creations yet — and one of the most expensive in the category, slated to retail at up to $90. More of a precious object than something chucked in a purse, the Lip Colours come a year after Louboutin introduced his first beauty product: a nail lacquer housed in a cut-crystal orb topped with a towering spike. Beauty products now generate about 3 percent of total revenues, according to the company.

Meanwhile, the handbag project, with the first new models shipping at the end of October-early November, is something of a reboot. Louboutin assembled a new team based on the Rue Jean-Jacques Rousseau, home to his corporate offices, workshops, design studios — and a series of boutiques clustered around the 19th-century arcade known as the Galerie Véro-Dodat, where he first set up shop in 1991.

“It’s a bag that really comes from Paris,” Louboutin says, “and is a bit more fierce.” Indeed, with its panels of panther print patent leather and conical gold studs, the Paloma is no prim Margaret Thatcher satchel.

Louboutin’s collaboration with Louis Vuitton last year — in which he, Karl Lagerfeld, Rei Kawakubo, Frank Gehry and others created one-off bags employing its monogram canvas — sparked a rethink of his approach to handbags. He elaborated on the Louboutin brand codes he employed for that project — the red, the spikes, the glossy surfaces — to create the Paloma, and to refresh existing models. “I started as if it was my first collection,” he says.

Among new styles is the cushionlike Piloutin evening bag, a patchwork of elaborate Indian wedding ribbons and soft enough — save for the perimeter of spikes — to rest one’s head on.

Louboutin introduced handbags in 2005 as a complement to the shoes, and at the request of clients looking for evening bags to match their slick, eye-catching shoes. “For me, it’s important to start things and see how it operates, and then I feel completely ready to go to another level,” he explains. “With the bags, there are things in common and there are things that have nothing to do with the shoes. These two twins definitely need to have their own personalities.”

Alexis Mourot, Louboutin’s group chief operating officer and general manager, says handbags and small leather goods account for about 7 percent of the business, and could grow to 15 to 20 percent within three years now that the category is getting more design and management attention.

He notes that Louboutin boutiques, most of them deliberately of a small scale, would be reconfigured to better display the new leather-good assortments. Also, more than a dozen of its key wholesale partners are planning pop-up shops, starting in November, to showcase the revamped designs

Despite the designer’s slowly-but-surely approach to business — and management’s wish to remain a niche player, at least by perception — Louboutin last year sold more than a million pairs of shoes, according to market sources. While the privately held company does not disclose revenues or earnings, Mourot notes “sales have been growing at high double-digits for the last five years,” with business particularly dynamic in American, Japan and Europe.

The company has also made giant steps in changing its business model: Retail generates about 70 percent of revenues, versus 30 percent for wholesale. “Six years ago, it was 5 percent retail,” Mourot says, noting that Asia, Japan and the Middle East have been converted from franchise to direct operations.

There are 105 directly operated Louboutin stores, both freestanding and shops-in-shop, and the number is set to grow to 109 by the end of August. This year, the company is to open 17 stores, and 18 are planned for 2016, including seven in the U.S. and Canada, bringing the complement to 127 locations.

Louboutin continues to wholesale its product lines to 250 doors worldwide. North America remains the company’s largest market, accounting for 42 percent of the business versus 40 percent for Europe and the Middle East and 18 percent for Japan, Asia and Africa.

The designer says he’s approached all the time with opportunities to extend his brand, most of which he dismisses, while others he mulls.

Asked if he would ever consider designing a hotel, Louboutin hints that a project could be in the offing. “That’s a thing I would consider,” he says. “Even home would be more interesting to me, rather than something that is worn. I would consider many things before clothing.”

An avid globetrotter with vacation homes in Portugal and Egypt, Louboutin says exotic destinations feed his creativity, but not in a linear way. “I don’t travel to be inspired, but travel is an inspiration in itself,” he says.

The designer prefers to follow his instincts, not trends, retiring alone to Egypt, Portugal or the French countryside four times a year to sketch out his shoe collections, contemplate them, correct them and perfect them. “That needs a lot of time and I need a lot of focus. It’s the most important part of my job. I didn’t design shoes to build a company. My designing shoes has become a company. I never wanted to build a company. I wanted to build shoes,” he says. “My preoccupation is not to grow.”

Louboutin treasures the freedom to grow at his own pace, and considers his growth organic and natural more than 23 years after founding his company. While he wouldn’t completely rule out a sale of the company one day in the distant future, it hasn’t even crossed his mind. “I love my work and so I have no reason to consider it, and I have no intention to leave.

“I follow my own path,” he continues, adding with a chuckle, “I never sold my soul to anyone, only my soles.”